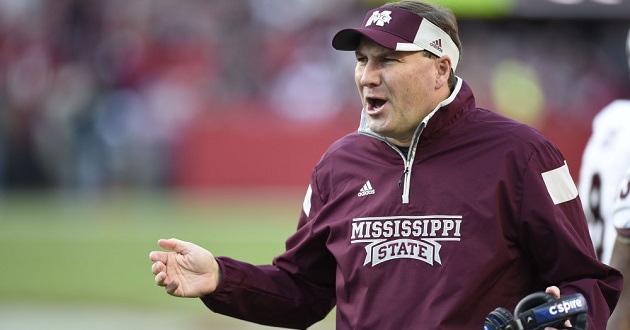 Josh Barnhill is the lead writer for MaroonandWhiteNation.com (@mandwnation), and graduated from Mississippi State in 2007. You’ll remember Josh from the past few years as the guy that grew up an Auburn fan in a family that was mostly Auburn, but now seems to really, really hate Auburn. He was still nice enough to answer questions once again, and I did the same for him.

1. What is a common Mississippi State fan’s current thoughts on Auburn football?

I’d say Auburn is viewed as a tough but winnable game. Every game has and will be tough for MSU, but this is a game that could end up in the W column since it’s at home. And it’s pretty critical is we want to go to a bowl game.

2. What’s the vibe like in Starkville right now? How has the post-Dak era been so far?

Not too great, but mainly because of the South Alabama loss. The South Carolina game cured some ails but fans are still butt hurt about Week 1. It was awful. Need a big win to flip the script.

3. Auburn and Mississippi State have both played LSU. Do you think the outcomes will be indicative of what happens Saturday?

Well MSU played in Death Valley and Auburn played at home so that’s a pretty big difference. But State had a lot of the same struggles with drives stalling out that Auburn did, only State’s were at the 40 instead of in the red zone (punted four times inside LSU territory). If anything, I think the LSU games reveal it should be a close game just as Vegas predicts.

We could play pick-a-Tiger on the D-line but Carl Lawson, obviously – we don’t have a great O-line. Some of Auburn’s young talent at WR but is Malzahn going to play them?

I think both defensive lines are going to stuff the run pretty well.

7. Why do Mississippi State fans insist on breaking the SEC’s rules on artificial noise?

I think the passing games will be the difference. I could see both teams having some big plays in that area even if Nick Fitzgerald and Sean White aren’t really known for that yet. It will probably be low-scoring and I’d take the under on the 52.5 Vegas is putting out. It’s a real coin flip to me just as I’ve felt this game was in each of the last six years….and each team is 3-3. I’ll say MSU wins 20-19.

SEC Championship Review: Not That Day

Lol, hates a war hero, things that most SEC schools have, a street, and arguably the greatest college football player ever. Got it.

You know what I hate? Starkville. The worst excuse for a town in the First World.

Cowbells are awful, unless in an orchestra or on a cow.

Hilarious, as are the above comments! He actually has some good points on questions 1-6 before going all “Stark Vegas” on us. It’s typically a close game. I for one am ready for some separation in our favor! WDE!