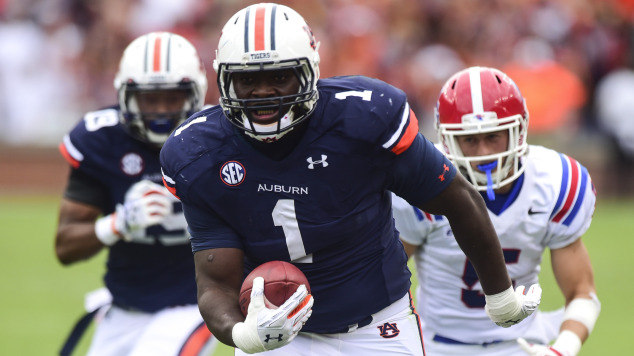 The 2016 season has returned, and the SEC is just going all out. No more practicing. We talkin’ bout practice? It’s here, and most of the SEC is putting it all out there. This is easily the best opening weekend I’ve ever seen. All national media is saying the same thing. And aside from maybe one game, it’s all because of the SEC’s schedule. Seriously, take a look at this thing, and give me your predictions in the comments. Oh, and not too shabby record of picking last year (including the bowls), Blogle. Thank you.

Appalachian State at Tennessee – The Vols were the hot team in the East this offseason. “It’s FINALLY their year,” they say. Appalachian State has been known to ruin a big name’s season before. Remember Michigan? It’s fun to think about, but it won’t happen.

South Carolina at Vanderbilt – The Gamecocks were pretty bad last year, but did beat the Commodores 19-0 midseason. I don’t think they’ll be any better, but Vandy should be. And they’ve got all that home field advantage (in the 4th quarter if Vandy is winning by at least 10 and study hall is done). This is tough. I guess I’ll go with the home team.

Missouri at West Virginia – Country roads… take Missouri… back out of… the SECCCCCCC… West Virginia… beat the Tigers… down the road… take them home.

West Virginia is now officially my second team, and it’s all because of this. And Missouri is undeserving.

LSU vs. Wisconsin (Lambeau Field) – ESPN’s College Gameday is broadcasting from this one. You know, that great college atmosphere at Lambeau Field. This is a matchup of big names, but I can’t think of anything more boring. It’s I-formation after I-formation. If it was in January, I’d give it to Wisconsin. But it’s not.

UCLA at Texas A&M – UCLA is ranked. Texas A&M is not. That will change after this game. Texas A&M has a quarterback and 100K fans partaking in the excitement of game one. It may not last, but they’ll be lit and they’ll take down the “we are ranked because we play in the Pac-12” Bruins.

LA Tech at Arkansas – The Razorbacks ended last season winning six of seven and the one loss was by one point to Mississippi State. They were typical Arkansas, though. Not good enough to beat most of the big dogs, but good enough to ruin some seasons. I don’t know how good LA Tech will be, but I’m guessing not as good as Toledo, who beat Arkansas last year in their uber-typical year.

Georgia at North Carolina (Georgia Dome) – Georgia shouldn’t be very good. They have a new head coach, who is only getting credit for his past boss. Georgia will always have talent, but that talent has gotten them one SEC title in 10 years. Their quarterback situation isn’t certain as well. North Carolina was 11-1 in the regular season last year, and they should be just as good. they’ll beat Georgia in their home state.

Southern Miss at Kentucky – The Golden Eagles made it to the C-USA Championship Game last year. They lost, but it’s better than Kentucky saying they were finally going to get over the hump for the 12th year in a row. Are they in line for basketball tickets yet?

USC vs. Alabama (AT&T Stadium) – Part of me thinks USC has a team worthy of taking down a quarterback-less Alabama in Dallas, but we’ve seen this all before. USC only has a chance if they blow out Alabama at the start, and that won’t happen. Blah.

Clemson at Auburn – Check back tomorrow for my prediction in the game preview, but SPOILER ALERT: big fun.

Ole Miss vs. Florida State (Orlando, FL) – Ole Miss has a pretty stout September and it starts in Orlando. The Seminoles are supposed to be near the caliber of the Free Shoes University days. Ole Miss may be as good as last year, but I doubt it. When you cheat in football, it eventually evens itself out. I see Florida State rolling.

Notre Dame at Texas (9/4) – Normally I have at least two games in this section, but this is literally the only game in the nation that isn’t terrible and doesn’t include an SEC team. The rest of the nation should be ashamed. Notre Dame is poised to be pretty good. But that’s what they always say. Texas still hasn’t shown they are back. Maybe they are, and maybe being at home will help. Actually, yeah, they’ll win.

From the Other Sideline – Purdue