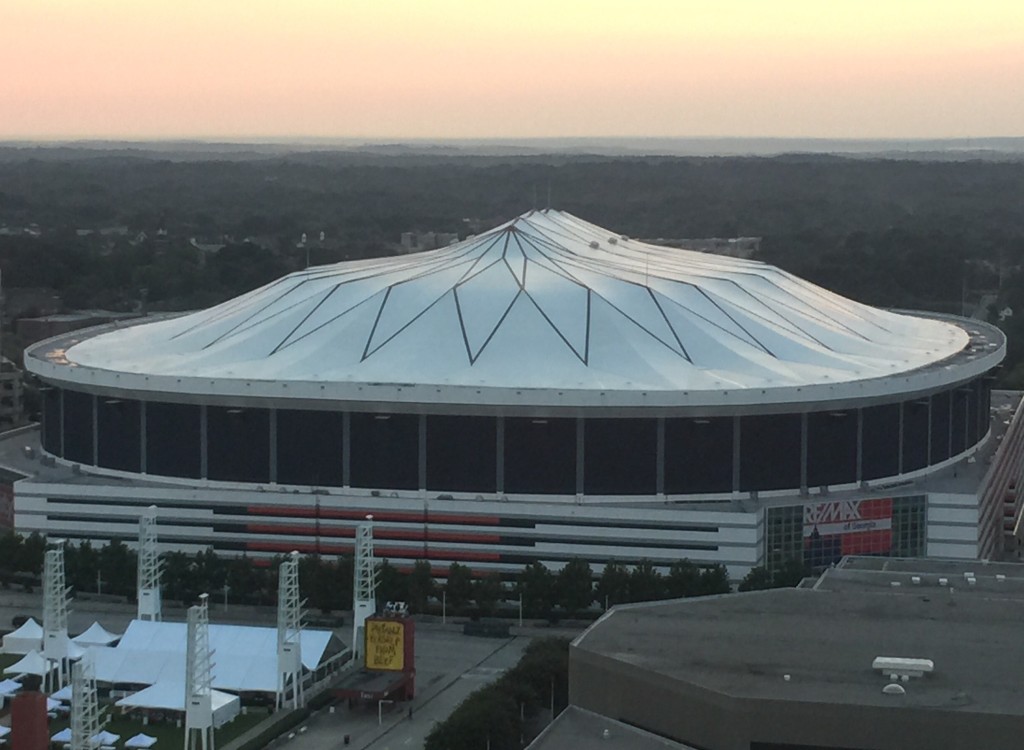 The Chick-fil-A Kickoff Weekend began with a quick trip up I-85/75 to the heart of downtown Atlanta. Thanks to a partnership with AT&T, @BeautifulBlogle and I we were put up on the top floor of the Omni Hotel overlooking the grounds of the Georgia Dome and Centennial Park. The first thing I did when I saw the view was snap a picture of the Dome with the brand new Galaxy S6 Edge Plus they provided me to document the weekend.

That night we met some friends at Hudson Grille, right across the street from the CNN Center. Considering one of the entrees was named after John Smoltz, I assumed former Auburn Tiger and former Atlanta Brave Tim Hudson had opened the establishment.

Following our meal, we traversed a few miles to take a very old, and very small part in the Buckhead Bar Bash that I had told you about many times over the last few weeks. It was a nice, young, crazy-busy convergence of Auburn fans and Louisville fans, but us olds ended up finding the quietest place to sit and chat before it was off to bed.

The next morning we woke up bright and early to head over to Fan Day to take in the sights. After giving away a few complimentary tickets to some unsuspecting fans (thanks to AT&T), our first stop was in the presence the neck of Takeo Spikes.

As part of the AT&T booth, Takeo (and Deion Branch) signed autographs for Auburn and Louisville fans alike, but once he was done, he ran over and shot this stop-motion video. I tried my best to do one of these, but I’m not that smart.

https://instagram.com/p/7QaxHpJJgk/
After Takeo was done posing for about 50 different pictures as part of this video, I got to sit down with him for a few minutes to talk football. He said he wanted to see more consistency from the Auburn defense, he said he wanted to see if Gus was going to change things up so that defenses would never catch up with him, and he was concerned that Deion Branch (who was delivering the game ball with Takeo) would tinker the air pressure due to his association with the New England Patriots.

Just “chopped it up” with @takeospikes51. He told me the secret of the neck girth. #ATTKickoff #ad #auburn pic.twitter.com/2MankNScbk

Once Takeo let me go, I was put on the front row of Tiger Walk where I apparently hit Jeremy Johnson’s throwing arm just a little too hard, so I quickly jetted outside to get in a little tailgating. We headed over to the ATL Kickoff Tailgate that I also told you all about over the last few weeks. But on the way, I was able to give away two club level tickets to some unsuspecting Auburn fans, compliments of AT&T.

Thanks @WarBlogle for giving my friends two tickets to the game today! #WarEagle pic.twitter.com/LSWcMDcpxz

After a little ‘gating, we snuck onto the field. No, really, with the help of AT&T we were able to circle the field during pregame and get a look at Louisville’s “uniforms” and Auburn’s orange-ness. That was a lot of orange.

Following the win, we took to downtown Atlanta for dinner at Legal Seafood. I’m not sure why they had to tell us that it was legal, but it was good. We then went back to the Omni and crashed so that we could get up and go to the final stop on the Blogles tour of Atlanta.

Sunday morning, we bowed at the Church of the Faux Sea and were given the opportunity to tour the Georgia Aquarium (again, thanks to AT&T). This included watching the feeding of whale sharks (I named one of them Carl Lawson), a look behind the scenes of the everyday aquarium duties, and concluded with a dolphin show that made me tear up.

All in all, the trip to Atlanta was awesome, partly due to the Auburn win, but mostly due to the new phone, the access, and the swag I got from AT&T for being able to share my trip with you.