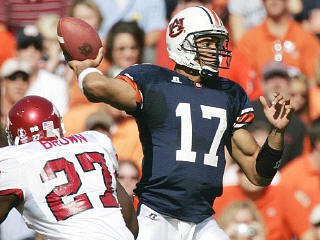 How I Remember It: This one was on a bright Saturday afternoon, on CBS, which meant long, hot, boring commercial breaks to stand through. Auburn ran a flea-flicker that started with Campbell pitching to Cadillac, who flipped it to Courtney Taylor on a reverse, who then flipped it back to Campbell, who underthrew a wide-open Devin Aromashodu, who turned around to make the catch and outrun two Arkansas defenders for the touchdown.

I remember the Tigers building up a huge lead in the first half, but missing the first PAT in a ton of attempts. I also remember Matt Jones being held in check for most of the game, but helping the Razorback score a few more points than they should have to make the game seem closer than it was.

This was a good win over the always-pesky Razorbacks and one of the only times that I can remember Auburn beating Arkansas in convincing fashion.

What Really Happened: Auburn scored on each of their first five possessions, one of which was the flea-flicker described above, and yes, one ended in a missed PAT by John Vaughn, ending Auburn’s SEC record of 209 straight.

Matt Jones kept the game interesting with a few touchdown passes, but was held to 54 yards rushing, which all came on one play. At the time, this was the most points scored on Auburn all season, but Auburn’s offense did above and beyond what it needed to do to win the game.

Why did I pick this game? Given Auburn’s history with Arkansas, this game was a nice breath of fresh air. The atmosphere was great for this game as Auburn played around with trick plays and built up the early lead to easily beat the Razorbacks. This game was just a nice, fun, easy win for the Tigers which easily put it in the Top 30.

Play of the Game: Auburn’s successful flea-flicker for touchdown showed that Auburn was good enough to play around and beat a team that had always given them fits.

Quote of the Game: “That was a play everyone’s been talking about all week. Everyone on the team wanted to run it. It hardly ever works in practice.” – Jason Campbell