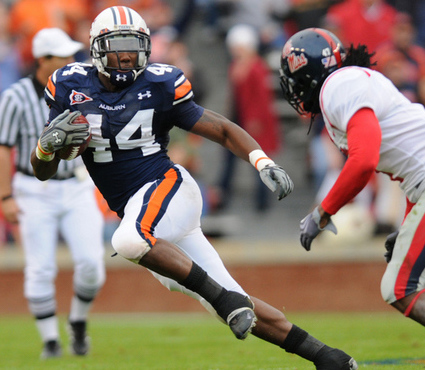 How I Remember It: I went to this game alone because of the dreary weather and the bleak outlook on the rest of the season after three straight losses, but it actually turned out to be one of the best games of 2009.

As we all remember, this game was nicknamed “Navy Nightmare” because it was played on Halloween. The fans were asked to wear blue instead of the recently customary orange to give the stadium a dark, spooky atmosphere. The funny thing about it was that the game kicked off at 11:30 AM. I’m sure it was very, very spooky for the Rebel fans and players to come into the super scary and dark stadium with the high noon sun shining.

The idea sort of worked, though, because Auburn played one of its best games all season. Walt McFadden had one of the coolest interceptions I had ever seen, as the ball was tipped up in the air by a falling Rebel receiver, caught by Walt, and returned for a touchdown. Auburn scored 20-something points in the 3rd quarter alone, but Ole Miss also had back to back, untouched, 75+ yard runs to keep the game semi-close. I believe on one of them, Auburn blocked the PAT and ran it all the way back for two points. All I really remember is seeing guys running all the way down the field on what seemed like two or three plays in a row.

What Really Happened: Auburn had lost three straight games (Arkansas, Kentucky(!), LSU), and was looking to salvage the season against the trendy pick of the year, Ole Miss. The Rebels were ranked 25th in the nation, and had two losses on the season.

The two teams then combined for 36 points in the 3rd quarter alone. Auburn scored on their first possession with a pass from Kodi Burns to Tommy Trott. A few minutes later, Walt McFadden scored on the interception I remembered earlier. To further the greatness, Ben Tate then scored on a 58-yard run around left end.

Then some craziness happened. With Auburn now up 33-7, Ole Miss returned the following kickoff for a touchdown. After Auburn went 4-and-out, Ole Miss’s Dexter McCluster, ran for a 79-yard touchdown on the first play of the drive. Not to be outdone, Auburn then blocked the PAT, and Demond Washington ran it back 98 yards for 2 points.

The 4th quarter went scoreless as Auburn won it’s 6th game of the season. The offense was responsible for lots of points, and besides the opening drive, and the two long runs, Auburn’s defense held Ole Miss in check, and definitely played their best game of the season.

I can’t talk about this game without mentioning the neck injury that Zac Etheridge sustained in the first quarter. Etheridge was carted off the field and missed the rest of the season, but did play out the rest of his career the following season.

Fun Fact: This game dropped Ole Miss to 9-25 against Auburn.

Why did I pick this game? It was an extremely fun game to watch because Auburn was reeling, Ole Miss was the media darling, and the Tigers pretty much manhandled the Rebels. The pre-noon kickoff could have killed the atmosphere, but I remember this being one of the louder and pumped crowds of 2009.

Play of the Game: Walt McFadden’s interception returned for touchdown in the 3rd quarter put Auburn up by 20 and set the tone for the rest of the game.

Player of the Game: Walt McFadden had three interceptions in the game including the one returned for a touchdown.

Quote of the Game: “I went through every emotion, high and low, you can go through in 15 minutes. It seemed like 15 days. It was pretty incredible.” – Gene Chizik referring to the 36-point 3rd quarter.

Kind of a weird poem posted before the game: Auburn Family