Since Father’s Day is this weekend, I thought it would a good idea for us all to share some Auburn-related memories that involved our dads. One of my memories I don’t even actually remember at all (so it’s not really a memory is it?). 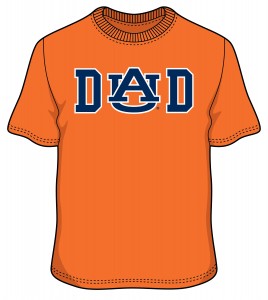 Other than the walk to Legion Field on that November 29th, in the year of our Tillman, 1986, I had no idea what went on that day. That was until my dad told me years later that my 4-year old self spent most of the game asleep in his lap. Evan as Lawyer mistakenly took that reverse around left end to score the winning touchdown against Alabama, I was still just a’dozing. I have tons more like this, but I want to hear about yours.

Send me your stories about your dad, or any fatherly influence, but make sure they have an Auburn twist. Otherwise, I don’t care. I’ll choose the best few and post them Sunday or Monday of next week. If you want to include pictures, just email them to me after you’ve sent in your story.

Oh, and I love comments, but if you want your story to be considered for the “best of” post (I know you’re all hoping for a spot), fill out the form. Don’t put it in comments. Thanks in advance.

4 Things Cheerleaders Should Never Do At Basketball Games

I will never forget as I finished packing up my stuff to load into my car before heading to move in for my freshman year at Auburn, I walked downstairs to see my dad head to toe in Auburn gear (and for a special embarrassing touch he was wearing tall socks with sandals). He had even hung our Auburn flag on my car. He was so excited about his baby girl going to Auburn. It was seriously embarrassing, but that’s my Dad…and I wouldn’t change a thing about him.

My dad was a cheerleader at Auburn in the late 70’s. The first Auburn game I remember attending, they had a reunion and recognized the cheerleader alumni on the field. My dad brought me onto the field on his shoulders, and I got to stand with him on the sidelines and meet Aubie. I have a picture of it here: http://imgur.com/FxQrE

My father, John Sharp, Class of 1949/Forestry, won the Forestry Dept. beard growing contest while he was at Auburn. (I have emailed a photo to you.). He was a very serious man or so I always thought! On the back of the photo in his choppy handwriting, he wrote “Drunk out of our minds”! Also, he could wear his Auburn belt from his college days to the day he died! My daughter, Casey Page, Class of 2009, has it now! My father always said that Auburn gave him something that no one could take away – his diploma! War Damn Eagle, daddy!

My Dad is not an Auburn grad. My Grand parents lived there. Everytime we went to see them, Dad would take the long way, so we could ride by the Stadium. I was in awe of it’s size even then. Dr. Gross from our home town would give him tickets to games. I saw Pat and Terry play one day. It was AUsome. I was hooked forever.