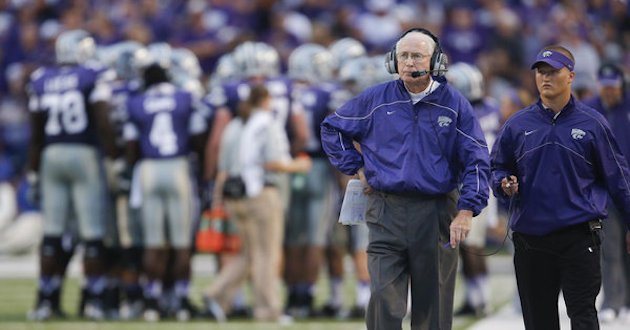 Jon Morse is the managing editor at Bring on the Cats, the Kansas State team site at SB Nation. A recovering information technologist, Jon also has a weird preoccupation with small-college football, born of being raised in an area overflowing with NAIA and Division II programs. He can be reached on Twitter at @jonfmorse.

1. What is a Kansas State fan’s first thoughts of Auburn football?

Probably Cam Newton. Interestingly, K-State was in on both Newton and Nick Marshall when they were coming out of junior college, and lost out on both to Auburn. Oh, well.

2. Do Kansas State fans love Bill Snyder because he’s not Ron Prince, or what?

I think it probably has a lot more to do with the fact that he’s not any of the guys that preceded him. It is not an exaggeration to say that Bill Snyder saved K-State athletics as a whole. Even with a basketball program which, at the time he was hired, had been to more NCAA tournaments than all but five schools, K-State was THIS close to getting thrown out of the Big 8.

He salvaged football, saved the school’s standing as a major college athletic program, and is indirectly responsible for literally hundreds of millions of dollars in actual academic investment as well. In short: Ron Who?

Every Man a Wildcat, although there are some who’d really like to have the slogan changed to EPAW.

4. Besides the quarterback, who are two Wildcats that Auburn fans should be worried about?

Well, there’s one guy you may have heard of by the name of Tyler Lockett. In this clip, that corner that got juked out of his shoes? Jason Verrett, who got drafted in the first round this year. Lockett is the son of former Wildcat and Chief Kevin Lockett, and nephew of former Wildcat and Charger Aaron Lockett. We have a minor industry going there.

You should also be familiar with Ryan Mueller, last year’s Big 12 Defensive Lineman of the Year. He somehow earned that honor despite losing out on Defensive Player of the Year honors to another defensive lineman, Jackson Jeffcoat of Texas. Mueller is a former walk-on who’s still busy trying to prove everyone wrong, even though 11.5 sacks last year probably already accomplished that. Auburn may not feel the need to double-team Mueller, but that’s the only way anyone’s stopped him since he entered the starting lineup. He is, to put it lightly, a disrupting factor.

5. Where do you see Auburn having a distinct advantage over Kansas State?

I don’t think it’s a stretch to say that Auburn’s probably got the edge here in pure athleticism. Not to say that K-State doesn’t have athletes, but both by fate and design Manhattan is not a place where guys with five-star measurables tend to land. That said, being specific I’d have to suggest that Auburn has a specific advantage at running back, and the Wildcat run defense is perhaps a bit questionable.

6. Where do you see Kansas State having a distinct advantage over Auburn?

I say this with no disrespect to Gus Malzahn, who is an excellent coach and someone I’ve been familiar with since before he joined Houston Nutt’s staff at Arkansas: coaching. It’s no secret that the key to K-State’s success is that guy in the windbreaker.

I mentioned that the lack of five-star talent in Manhattan is partially by design, and that’s because Bill Snyder goes out and finds kids who can execute his gameplan with precision. Every year, some team that’s faster, stronger, more physically gifted walks away wondering how they lost to a bunch of guys nobody else even recruited.

7. What can Auburn fans making the trip to Manhattan expect?

Lots of noise. Bill Snyder Family Stadium is not a 100,000 seat palace. But the seats will be full and the stadium acoustics actually make it sound a lot larger than you’d think. Visitors are treated pretty well; the fanbase really brings it during the game, but that’s where it ends. Y’all will have a good time… at the very least until kickoff.

8. Who are are you two favorite Auburn Tigers of all time and why?

Bo Jackson. It doesn’t hurt that I’m a Royals fan, does it?
Phillip Lutzenkirchen, because he was just an awesome dude. Tragic loss.

9. What is your score prediction/analysis of the game?

There are just so many things we’re unsure about here. Obviously, the performance against Iowa State is troubling, but that was a road game in a place where strange things happen to everyone against a team which brought its A-game. Even then, it was really only one 15-minute stretch that was problematic, but hey, 15 bad minutes against teams like Auburn and Oregon is how you lose by 20.

On the other hand, even Auburn’s own coaching staff says publicly that Jake Waters and Nick Marshall are basically interchangeable, and that either would excel in the other’s system. That’s a bit of a confidence-builder for K-State fans, because obviously Marshall’s the guy we’re most worried about.

Ultimately, it’s going to come down to whether K-State can control the clock and get some stops. Auburn’s defense isn’t causing anyone to tremble in fear, and this is one of the best offenses Bill Snyder’s ever assembled, so the Cats are going to score. I’m looking at a bit of a shootout here, and while I’m not sure K-State can manage to win, something in the neighborhood of 41-38 doesn’t seem at all out of the question.

10. Where do you see Auburn and Kansas State ending up this season?

I see two paths for Auburn. Either they’re going to win the West, or they’re going to have disappointment and end up 9-4. It’s all going to depend on whether they can flat outscore everyone in the SEC, because that defense can’t bail the Tigers out if they run into an opposing defense that can contain Marshall.

As for K-State… it’s funny, but in terms of the end result of this season, Thursday night almost doesn’t matter so long as the game is competitive. A win would inject K-State into playoff talk, but it still doesn’t matter if K-State can’t get past Oklahoma and Baylor. A competitive loss, on the other hand, doesn’t necessarily eliminate the Wildcats… because 11-1 with a close loss to Auburn might actually do the trick. That’s overshooting expectations, though; K-State probably ends up in the Alamo.

11. Lastly, where did the rest of your mascot’s costume go? Lost in the cleaners?

Hey, we’ve got a pretty serious veterinary sciences department at K-State. Willie is the result of some, shall we say, ground-breaking experimentation. And that’s all we’re able to reveal on that topic.

The ‘Blogler and Baby Blogle Knock Out Knoxville

Has It Really Only Been Two Years?

I was also wondering about the K-State mascot not having a complete costume. Thanks for asking the important questions!!!

Now about Football, I really like these articles because they give us a glimpse of what the other side feels about Auburn that is authentic…not some trumped up crap from talking heads who know nothing about either program.

Good stuff, Blogle and Jon. Always love these, and this one was particularly strong.

Great stuff. This guy is authentic and I respect his opinion. His team is the real deal. We will have to play great to beat them. I appreciate the love for Bo and especially for Lutzie. He’s welcome in the Plains any time, imho.

I just had to drop by and thank you for that comment. It means a lot to me, because “authentic” is one of the highest compliments I think I’ve ever received.

Good game Thursday night, folks. We should’ve had you, but don’t think I’m diminishing Auburn by saying that, or suggesting it was an undeserved win. I’m a firm believer in the maxim that lucky breaks are part of BEING a great team, and that virtually every mistake by a team is at least partially caused by the opponent’s actions. (Example: Lockett’s richochet. That wasn’t on fourth down; if Jonathan Jones doesn’t catch it, K-State’s still got a chance to score, and Jones catching it wasn’t luck. Might have been lucky to have the opportunity, but he still had to grab it.)

I watched it again last night and noticed several things that are not getting much mention. 1) The wind factor. That stadium is open and does not protect against gusts. This may have had an effect on AU passing game which along with the electric atmosphere was just enough to throw off the receivers for AU at times when they usually catch the ball. KSU pass attack seemed to be dealing with this much better than AU. We spend a lot of practice time in an indoor facility with no wind. On the other hand, it was definitely affecting the kicking game and the poor KSU kicker just got mental. At 17-7, we were driving the ball in for what seemed a certain TD but instead ran a series of strange plays with our backup quarterback lining up at receiver that foiled our momentum. We settled for field goal when a TD would have iced the game at 24-7 for a three score margin. Not sure what CGM and Lashlee were thinking but now have to be rethinking.

Coaching is what he thinks they have an advantage over? Snyder is a good coach, but K-State fans love him only bc he takes a mediocre program and it goes 8-5 every year. That’s not all that impressive. In a span of 4 season, Gus has led (who are we kidding, Chiz wasn’t the brains) two programs to 3 conference titles. One of those programs did that twice in the toughest conference in America. Yeah getting to the Orange Bowl and getting blown out by Oregon is a solid job. But I don’t think Snyder is the better coach