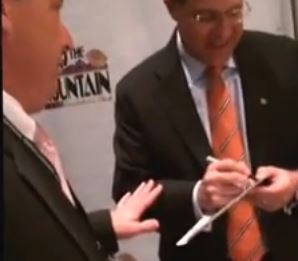 Gus Malzahn received the Bobby Bowden Award from the Over the Mountain Touchdown Club in Birmingham a little over a week ago. During an autograph session at the event, Malzahn was approached by an Ohio State that told him there was no need for thanks to the Buckeyes (because Auburn’s path to the BCS title game, which should have been opened anyway, was made completely clear by Ohio State’s loss to Michigan State in the Big 10 Title game).

Malzahn then turned it around on him and said he did thank Mark Dantonio of Michigan State for helping out, to which the Ohio State fan slumped and walked off. Here was the short exchange:

UL-Monroe Review: Exactly What Was Needed

Thanks for the post from the Bobby Bowden National Collegiate Coach of the Year Award – https://twitter.com/otm_tdclub/status/443500806902280192