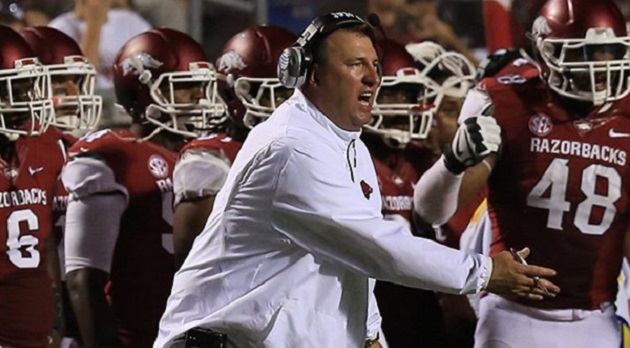 Flint Harris (@Flint_HolyTurf) is an Arkansas graduate that runs and writes for HolyTurf.com, a site all about the passion of college football, specifically the SEC and Big 12. Flint has been a staple of the Arkansas-themed Other Sidelines, and he’s never given me a reason to not invite him back. Flint’s a good guy. He’s just a hawg…

Man, those guys are pretty good. That Malzahn guy is using a former Georgia DB at QB and has them ranked 11th in the country. Hmm…

2. Are you still a Bielemer and why?

I am wavering. This team has no talent, so it is hard to tell too much right now. I don’t love the way some of the earlier, more winnable games were managed.

3. Are Arkansas fans still behind Bielema or are the pitchforks and torches getting fired up?

Bielema is definitely getting a pass in 2013, and rightfully so. The last several recruiting classes were Sun Belt worthy. He does need to be more competitive down the stretch than the last two games. Opponents are currently on a 104-0 run.

4. If you had your choice for head coach, would you take Bielema, Petrino, or Malzahn? What about the rest of the fanbase?

Seems pretty clear now that Malzahn is a mighty fine head football coach. The turnaround in Auburn is impressive. That being said the 2012 Auburn teams beats 2013 Arkansas by two scores on talent alone, so Gus had some talent to work with, but 11th in the country is eye catching. Arkansas fans are probably still divided on Malzahn, but it becomes more evident each and every day that Malzahn is on his way to being an elite SEC head coach. Sure looks like we missed the boat on that one.

5. Name two current Auburn Tigers that scare you and why.

Yes! Oh, Tre Mason still scares me. Rhett Lashlee could certainly put the hammer down on his alma mater this week. The entire defensive line seems to make a lot of plays. I know Dee Ford has better stats, but I like watching Gabe Wright and Carl Lawson. They could frustrate the Arkansas offensive linemen.

Most fans have probably heard of freshman running back Alex Collins by now. He has 797 rushing yards and four touchdowns. Collins runs well between the tackles. The only real knock on him is he lacks breakaway speed. The DE duo of Chris Smith and Trey Flowers is underrated. They are third and fourth in the SEC in tackles for loss.

7. What’s a position where Arkansas will have a decided advantage?

Kicker! Zach Hocker is awesome. He has range beyond 50 yards and his only miss all year was a block by Alabama.

8. What’s your early score prediction for this year’s game?

Auburn will win. Arkansas will play better at home than it has on the road, but Auburn wins 41-21.

9. Where do you see Auburn and Arkansas ending up this season?

Arkansas will not win a game the rest of the year. Sure looks like Auburn is headed to a New Year’s Day Bowl.

10. Have you ever deleted footage from tapes you’ve sent to Bielema?

I’d like to delete the 2013 Razorback season from my memory.

Will Auburn Have Last Names on their Jerseys in 2012?

I doubt 2012 Auburn beats this 2013 arky team! That 2012 Arky team had John L. Smith as their head coach and still beat the brakes off that Auburn team! I don’t think that 2012 Auburn team could have even beat Auburn High….. Well maybe Auburn high, but by one score. Boy am I glad Gus came back!!! LOL!!! WFE!!!

Let’s Go pretty much nails it. I feel badly for Flynt and his team but the bottom can be a great motivator. Like having your pants on fire.