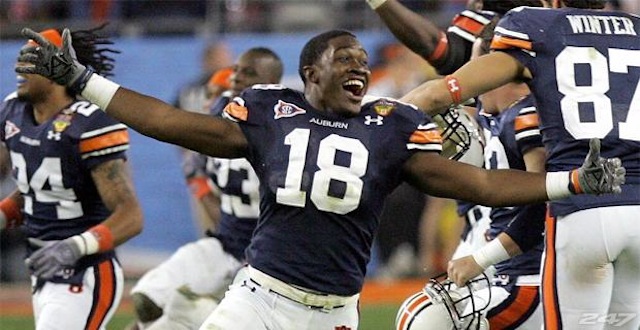 I’ve been attempting to do my own podcast for at least two seasons now, but for whatever reason it just hasn’t happened. Now that I’ve been a guest/host of the al.com Auburn Football Podcast for over a year now, I’ve got no reason to do my own. I mean, you can only take so much of @radiofreeblake and @MattScalici, right?

My initial idea for the War Blogle/WarBlogle.com/I don’t have a real name yet podcast, was to bring in a different guest each week. They would have some connection to Auburn, or at least have some good knowledge of Auburn. But that idea has sort of morphed into maybe, possibly, just doing weekly podcasts with the one-and-only Kodi Burns.

Kodi was nice enough to join me on my very first attempt at hosting a podcast, and time permitting will be on each week. If we’re lucky enough for that to happen, I think we’ll go with “Burns and Blogle.”

In this opening podcast, Kodi and I briefly discuss Michael Dyer, Kiehl Frazier’s move to safety and the parallels to Kodi’s career, and some of his favorite games (where I basically turned into Chris Farley). Have a listen below. We’ll get better. Or I’ll get better, I should say.

[audio:https://warblogle.com/audio/podcasts/BloglePodcast_8.27.13.mp3|titles=War Blogle Podcast #1: Kodi Burns Talks Dyer, Frazier, His Past, and His Future]
Download the podcast here (right-click to save).

You can subscribe to the podcast on iTunes, and will soon be able to listen to it as part of the new War Eagle Sports Radio, a huge Auburn podcast community that’s launching soon. More on that later.

Let me know how we did, what you’d like Kodi and I to discuss next week, and what you think the name of the podcast should be.

beAU Knows: Calm Down, You Idiots, Auburn is Fine

Love me some Kodi Burns!

Loved the podcast!!! Great questions and solid, insightful answers by Kodi. The AU faithful need a podcast like this and especially War Eagle Radio!!!! I live in SC now and it’s hard to find truly good coverage of AU football online. Mike. AU/ ’85-’87