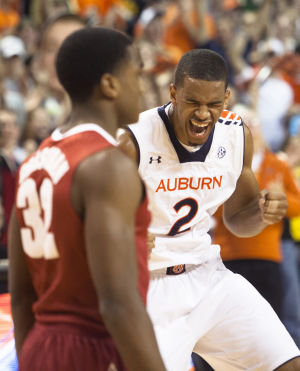 We did it, guys! We did it! After what was probably the worst half of basketball Auburn has played in a long time (and that’s saying A LOT), Alabama backed it up with an equally terrible performance in the 2nd half to allow Auburn to pull out the upset 49-37. I hate saying that, but it was an upset.

So here’s how it went: the girl who sang the national anthem, who was an Auburn grad with a great voice, messed up the words. She said “ramparts” in two consecutive lines. We should have known then that things weren’t going to go well. But she finished it out strong and got a good ovation. A complete representation of the night, actually.

Auburn missed 2,827 layups, putbacks, and other easy shots in the first half en route to only scoring 13 points. It took them seven minutes to score one point. Exactly seven minutes. I looked at the scoreboard as it went in — 13:00. They did all of that with 3/4 of the Malzahns sitting right under that basket.

The thing is that Alabama didn’t play much better in only scoring 23 points. If they had even a somewhat decent performance, they could have been up by 30 at the half. But they didn’t.

Then some guys dressed in gold suits, with gold masks came out and did some slo-mo pop-and-lock dance routine for the halftime entertainment. It really rejuvenated the crowd.

As the 2nd-half started, Alabama continued to play slow, while Auburn picked it up a bit. Then, in my true stalking fashion, I looked back at the Malzahns to see what they were up to. Mrs. Malzahn was gone, but she had been replaced by some dude in a Yankees hat and what looked like a Native American shawl. “Is that Cam Newton?” I asked @BeautifulBlogle. She thought it was. I told her to take a picture with her iPhone and zoom in. Her iPhone 4S camera apparently wasn’t good enough. My iPhone 5 was dead because I tweet too much.

As we kept staring, we decided it was him, but wondered why nobody was making a big deal. Then we saw a girl or two go get their picture with him. Then the students sitting behind him slowly started to notice and freak out. Then they showed him on the big screen, which got a big ovation. He put his finger up to his mouth and told the crowd to hush.

It was too late, the crowd was excited and the basketball team apparently fed off of it. A ten point lead got down to three, then Cam did one of the best things I’ve ever seen him do, and yes, I’m even considering the 2010 Iron Bowl. He got up from his baseline seat next to the head football coach, and walked over to the Jungle, the student section.

Aubie handed him a cheerleader’s megaphone, and Cam turned into what he currently is: a student. He led cheers, he genuinely yelled when Auburn scored, he took part in “OOOOOOOOOOOOO”-ing when Alabama had the ball. It was awesome. 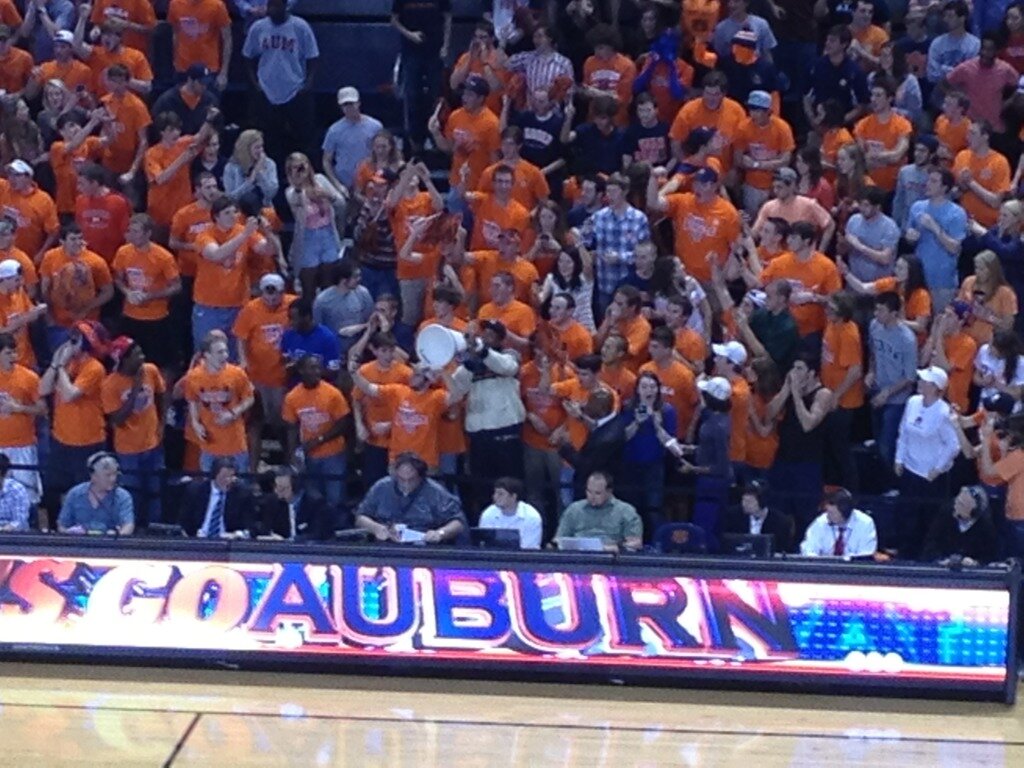 He would later come out on the court as the celebrity letter in the spelling out of AUBURN. It was funny to see him be somewhat shy as he did it. But afterwards, as the band was playing Tiger Rag, he ran over to the student section and lead the crowd in a “War Eagle”, or “Waarrrr eaGULLLLL” as he says it. 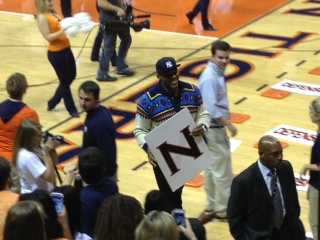 But I don’t want to say last night’s win had nothing to do with the basketball team. Sure, they have been frustratingly bad for the past month, and the first half was one of the most infuriating things I have ever seen, but they really stepped it up on defense in the 2nd half and shut Alabama down.

The Tide looked even more lost on offense than Auburn did in the 1st half. Once the Tigers realized that Alabama wasn’t scoring any points (they only scored 8 or so points in the entire 2nd half until the last minute), Auburn’s shots started falling. They looked like a real basketball team.

A weight was lifted. Auburn beat Alabama in a major men’s sport, in a real SEC game, for the first time since May 15th, 2011. It’s somewhat sad, but the reign of tyranny is over. It’s a new day in Auburn.

So after the game, it was time to sing a little song back to Alabama.

It was time, the last time, for the original Toomer’s trees to be rolled following an Auburn win over Alabama. And they were. 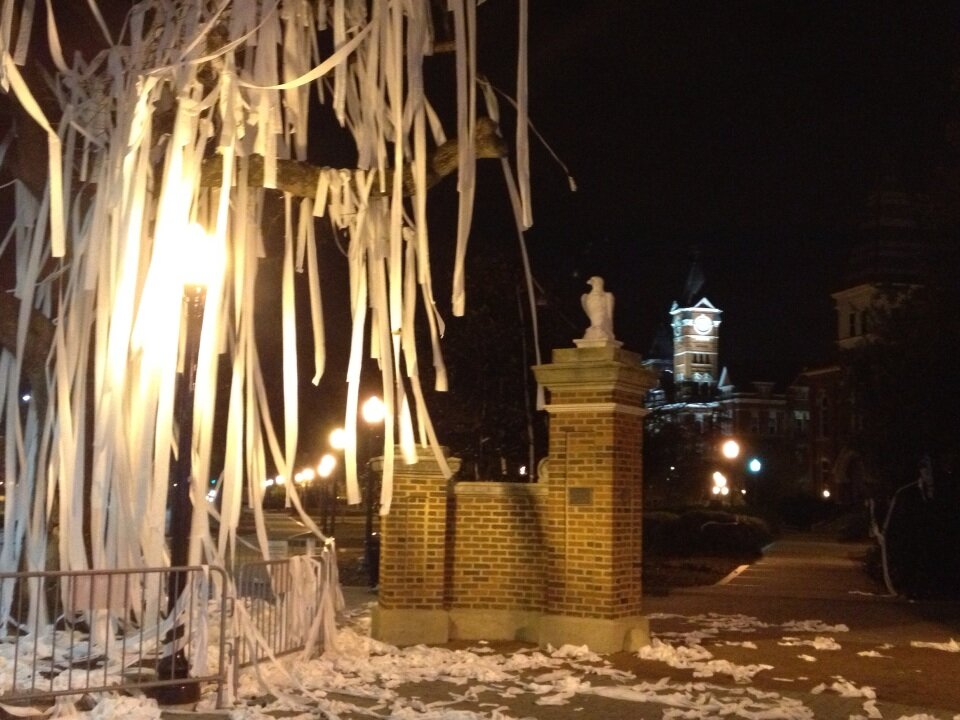 Here are the highlights. Don’t expect many from the 1st half.

I love it! I’m from Mobile so I couldn’t make it up for the game, but watching on ESPNU — especially in the second half — was amazing. The student section was fantastic — probably the loudest I’ve heard it in a while! And it’s SO great to beat Alabama (especially considering we should have beaten them at least once last year). War Eagle! Thanks for the post.

loving this article. My love of my life had me read it and begrudingly, as I was busy doing Mommy stuff, I felt so good….very heartwarming…gotta love the Auburn spirit….love to you Zach….our favorite person and student at this school. Well have a great evening and thanks warblogger.
Scooter Pickens County Pawn and Gun…tate ga

I was at the game and it was awesome to finally beat ala in a major sport again. Not to make too much of it but Cam really energized the crowd and I thought we made a real difference as the second half wound down! Loved getting to sing rammer jammer again! My last time was at the 2010 game in Tuscaloosa.