Auburn has absolutely nothing to lose this weekend as they take on the Georgia “We Got 10 Wins” Bulldogs. Sure, there’s the whole bragging rights thing and the risk of losing the lead in the series (Auburn currently leads 54-53-8), but everybody in the world has chalked this up to a win for the Dawgs. If the game plays out at all like the rest of the season, it should be a win for the Dawgs. That is why Auburn should go into the game with pride in Auburn, but play with an all out, wide open attitude. Why not?

Although it may not look it, Auburn easily has the talent to keep up with Georgia. They have three straight top-10 recruiting classes to show it. As we’ve said all year, the problem with Auburn has been mental, coaching, and flow. At this point, let the boys play. Let them use that talent and go out and play ball.

If recent reports are true, there’s no reason to really prepare for a similar situation next year. They would benefit most from just doing what they can to ruin Georgia’s chances to get to Atlanta this year, and let the future unfold as it may.

Jonathan Wallace opens up the offense. Last week, at least in the 2nd half, Auburn looked the most balanced they had all season. It was all because Wallace was able to complete a few passes to open up the run. Georgia will load up and dare Auburn to run, which could leave a few one-on-one matchups for Blake and Coates. If Wallace gets time to complete a forward pass or two, the inconsistent Georgia defense will be forced to back off. That will allow Mason and McCalebb to do what they did last week.

Offensive success all hinges on the offensive line giving Wallace a chance to throw the ball. If that doesn’t happen, we’ll see a bunch of sacks and stuffed runs by the time the game is over. Wallace hasn’t been sacked much, if at all, in his limited playing time, and he has the ability get outside of the pocket, but this can be a formidable defense he’ll be facing. Can be. They aren’t what we all thought they would be.

On the other side, Georgia runs what they have run forever. They are about as pro-style as you can get on offense. They also tend to take advantage of Murray’s arm and throw the deep ball a lot. Luckily, Auburn really hasn’t given up many deep balls this season. The one negative on the secondary on this season is that they don’t have any interceptions. But they have played better than any Auburn secondary has in years. I had almost forgotten what a pass break up looked like. 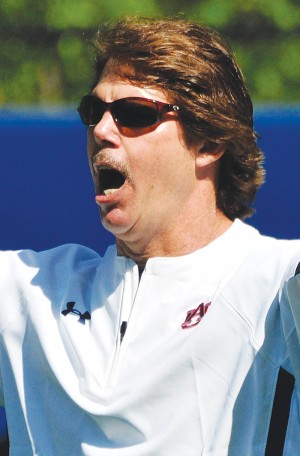 The issue Auburn may face with Georgia’s offense is the dink-and-dunk tight end passing game. For whatever reason, that always seems to be open. I don’t know why, but maybe Georgia won’t notice it.

If we could compare Georgia’s offense to another team Auburn has faced this season, it would be LSU. We all remember that under the cover of night, in Jordan-Hare Stadium, that offense did almost nothing. Sure, it was the night we realized that Mettenberger wasn’t exactly ready for SEC football, but that game showed that Brian VanGorder’s strength is stopping a pro-style offense.

Obviously Aaron Murray will be a little bit better than Mettenberger was, but as far as schemes go, Auburn can stop Georgia’s style. If they don’t just get absolutely whipped up front and allow their running game to get going, they could keep Georgia’s point total low.

That’s exactly what will happen. With the help of a crowd that should be much better than last week’s due to this being the Georgia game, the Auburn defense will stifle the Georgia offense. The Bulldogs will score on the first drive, as almost every team has, but will bog down for the rest of the game. Auburn will go into the half down 7-3, but Wallace will come out in the 2nd half, with an SEC half under his belt, and play all out.

The Auburn offense will exploit a suspect Georgia defense, and give Auburn that one game we will remember from this season. They have to have one. It can’t be this bad all year. This is the last chance. They have to make it happen, and they will.

BVG admits he is better at stopping the pro style versus the spread. I agree the analog for this game is the LSU matchup.

We have lost Lutzenkirchen but we gained a quarterback. This just might work.

Keep Prosch near Wallace at all times. We can’t afford to lose the new guy.

Do you live in Colorado and were smoking legal weed when you made this pick? Holy crap. I thought I was a homer, but at least I’ll pick against UGA every now and then. So how bad do you think Auburn will beat Bama?

Get rid of HeadJoke Chizwiz and hire Bobby Petrino now AU, why you have a chance! You wanted him when Tubbs wouldn’t bow to the BOT’s, need to go ahead and write that 7.5 mil check to Chiz, and tell him to use some of that cash to take care of Jay Jacobs as well. Petrino is by far the only proven big name qualified coach that would come to AU. He would take the talent AU has on Off and develop and mold a great team, and demand the same from his D Cord. Sign him to a 2-3 conditional contract. I don’t care about the “Jetgate” nor the Falcon’s fiasco, the volleyball girl scandal is bad, but we all make mistakes, we all deserve 2nd chances, how many of you out there have wore them out?? Look into the real scenario’s behind Petrino and you will see clearly he’s not the person the media has made him out to be. Read from people that was involded in the situations and what they have to say, not the media spin. Things happen for a reason, gotta believe that Ms. Volleyball girl fiasco has taught Petrino a big lesson, and that he has learned from it big time. That he would be a good coach to mold your kids/nephew etc. He has enjoyed success, but has also made mistakes and has had a chance to grow from them and be a better man. Sign him to a small contract, if he meets the goals laid out, He could very well be at “The Plains” for many, many years. If the President at AU doesn’t at least reach out to him and listen to him, unlike years ago, when they got on BL’s Jet and tried to undermine Tubbs. Karma is indeed a you know what. Look what JJ’s has done to AU’s sports programs, it’s completely embarrassing! 2 years from now under Petrino’s leadership, heading into his third yr, competing for a SEC West Title, no one but opposing teams fans would remember or even bring up the big 3 against Petrino. AU fans, please do yourself a favor and really, really take the time to really look into those 3 incidents and you will see things a little more clearly. He’s a proven offensive genius, very disciplined HC, with proven results. Look where his teams landed the year after he was gone, look at ARK this yr, think about where they would be if he was still there? He has made IMHO one really bad moral decision, that cost him dearly, chances are he wouldn’t dare make that mistake again, just the opposite, BP has probably been praying he could land on his feet at even a mediocore program, much less a place like AU, a place where he has worked and had great success, a place he would have success at again, quickly, running a clean, disciplined, tough program. A win win situation for all parties involved, and also a place where BP could retire at. Please AU fans please at least give him a chance, last thing AU needs is another “up and coming, fast paced head coach” , if AU does that, it may take another 50 yrs before AU competes for any kind of title!!!!