Back in 2010, Strange Brew Coffeehouse in Starkville, MS posted one of those very funny, and very original Cam Newton jokes on their marquee during the week of the Auburn game. I could have sworn that they put something up last year, but I can’t find it anywhere.

Either way, they are at it again. It appears, though, that without Cam they are struggling for material. It’s either that or a 1-11 record against Auburn in the last 12 years has their cockiness level found wanting. Still, though, it’s a shot fired, and it’s time to fire back. Come on, show your #StateHate. 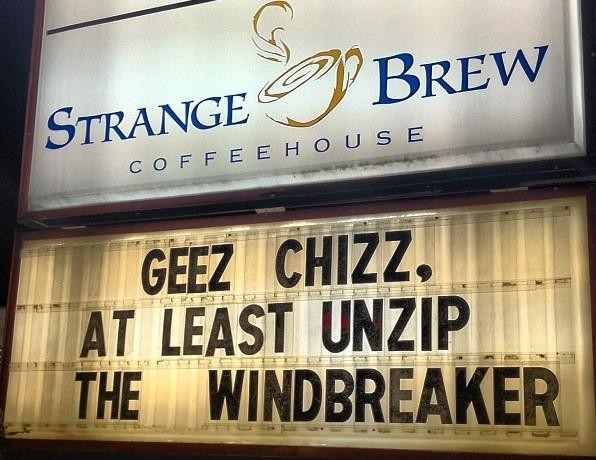 Update: the other side of the sign gives a major compliment to all gingers of the world. 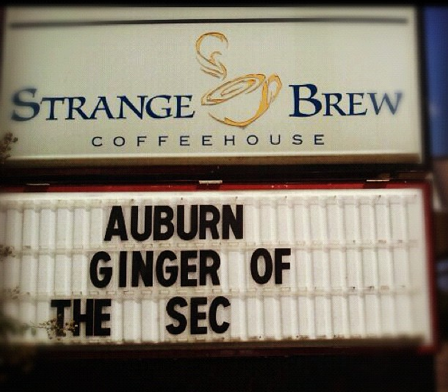 Pics thanks to friend of the Blogles, @sarahbeth425.

I’m beginning to hate them more and more. For a bunch that has no history they sure are mouthy. I would love to whip them by at least 10 and shut them up.

Totally concur with CHB. Funny though, the only school mentioned during the Newton scandal was MSU… and yet the NCAA never did anything. ? I wonder too what happened between Cecil Newton and the assistant coach. Anybody remember the man’s name? I wonder if that was the same one that resigned recently…. speaking of which… any updates on the NCAA investigation?

I’m sure if you asked “Which school was linked to offering money for the commitment of Cam Newton” at least 95% of the people would say Auburn.

And is “Chizz” instead of “Chiz” supposed to somehow be insulting? It just seems ignorant.

If all they can reach for is Chizik’s miniscule fashion preferences, then I feel pretty confident of MSU’s insecurity coming into this weekend.

And quite honestly, I’ve asked Coach about that before too.

STATE: Can’t even pay players to go there.