We’ve already discussed how the late Phil Neel’s Aubie was one bad tiger, and we know that Neel did program covers for other teams as well. Well, when he did covers for Clemson, he understandably used the same cartoon.

In this program cover from 1968, a home game for the Purple Tigers, the Clemson Tiger apparently knew that his team was going to lose their 8th straight to the good Tigers (21-10), so he decided to just end it all. It’s either that or the fact that Neel was an Auburn fan and he wanted to make the Clemson Tiger appear that he didn’t realize that an anti-Tiger missile would take him out, too. 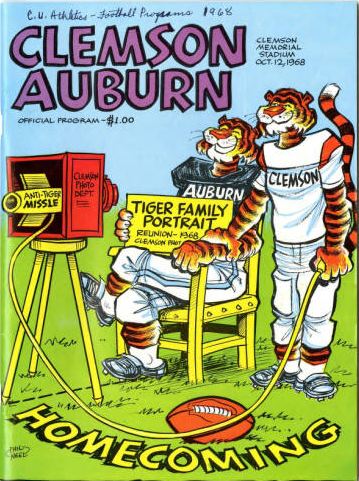