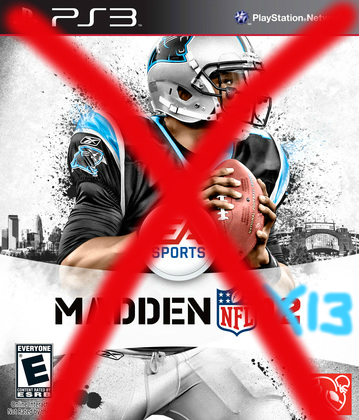 Cam Newton won’t be on the cover of Madden 2013, as was announced on ESPN’s SportsNation moments ago, when it is released on August 28th, 2012.

Now I know some of you out there are happy that Mr. Newton won’t be doomed to have his worst season ever, or God forbid, sustain a season-ending injury, but enough with that devil worship. There is no Madden Curse. It’s pure coincidence that a few guys had bad years after being on the cover. I mean, think about what you’re saying. You really think a guy’s picture on a video game means that the stars will align to cause him failure. Just stop.

Anyway, as I’ve said a thousand times now, if there was a curse, he could defeat it. What hasn’t he been able to conquer so far (well, besides a fan vote against a guy who went to Georgia Tech, which is a school known for cheating in fan votes)? Keep doubting him. He loves it.

So I guess I won’t be buying my first Madden game in eight years. That’s fine, I have enough coasters. Dads don’t get to play video games anyway. This does explain, though, why all the Bama fans were huddled up around the computers in Best Buy last night.