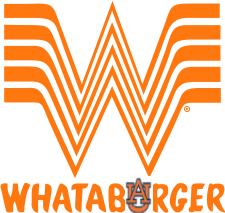 I know it sounds tragic, but is that not the most awesome headline you’ve ever read? And yes, it’s real. As the Northwest Florida Daily News reported yesterday, a man (no name was listed) was just minding his own business, standing in line waiting for his hamburger in an Okaloosa County (FL) Whataburger, when “two men each hit the victim near his left eye with a closed fist.”

Did I mention that he was yelling “War Eagle” at them, and did I mention that this occurred at 2:20 in the AM? We all know what’s going on or what’s been going on if you’re in a Whataburger in the wee hours of the Monday morning following Easter. Apparently, this patriot, this martyr, had taken advantage of the wine at the Easter services and just wanted to let everyone in the hamburger establishment know where his heart lies.

The report went on to say that after he was punched by two men, he returned the favor, which caused the two men to run off, leaving their hamburgers. Is their any doubt that the man who calls Auburn his team would able to scare off two men at once, and on top of that, make them leave their hamburgers in the dust? I say no.

To further show what kind of cowards we are dealing with, as they ran out of the building, one man hit a guy that was sitting on the hood of a car with a cheap shot. It turns out that man was the brother of the girl that was with our new favorite Auburn legend. Got that? Yes, again, this is real.

I know Auburn is in the process of the putting up statues for their Heisman winners, but maybe we can honor this guy in some way.

War Eagle to you, sir. War Eagle indeed! And I hope you enjoyed their hamburgers.

Update: How awesome is Twitter? About two minutes after originally posting this story, I had messages from two eye witnesses (both named Evan) of this event. It turns out that this “beating” actually occurred during Auburn’s spring break (which lines up perfectly with hamburgers at 2:20 AM), and not Easter like I previously assumed. That means this story is around a month old. The report just happened to come out yesterday.

It also turns out that our new favorite Auburn fan may not want to be our new favorite. The two Evans report that he was yelling “War Eagle” and being very obnoxious (I don’t see how that’s possible), when two men walked into the building. After they had had enough of the chanting, they told our guy to shutup, in a manner of speaking. Our guy then began to make comments about how their appearance could or could not have been likened to the characters on a certain TV show filmed in New Jersey.

He then called out their clothing choices from a store named after a flying bird that lives in our country. Apparently, he went straight from “War Eagle” to “American Eaaagggglllleeee.” It almost seems like it was meant to be. After these comments, our guy was attacked. Once the event was over, the two Evans apologized for our guy’s behavior.

So we already knew the guy was probably drunk, and he was technically beaten because he was initially yelling War Eagle, but maybe we shouldn’t put up any statues of him just yet.

Cam Does the Top Ten on Letterman

Who would take it past the point of talking to literally inflicting damage to a living thing? Oh wait….bammers?

I can’t wait for Michael Bay to direct this movie.

And hot chicks in bikinis.

LOTS of chicks in bikinis.

I’d see this movie… As long as Cam makes a cameo as a customer in the Whataburger.

At least he didn’t get teabagged.

i really love to munch hamburgers because they are quite tasty.”