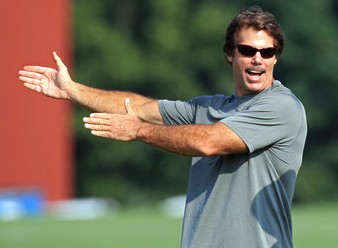 You may remember VanGorder from his time as the defensive coordinator at Georgia, which if you’re like me, is gonna take a minute to get over. I know I live in a dream world where college football is all about loyalty and business is nowhere to be seen, but just give me a day or so, and I’ll be okay.

This is a huge hire for Chizik and Auburn, and I know it. Just let me forget all those bad things I thought about when I saw him on the opposing sideline. He has been with the Falcons for the past few years, so I’ve grown to like him, so don’t expect this Muschampian transition to last long.

In an attempt to learn as much about VanGorder in as little time as possible, I took to Wikipedia and YouTube. There I learned that he is a native of Michigan and played linebacker at Wayne State.

This is how he’s spent his last decade:

There wasn’t much on YouTube other than this interview given by the Falcons linebackers, which is actually kind of informative:

Oh and there was also this, which is good if you’re a fan of an intense coach, but not good if you can read lips:

VanGorder’s defenses have always been very good, and he’s exactly what Auburn needs. I’m excited. I really am. But I’ll be more excited once I get this out of my head. Expect more level-headed thoughts to come once that’s happened.

His mustache has grown and he has seen the light since his days at thUGA. Hopefully we can get another great OC as well.

I hope the ppg takes an immediate turn for the better.

Let’s not forget another proment Georgia defection that we hold dear to our hearts.

Hard to tell here due to the black and white colors but that is Coach Dye wearing the silver and red.

I guess I could have spell checked…..

I bet he can throw a football over a mountain.

Imitation is the highest form of flattery. It is obvious that these players have a great deal of respect for the man as a professional. Here’s to him generating that type of respect at Auburn. War Eagle!