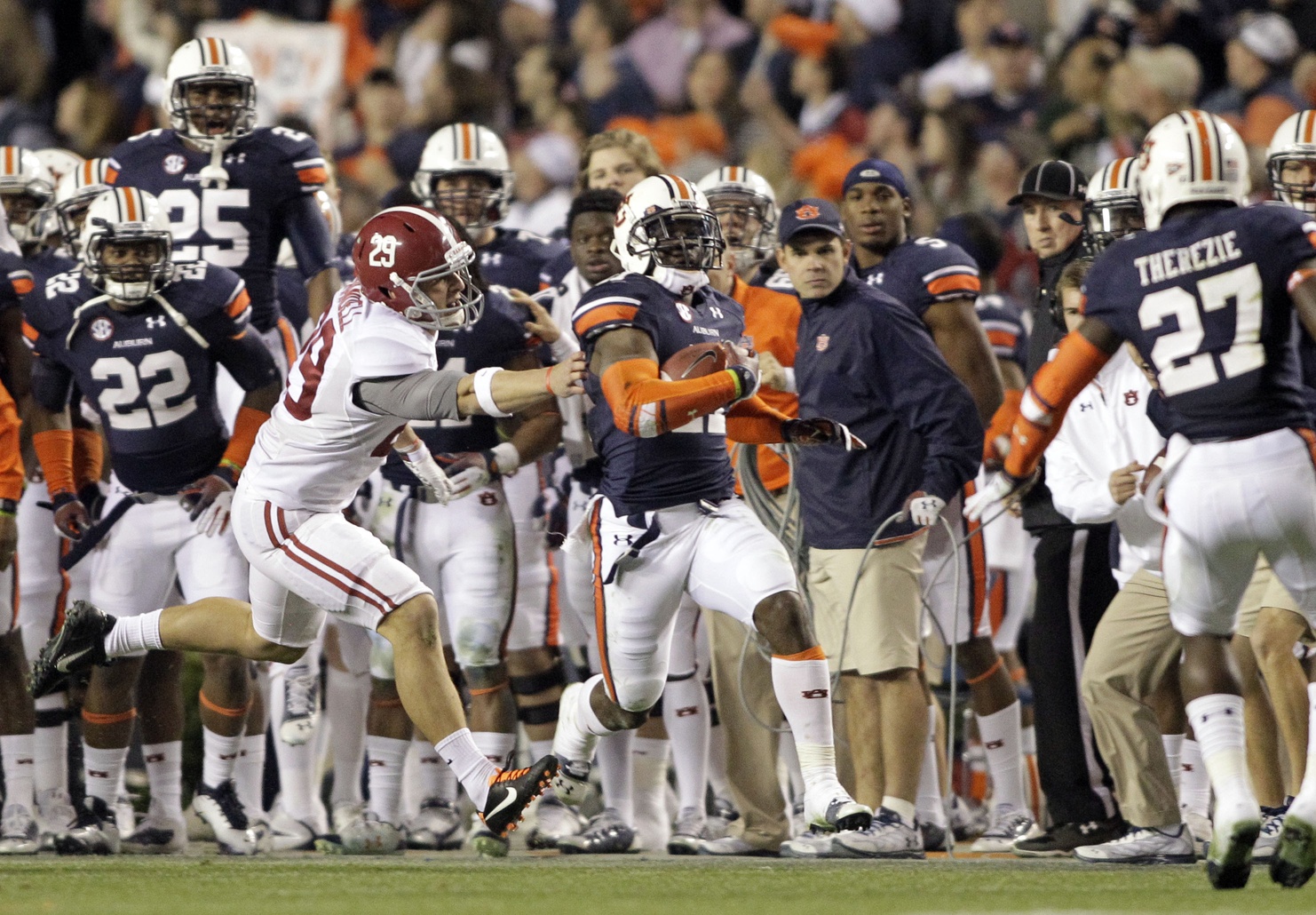 I don’t know why this was just uploaded to YouTube last week, a mere 521 days after Chris Davis broke the hearts of so many Crimson-clad Alabama fans, but it was and it’s awesome.

According to the video description (run through Google Translate), what we have here is “Narration of the last minutes by Juan Pablo Farill , Emilio Arturo Leon and Carlos for Latin American TV Alabama vs Auburn 2013 ended with one of the greatest dynasties in NCAA history with the historical return for TD Chris Davis after an attempt field goal by Crimson Tide.” Ok then.

The only thing it’s missing is “GOOOOOOOOAAAAAAAAALLLLLLLLLL….”

And thanks to @jrob1324, we now have the English translation of this commentary:

Ohhh there’s going to be a field goal attempt.

Let’s see if there will be redemption for Cade Foster or if they’re going to score on this long shot. I think the smartest thing to do would be for the kicker to go on the field, have time run out, and go to overtime.

Hey why not? Listen, it’s pretty simple… hey it’s not Foster! They’re sending Adam Griffith onto the field. He’s tried two field goals and had one that was successful. We’re talking about a 56 yard field goal.

Here you’ve got a risk, there’s a bunch of big players on Alabama’s team, and here they’ve got a kickoff returner in the endzone. If they kick it, and it doesn’t have the distance, it’s worth repeating that Auburn could get the ball and take it back and score a touchdown. We’ve seen it in the NFL.

Yes, because it’s easier to block, the offensive players get lost in the play.

Yeah, let’s see it again. They’re gonna take his scholarship away after that.
Yeah even the way he stands is uncomfortable. See how he approaches it, it’s very robotic, the form is very robotic, you might even say unnatural. That type of kick should flow, and Cade Foster seems very limited, so Griffith is gonna try it. He’s only had two attempts this season. One went through, and there he is with the most important kick of his career, this freshman player.

I’m saying, he, in another conference, in another situation, ruined his team’s season. Here, that person is Cade Foster, the villain of the movie.

Their season comes down to this.

The attempt at a field goal, looks good.

Here he is with the return, at the thirty yard line!

HE’S NOT WAITING FOR ANYBODY!

They asked for it… you reap what you sow!

What did I tell you!!

Heaven can wait for Nick Saban.

I told you, it was stupid. These big players, they don’t have lateral speed to make tackles.

It’s so easy to return.

Yes, it’s easy to return it, and what a way to finish a season in the SEC.

The last time that the number one team visited Jordan-Hare stadium, the students rushed the field, and that’s happening again now. Look at all this craziness in Auburn! We’re giving you a big party.

I told you it was going to happen! What can you say?

What a return! But, it was made much easier. Look at those excellent blocks, that block from the back, or, with the back, is extraordinary. A first class season. On behalf of the announcers here, we say thanks and goodnight.

That just made it better, didn’t it?

Highlights of Auburn’s 52-21 Loss to Alabama