Hey, I told you last week not to worry. Mailbags will be coming on any day of the week during the offseason. I know all three of you were worried. Alright, enough of that. Let’s get to it. 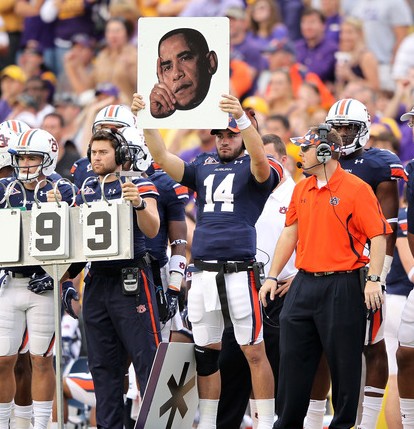 Taylor is putting out an APB on Barrett Trotter. Trotter….? Trotter….?

What happened to Barrett Trotter? They never showed him on the sidelines during Iron Bowl. Wasn’t even a mention of putting him in. Is there more below the surface?

He’s still there. He’s calling the plays in just like last year. They just don’t really have a reason to mention him anymore since, technically, he’s the third-string quarterback by now. Plus, with Auburn being beaten so badly in the last few games, there really wasn’t any reason to talk about Auburn’s unknown storylines from the sideline like they do when games are out of hand.

Instead, they were talking about Mark Richt and his hair that always seems to be windblown, and how the rematch of the century gave Verne ten more years to live. It’s kind of sad because Trotter has paid his dues, but that’s big boy football. Ask Neil Caudle.

Chris thinks the running backs will be strong next year, but he’s looking for more.

As long as all the running backs stay healthy through the bowl game till next season, Auburn should be very strong at that position. What is another position Auburn will be strongest at?

First off, you never end a sentence in a preposition, but #wareagleanyway. Seriously though, I believe the defensive line, with another year of experience, will be one of the stronger units on the team. Like most aspects of this year’s team, the talent is there, they just hadn’t played college football all that long.

If we look who’s going to be there next season, we’ll have Dee Ford returning as a senior, Nosa, Whitaker, and Lemonier as juniors, and even Ladarious Owens as sophomore.

The youngest group on the team will now all of a sudden look like a bunch of veterans. As long as Mike Pelton stays around whenever the new defensive coordinator is hired, this group can only get better and should be much improved.

What are some things you’d rather do than watch the REMATCH OF THE CENTURY TO END ALL WORLD HUNGER?

Well, you know, the typical: washing my hair, shining my shoes, walking the dog, but really… I honestly have zero desire to watch that game. Zero. It has nothing to do with who’s playing in regards to it being Alabama and LSU. I just don’t want to watch a game I’ve already seen. I despise the idea of any rematch so much that I will probably just sit around and eat Christmas candy or something.

All that being said, I’m sure I’ll watch every second of it since it will determine what my life will be like for the next year.

Casey has been told he was supposed to pull for Alabama in the National Championship Game. Let me clear that up right now…

Is there any reason we should root for Alabama in the 2nd game of the century? I’ve been thinking for weeks and can’t come up with one. I’ve heard plenty of people tell me why it’s good for the state, but I think they are all stupid. Am I being childish?

Absolutely not. They are our rival. We are supposed to want them to lose. They want us to lose and we should return the favor. It’s just football. You’re not wishing for them all to die. We’re just talking about wanting the football team that 99% of them have no real connection to other than it’s the name of the state they live in loses.

Forget the “it’s good for the state” crap. That means nothing. What’s good for 75% of the state is hell for 25% of the rest of the state. Don’t fall into their trap. That’s what they say until it’s back on them. Do you remember how many Alabama fans actually spent their hard earned food stamps on Oregon gear last year? People take that too seriously. Again, it’s just football.

I’m not saying root for LSU, because I won’t be. They will be a nameless, colorless opponent to the Alabama Crimson Tide and I will be pulling for them to win by 100.

“Forget the “it’s good for the state” crap. That means nothing. What’s good for 75% of the state is hell for 25% of the rest of the state. Don’t fall into their trap. That’s what they say until it’s back on them. Do you remember how many Alabama fans actually spent their hard earned food stamps on Oregon gear last year?”

Couldn’t have said it any better myself. Though, unlike the Blogle, I did grow up in Baton Rouge so I’ll be pulling Purple & Gold in BCS NC.

Wait! So will the second game overtake the first game as “Game of the Century”? I mean, how can we have two “Game(s) of Century” within a couple of months?

I am glad this year’s championship game features two SEC teams so I don’t have to listen to “support the SEC” nonsense. I pick and choose which teams I am loyal to in the SEC. UAT is not on the list. Not today, not yesterday, not ever. I would probably have said that last year, even before the poisoning of the trees and before seeing their fans wear Oregon gear, but now I say it passionately.

I, too, thankfully, have a history attached to LSU, so it doesn’t have to be a “nameless, colorless opponent.” Not that I am normally a fan of those other Tigers, but for them I’ll admit “loyal to the SEC” we’re all suppose to embrace.

I’m sorry, but after everything we, the Auburn Family, endured from EVERY fan base last year; I pull for no one except Auburn. If there were a way for both of them to lose, I’d vote for that. There was no “support Auburn, support Cam, support the SEC” for the NCG. It was all, “roll ducks roll” and “$cam Newton” (It makes my skin crawl to even write that…).

I mean, where did all this “camaraderie” come from? Talk to any other conference fan, they HATE every other school in their conference. Michigan-OSU? Miami-FSU? Stanford-USC? Hate. Each. Other. They wish bad things to happen to them (but not condoning that [in southern drawl] bless their hearts). We don’t need this any more. We can still be friendly to fans, as we should be and set an example, but still hope their team loses. They do the same to us.

Sure, you’ll run into a few fans here and there that are decent, heck I met a nice LSU couple in the Memphis airport this past weekend, but I don’t have to like their team and want them to win unless they are playing us. It’s no longer about “wanting them undefeated for Auburn”… Guess what? Have you seen the conference in recent years? Not an issue.

The only reason I plan on watching the “re-match” is two pronged: 1) what the blogger said, how will the next year of my life be dealing with bama fans (I do work in Alabama) 2) Because I work a screen printing company, I need to know which “if win” shirt to print and add the score to the design. That’s it.