I just can’t seem to get the Mailbag done at a decent hour on Tuesdays, so once again you’re getting the Tuesday Mailbag on a Wednesday. Sorry, I know it’s a bummer.

Will, a buddy from college, wants to know about my humble beginnings and few other things…

What’s with this humble stuff? But seriously, at some point in 2007, a guy from high school and I decided to do a blog. “WarBlogle.com” was the first thing that popped in my head and we went with it. After a few months of blogling together, like most bloggers, we got lazy and eventually just stopped. About a year later, I asked him if I could try it again on my own and he obliged. The rest is pretty much history. I actually think I still owe him seven bucks for the domain. 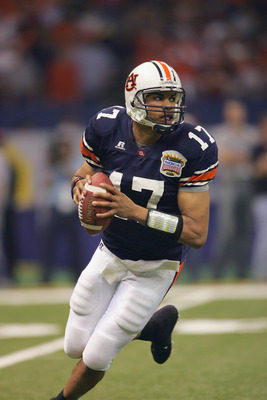 After many, many posts that were read by maybe one person apiece, I kept at it (because I’m very stubborn), and eventually, with the help of Twitter, the site has grown. It’s still nowhere near where I’d like it to be, but I’m definitely blessed that people do actually want to come here and read my stuff. Thanks for all of you that do so. You are the wind beneath my wings.

Secondly, who was your favorite player from ’00-’04, (our time at Auburn). Personally, I have to go with Jason Campbell.

I’m gonna go with J-Cam, too. Does anybody else actually call him that, or is it just me? He’s just a good guy and a good player. Very easy to pull for.

2001 Florida (23-20) for sure. It was one of the best Auburn games I’ve seen at Jordan-Hare. It was typical Auburn; beating the #1 team and pretty much dominating them along the way when nobody gave them a chance.

Jay wants to know about my jersey number preference…

If the ‘Blogler had his choice of wearing the number of one Auburn player, past or present, who would it be and why?

First off, I would never wear a jersey. It’s just not my thing. But if I did, I’d probably go with #7. I love single digit numbers and picking a Heisman trophy winner is never a bad idea. Plus, the one year I played middle school football, I was #7. I was the 15th string wide receiver, but I looked good. Doesn’t #7 just seem like a good number?

I do own a #35 jersey that I bought a few years ago, but it still has the tags on it.

Who is the better addition: Texas A&M, or the other, other Tigers?

Well, the more and more I think about it, the more I wish the SEC had stuck with 12 teams. I just don’t like the addition of teams so far away that are rarely, if ever, near the caliber of the conference. That’s not elitist, that’s realist.

But if I have to choose, the very obvious answer is Texas A&M. They do have tradition and some clout in football. However, Missouri is just a team that’s far away that adds nothing more than another market. As Joe the Average Fan, that means nothing to me. I see Missouri as another South Carolina. They may compete once every 7-8 years but will end up not being able to hang with the traditional powers of the SEC.

Do you think the SEC is actually expanding to improve athletics or is this purely for TV markets? Has Missouri ever done anything of value? Could A&M be any weirder? I’m still wrapping my head around the whole thing and you know what? I might just go to Canada with you. (Blogler’s note for those that don’t follow me on Twitter: when there were talks of Missouri moving to the SEC, in a whiny fit, I threatened to move up north… Alec Baldwin style.)

I think the SEC is expanding to add TV markets, which adds money, which could eventually improve athletics. The more exposure they get, they more elite players will want to come, which in turn would add better football. Better football means more advertising and ticket sales. Do I think adding Texas A&M and Missouri will do that? Well it adds two large markets, but the programs have a long way to go.

As far as Missouri adding value, I do think they add some in basketball, but that’s it. They have been competitive in football in the Big 12 for a few seasons, but have ZERO Big 12 championships. Like I said, adding the SEC to their resume will bring in better players, but it may take a while for them to move to the top of the league. They are better than a third of the current SEC teams, but is that enough reason to add them? In my opinion, no.

A&M is very weird. You’d think they’d just be some country, farming boys, but they are definitely not. The all-male cheerleading squad in white coveralls doing very, very weird cheers is very frightening to me.

As far as moving to Canada, I’m waiting until the first game to make sure it absolutely happens, but you’re welcome to join. I’m thinking Saskatchewan. It’s just fun to say.

Drew asks the much debated question about pulling for Alabama…

Is it wrong to root for Alabama when they’re not playing Auburn? Don’t get me wrong I’m not saying I like them, nor will I ever utter the words r*** t***, but I’m an SEC fan (secondary to being an AU fan of course) and I’d much rather see a BIG 10 school lose than an SEC school.

Well, I could easily answer this by asking “do you think they’d ever pull for Auburn?” The answer would be a resounding “no.” But do we really want to be like that? Sometimes.

Alabama is our rival, meaning that we don’t like them, meaning that when they lose, we should like that. If you say you root for them in every game except for when they play Auburn, you are missing the point. It doesn’t make you a bad person, or selfish, or jealous. It means you have a rival. It’s just sports. You’re not wishing death on anybody. You just don’t want the team that wants nothing more than to beat your brains out to win a game, regardless of who they are playing.

As far as pulling for them when they play outside the conference, I think that’s purely situational. If they are playing Ohio State or another “perennial power” it may be ok, but if they are playing LA-Monroe, you pull for those Warhawks like there is no tomorrow. I guess if it would be a major embarrassment to the conference you may pull for the other team to lose. But since they are our rival, you never pull for them to win.

If you would like to be included in future Mailbags that may or may not actually be posted on a Tuesday, send me an email.

1. You pull for bama to lose every conference game. Bonus points for Vandy, Kentucky, or Ole Miss. You pull for bama to lose to cupcakes (Unless Auburn is in the hunt for BCS/NC, then you need the SOS) You pull for Bama to win every bowl game, and every tough out of conference game. How fun is it that the bammers beat the best Big Ten team this year? How fun is it that the Big Ten went 0-5 on New Years day? As an alum living in Big Ten country, I can tell you it is really fun.

1(a) Slight caveat. If bama is making a run at it, you hope for them to win. For instance, if they had beaten LSU, I would have wanted them to win out. Beating an undefeated bama in the Iron Bowl and being able to look them in the eyes as you crush them is worth the soul shredding type of indignity it is to cheer for them to win a game or two more to make that happen.

2. In regards to conference alignment, I saw someone somewhere (Maybe even here) argue that the SEC should grab Clemson and change division names to Tigers and Prey. I like that. Lets grab a few more tigers and make that happen. Maybe then the stupid Tiger Bait chant wouldn’t even make me reflexively want to hurt someone.

3. As for choice of A&M or Mizzou, I have to disagree. Mizzou has a very highly regarded J-school. Since we have such a stupid system, publicity does matter. If more sportswriters watch the SEC trash their alma mater on a consistant basis, that only increases the positive coverage for conference teams.

“You are the wind beneath my wings.” – I teared up a little when I read this.

1 – Favorite players would be hard during that period as there were so many good ones. Personally I liked two Fullbacks Heath Evans and Brandon Johnson. Those were both great players. Heath even had one of my favorite plays of all time. I can’t remember the year but I remember him dragging several players and taking like eight guys to bring him down. I think it was in one of the SEC championship games.

I am very excited about adding TA&M. Mizzou not so much. I also think we got jipped. The west got tougher and the east got easier. Personally I would have loved to gone to the east and dominate it for several years.

On pulling for Bama see Updyke’s 1a above.

1 – Certainly agree with Stumble’s response of the East getting easier. How about some balance to the conference? Oh wait, I forgot that Bammer feels Rocky Top is somehow a bigger rivalry than Auburn. Haven’t seen any EPSN doc’s on that subject.

2 – Initially I thought that expansion would be a good thing if Auburn were to go East. Losing LSU & Ark wouldn’t break my heart and the renewed rivalries with UT & UF would’ve been fun. Now I’ve realized that by staying in the West and maintaining the 8 game conf schedule, we’ll play our rotating East opponent once every twelve years. TWELVE years! So now that Mizzou is here, the earliest we could play them is 2013 or latest being 2021. Doesn’t seem so great that we’ll renew our rivalry with UF around 2023.

And yes, Updyke’s #1 is good except I’d almost rather see B10 win out. Of course that depends on the team. And even then I might have to flip a coin or something.