The Mailbag is still going strong and has become one of my favorite things to do on the ‘Blogle. Keep the questions and comments coming in, and I promise I’ll get them in a post at some point. If you’d like to be a part of the Mailbag, send me an email.

The first email is from Jay Everett, a crazy fan that actually thinks Auburn can beat LSU. 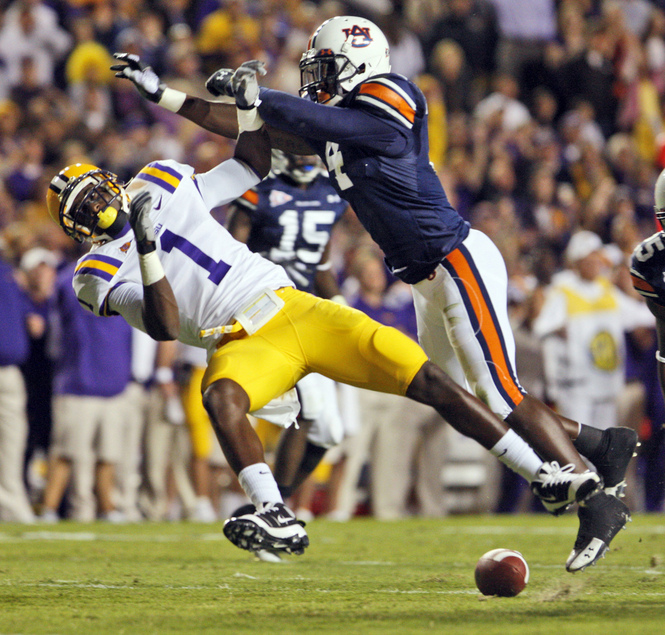 Tell you what’s cool about the LSU game, in talking to the players after the Florida game and hearing them talk, they are totally jacked about playing LSU! They want it! They actually believe they can beat ’em and you know what?? I believe they’re right! War Eagle!!!

Come on, Jay. Haven’t you heard? They have already named the Alabama-LSU game on November 5th the “National Championship of the History of the Entire Universe including Celestial Bodies that are Yet to be Discovered.” I’m surprised they’re still letting Auburn share the same field with LSU this weekend.

But seriously, as I tweeted yesterday, with LSU being picked to win by at least three touchdowns, it does actually give me a better feeling about Auburn’s chances this week. That’s just a ridiculous line, and usually doesn’t work in the favor of the favored. LSU has the type of offense that Auburn’s defense can stop (see: South Carolina). The only tough part will actually be scoring a point against LSU’s defense. Hopefully Steven Clark will continue to kick the ball deep and end up giving Auburn a shorter field to work with.

Is the game going to be tough? Absolutely. Should it already be chalked up as a loss? No way in Baton Rouge.

Paula Claunch writes in about one of my biggest pet peeves in all of sports.

Is it ever appropriate to leave a game early when Auburn is losing?

My answer to this question prior to 2001 would have been a resounding NO. My opinion changed in 2001. Having said that I have still never left a game early due to losing. But…listening to Rammer Jammer or whatever they call it so scarred me in ’01 that I have always thought leaving might have been a better option for me. Last year I attended the Iron Bowl in Tuscaloosa. I was there with my best friend and I’m ashamed to say that I leaned over to her midway through the second quarter and seriously said “if we leave now we can make the 7 pm showing of the latest Twilight movie.” It was not my finest hour. Egads, what if she had said yes?!

So here is my proposal: What about a grandfather clause for those of us who have been around forever? Perhaps we should be allowed to leave early if things go south in November because, ya know, we’ve seen things. But the people that just became fans should have to stay because ‘that which doesn’t kill us makes us stronger’ or whatever it is that ‘they’ say.

So, what say you? Do I get to leave early or must I stay until the bitter end?

Absolutely not. You should sit there and watch every one of their fans and players celebrate. That is why we like winning so much. We’ve seen and felt what the other half feels like. If you leave without getting the whole feeling of loss and depression, then winning doesn’t mean as much anymore.

Plus, what else do you have to do? I mean, weren’t you planning on the whole or most of the day being taken up by the game? The people who leave away games early really confuse me, too. You spent all that money and time getting there and you’re just going to leave the reason you did all of that before it ends? Have you ever left a movie with 15 minutes to go?

Double plus, what if the team just left early because they were losing? How would you feel if they did that?

After the first game this year, I wasn’t so sure about what Auburn’s record would like like by the time we played LSU. I’ve been very pleased so far (with the exception of the Clemson game) with the adjustments that Coach Chizik and his staff have made as the season progresses. What, if anything, do you see them trying to change for the game at Death Valley this week?

As far as the defense, I don’t see them changing anything unless they are hit with some injuries. The defense, especially the ends, are playing the best they have all season and seem to have found a working rotation. Let’s hope that continues.

On the offensive side, they are playing with the best they have. The injury to Jared Cooper shook things up, but Chad Slade has done good enough. The line will continue to get better as the season goes along and as the learn to play together. They just don’t have many more options as far as shifting people around.

As far as the quarterbacks go, that’s not my decision, but I’ll give my opinion on who should play. The guy who the coaches pick should play, and we should all pull for him.

Scott Daniel asks about the mystery of the ‘Blogler.

Most people that follow your blog & Twitter are aware of the running joke where you hide your face in pictures with your trademark WarBlogle logo. I’m sure that with all the crazies out there it’s good to maintain some sort of anonymity.  What about your co-workers that you often tweet about? Do they know that you are the WarBlogler? If not, how did you manage to keep them in the dark on your jaunt to LA for the ESPYs?

First off, I never meant for this to be a totally anonymous thing, but somehow over the past year, people started wondering who I really was and trying to find me at games and such. I think it’s hilarious, so I’m going with it. I have no problem meeting anyone who wants to shake hands. Just come to my tailgate on gamedays, and I’m readily available.

Do I do it for reasons of keeping the Updykes of the world from finding me? Not really. I don’t have any trees in my yard.

And as far as my coworkers go, almost all are Bama fans, and yes they all know I am The WarBlogler. They just don’t really seem to care. My boss, however, is an Auburn fan, and he gladly let me take off to go to the ESPYs.

Lastly, Peggy continues to try to find my true identity.

The world wants to know… are YOU John Galt?

Yes, you caught me. You caught the ‘tater.

I agree with the Jay Everett… I really think that Auburn has a real chance of beating LSwho this weekend!!! after that we take out the updykes!!!!!

Of course they have a “chance” to win. That’s why the games are played. However, the author of this blog has offered no logical reasoning behind his belief that auburn will in fact win.

Please make sure that Les runs to the correct side of the field this week.

Well I sorta did, see that part about the Auburn defense matching up well with the LSU offense. But I’ll give more detailed reasons on Friday. Come back then and feel free to flame!

“Hopefully Steven Clark will continue to kick the ball deep and end up giving Auburn a shorter field to work with.”
…Apparently you’ve never heard of Brad Wing…

I actually have heard of him. He’s the first college football player of all time to have a touchdown called back for taunting. Regardless of whether I’ve heard of him or not, it has nothing to do with the fact that Steven Clark has been pinning opponents deep each week of the season. The way a field position battle works is you have a punter pin the opponent inside their own 10-yard line. If that team doesn’t get a 1st-down, they will punt from their own end zone. I don’t care who the punter is, when they punt out of their own endzone, 99 times out of 100 the receiving team will start their next drive around that 50.

Could Wing do the same thing to Auburn? Yes he could. I never said he couldn’t. I just said that if Clark can continue to do what he’s done, then Auburn will have a shorter field.

Dang. I was afraid that was what your answer would be. Do you have a boss I an take it up with? Is there a hierarchy of Auburn bloggers? Seriously, you should do a poll. Surely someone out there agrees with me?

Oh forgot about this… have the last two seasons’ games not made you realize that an Auburn game isn’t over until the clock hits 0:00?

It’s like she claims to be a fan but doesn’t want to watch them play, even if they are losing. I can understand not wanting to watch a heart-wrentchng loss but it makes you who you are as a fanbase.

I’m writing you an e-mail right now WarBlogle. Hopefully it’ll make it to the bag next Tuesday.

I’m not sure you can successfully argue that I’m not a fan just because I asked if it was ever appropriate to leave the game early. I stated that I have never left a game early due to losing.

Since when did the AU Tigers concern themselves with logic?? It was un-logical to think we would win against Bama in Bama last year going in. Then to come from behind 24-0, well that was laughable. Beat South Carolina a 2nd time on a neutral site, no way!; we decimated them. A national Championship; surely we were joking?? We lost Cam and Nick and most every one of our starters, logic says we’d have a 4 & 8 to 5 & 7 season at best and here we sit at 5-2! Hold Florida to under 200 yards offense, are you kidding me?? LSU couldn’t even ’em to under 200 yards! Hmmmmm…..

Here’s your logic, Auburn is 19 & 2 over the last 13 months. Of those 19 wins we had no chance of winning 4 of them (That’s probably a conservative figure). We have a bad habit of finding W’s where they don’t belong and bringing ’em home. Maybe that’s not “Logical” but it is the cold hard truth. Sometimes truth is just, well, un-logical. War Eagle!