Your two favorite #18’s, Wes Byrum and Kodi Burns, will be at Auburn this weekend as part of the “Sports Illustrated Heisman Tour Presented by Nissan.” Details are below. Based on a few tweets, it appears that there will be a lot of former Tigers in Auburn this weekend for the game. A lot. 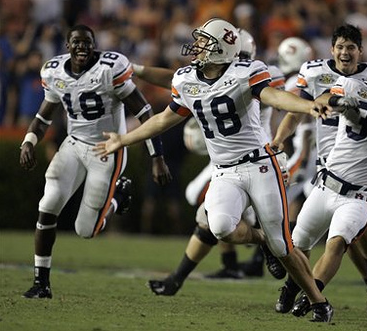 WHAT: Sports Illustrated and Nissan have teamed up to celebrate the Heisman Memorial Trophy and the greatest games in the history of college football with a 10-stop national tour at marquee matchups this season. Admission to the tour is free, and fans are encouraged to pick up a Sports Illustrated special-edition magazine that showcases “College Football’s Unforgettable Games” … compliments of Nissan.

WHERE: Located in front of the Nichols Center, at the intersection of War Eagle Way and Donahue Drive. Look for the big Nissan/Sports Illustrated helium blimp flying overhead!

Wes, oh, Wes, it is not the same without you. Cam and Nick and Kodi, I miss them. But you, I mourn. Sigh.

[…] Jeris return for another week of the Roundtable. I can't find Kodi yet. He may be preparing for his appearance in Auburn tomorrow. If he gets his responses in, I'll add them to the post. Beat Florida. 1. Did the NCAA's recent […]