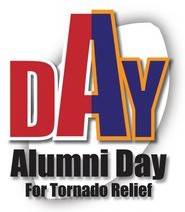 Tomorrow night, in an effort to raise money for the April 27th tornado relief efforts, former Auburn and Alabama football players will take part in a charity flag football game at Spain Park High School in Hoover, AL. You can get your tickets and any other info at AlumniDay.com.

I applied for media credentials for the event in hopes that I could get down on the field and get some good footage and info for you. Remember, I only do this for you. I was granted credentials, so hopefully I can get some good stuff.

The response from former players has been pretty big (roster list). It has to be exciting for them to get back out on the field, and even more exciting for fans to see the greats line up one more time. If you are like me, you were probably wondering how this would work. Are 70-year old guys going to be trying to run down Kenny Irons? How do you fit players from four decades on one field and make it anything more than a playful scrimmage?

This morning I received an email that gave a few more details about the event and answers some of these questions.

If you’re in town, you should definitely go. It’s for a good cause and should be fun. I just hope someone says “I tell you, the real winner today is the State of Alabama.” Classic Shooter McGavin.

Malzahn, Bielema in ‘The Fast and the Furious’

Highlights of Auburn 51-10 Win Over Arkansas