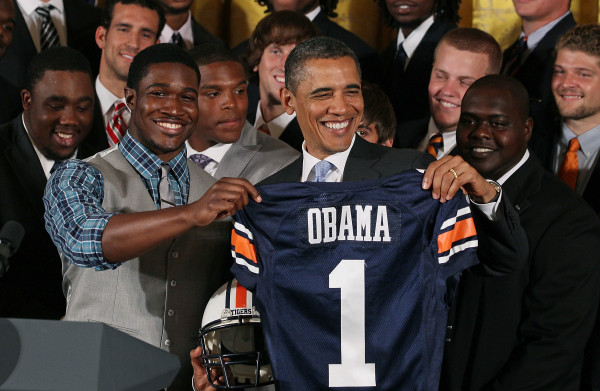 The 2010 Football National Champion Auburn Tigers will visit the White House today. You may remember the previous trip was cancelled because of the tornadoes back in April.

You could watch the team meet the President live (at 2 pm CT) on WhiteHouse.gov, but wouldn’t you rather watch it here instead?

Update: The live stream has come and gone, but it appears that the White House posts the old streams to their site. Once that’s up, I’ll steal it and put it up here. <deadpan>I’m going to steal the video of the Auburn Tigers visiting the White House.</deadpan>

Update 2: I’m tired of waiting on the White House to post their video. Here’s one that someone posted to YouTube.

Here’s the full transcript from Obama’s meeting with the team.

Clemson Review: All Good Things Must Come to an End

That was so worth watching at work (taking a chance!). Thanks for posting it and reminding me to watch it. I loved every second. Nice to have a president that probably DID watch the Iron Bowl, even if he likes basketball better. Why was poor Wes Byrum stuck in the back? He should be in the center between Nick and Cam. As far as I am concerned he is (was) the most important member of the team. (when life gets you down, go to YouTube and watch the Florida game where he has to kick the winning touchdown TWICE and then gator chops those cheaters).

Overall, it was really nice. I hope the guys all have a great time there on their visit.

War Eagle, National Champions, the President has said it. It is official.

Thanks so much for posting! I loved it, such a great visit!