According to a Webtrends report on the Twitter buzz just before, during, and after the BCS National Championship game, the Ducks (#goducks) just eeked out the Tigers (#wareagle) in usage of team-related hashtags. However, as expected, the momentum of the tweets shifted with the momentum of the game.

Webtrends is an Oregon based company, so I’m tempted to call shenanigans, but I have noticed the need for more “wareagle” hashtags in the Twitter-sphere. Imagine someone from 3 years ago or someone over the age of 45 reading that last sentence. Full on brain-meltage.

Below is a graph showing the trends, and a here’s a blog from Webtrends explaining the report in more detail. 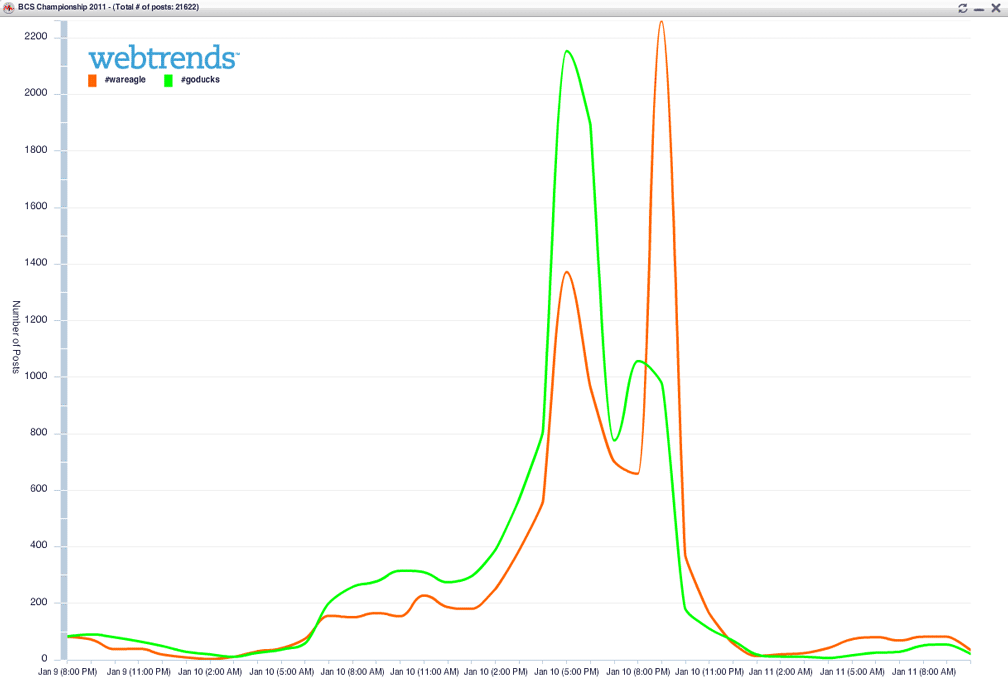 If you’re new to Twitter, or still haven’t jumped the train, hashtags are used to describe what you just Tweeted about, or to add a bit of information that you couldn’t fit into the tweet. So basically all this means is that more Duck fans used #goducks in their tweets than Auburn fans used #wareagle in their tweets. It doesn’t necessarily mean more Ducks were tweeting about the game than Tigers. Ok, now my brain is about to melt. Anyway, they can have their hashtag win. I’ll take our National Championship over that any day.

Ole Miss Preview: What Is Needed

Is there any way to check into this further? All I ever see mentions to are the #waregle –nothing about #auburn! I was tweeting during the game. The #auburn hashtag was moving so unbelievably FAST, you could not even try to read it! It was like this for the entire game! The #wareagle hashtag which, if I can be a judge, is not as often used — was moving slower (i.e. you could actually read the thing). There were A LOT of Auburn Tigers commenting that night that it made ABSOLUTELY NO SENSE that the Oregon hashtag was trending. None of us could believe that #Auburn wasn’t trending. Does anyone know how we can followup on this in more detail? I’m harboring a possible conspiracy theory that the ducks rigged the report (well, why not?!) But then, since relatively few of them showed up for the game in Glendale (as compared with the Auburn Family there & evidenced by this SI photo http://sportsillustrated.cnn.com/multimedia/photo_gallery/1101/cfb.bcs.title.game.auburn.oregon/content.2.html) perhaps the rest of them were at home tweeting? WAR EAGLE!!!

I’ll see about that. I’m sure #auburn was tweeted more.

I’m still fairly twit-illiterate, so hold my hand on this one: So what you’re saying is that the majority Oregon fans were playing on their computers and talking about the game while the majority Auburn fans were sitting in front of the television and actually watching the game?

Not necessarily. I don’t know anybody who tweets from their computer really. but given the lack of cell phone signal inside the dome, it adds to the fact that more Auburn fans were inside the Dome than Duck fans. More Ducks were at home and able to tweet.

If it wasn’t for the Oregon cheerleaders this wouldn’t have been close.