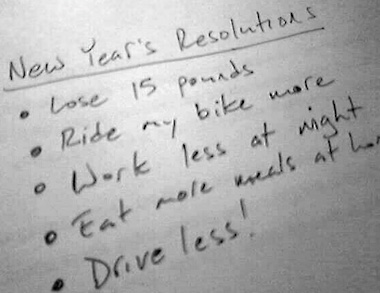 Let me be clear, these resolutions have nothing to do with the man behind the ‘Blogle. That man only has two resolutions, and they are the same every year: 1) don’t die 2) don’t make anybody die. I’m doing pretty good so far.

This list of resolutions are based on my hopes and dreams for this site in the coming year. Now that we have that out of the way, have a look at the things I want to do, accomplish, and change when it comes to all things WarBlogle.com. Some require your feedback, so please feed back.

1. Make money with this thing. The most important thing that I would like accomplish in 2011, which also is the most far-fetched, would be to make myself, Beautiful ‘Blogle, and Baby ‘Blogle completely financially dependent on WarBlogle.com and the ‘Blogler’s online presence. This may be a few years off, but the growth of the site and my Twitter followership from just last year was amazing. If it continues to grow exponentially as it did in 2010, you never know. I’ve recently made small business partnerships that have given me a little publicity and a few perks, so if those keep happening maybe cash is a possibility in the future.

2. Actually blog more. I’m not sure if I should be proud of the fact that the most successful year of WarBlogle.com was also the same year that I actually wrote the least. As I mentioned in my Top 10 Posts of 2010 post last night, I got lazy. I posted lots of videos and promoted others’, but in turn I got away from blogling. Sure there was the standard predictions, reviews, and previews, but I never really just wrote a random blog about what was going on with the Tigers, unless you count the novel that followed the tweet heard ’round the Vegas strip. I mean the name of the site is WarBLOGle.com. I need to do that more whether you want to see funny videos or pictures of Cam in a tutu or not. Don’t worry, those types of posts will stay, they just might have a few blogs in between.

I guess with all the hoopla surrounding the Auburn Tigers, Cam Newton, and all that other stuff, I got a little overwhelmed. There was so much that I could haven’t written about that I let it intimidate me and I just didn’t really post anything. Plus, I follow entirely too many other blogs and writers on Twitter, and I let the fact that they had written something push me away from writing about something similar. I shouldn’t have done that. This is my ‘Blogle and I should post my opinion if I want to, regardless.

3. Add a ‘Vlogle to the ‘Blogle. I’m still trying to figure this one out. I know I want to do something vlog (video blog) related, but I have multiple possibilities and questions that I have to figure out before this becomes a reality. I wanted to start it the first day of the year and that could still happen, but I’m just not sure of how I want to do it.

One thing I do know is that it won’t be the sort of the thing where I sit at a desk and stare at the camera and talk. Some of it might, but not all. I’d like it to be funny, semi-edited, and at times look like a home movie or Blair Witch Project. As you can see, I have lots of ideas and many possibilities. I’ve listed my two main conundrums below. Let me know what think. I really, really do need your feedback.

-There are a few people who read the blog and/or follow me on Twitter that know who I am, but for the most part I am anonymous. It’s not hard to figure out who I am. If you really were a true reader/follower, you would know my name and with a little stalking, even what I look like. I enjoy the anonymity, and I don’t think people would like the site (not that anybody does) near as much if they saw who I am and what I look like (picture a mixture of Tom Cruise and Paul Finebaum).

So in a way, I want to stay anonymous. It just makes things cooler, but if I want to do a vlog I don’t see how that could be possible unless I wore this. So…do you want me to stay anonymous and not do a vlog, or do the vlog but just never appear on camera, or do appear on camera with the mask, or screw it all and show my ugly mug on camera? Lots of questions, I know, but let me know what you think.

-Now, assuming I do the vlog, mask or not, I don’t know that I could talk about Auburn every day, especially in the football offseason. I do love all Auburn sports, but I’m just the normal Auburn fan. I love football, like basketball, and really enjoy Auburn baseball (again), but I don’t know if there would be something to talk about everyday, or even every week.

So the other option is just to turn the vlog into a personal vlog with Auburn stuff included. Kind of like a behind the scenes of the WarBlogler and his family, and make it primarily Auburn when the Tigers are in season. This idea sounds the best to me, but that anonymity thing would probably fly way out the window. So…when it’s not peak Auburn season, do I go full on personal or just try to scrape some Auburn stuff out of a mid-Summer’s night? What do you want to see?

Now why do I want to vlog? Mainly because I’ve been following a few guys on YouTube who making a living from basically just showing their life on camera. I mean literally driving to the grocery store, holding a camera, saying a few witty things, and sometimes promoting some product or website. And they get paid for this by YouTube and the companies they promote. One guy feeds his family of six, and he seriously just holds a camera most of the day. I initially wanted to do this, separate from WarBlogle.com, and just go all personal and copy these guys, but I figured it would be cool for the ‘Blogle readers and easier to start with a good base of followers than just some random dude who just started posting videos on YouTube. Ok, I’m typing way too much about this vlog thing. What do you think I should do?

4. Keep hatin’ Bama. Definitely the easiest on the list, and don’t give me the speech about hating and how we don’t do that. It’s just sports talk. I sportingly hate Bama, and they hate me. It’s the circle of life, and I will continue to be a part of that circle.

Thanks again for all of your support in 2010, and I hope that these new ideas, dreams, and aspirations will give you many more reasons to return to WarBlogle.com, follow the ‘Blogler on Twitter, and join in on my love for Auburn and hatred for Alabama.

5. Forgot one. I want to get the ‘Blogle nation more involved with the site. Plain and simple, I love comments. I love feedback. It shows you care, and I want you to care because I care. Here’s a good place to start: post your resolutions with Auburn flair in the comments section below. You’ll feel better for it.

I hope to make it easier for you to comment and join in on the banter, and maybe add the option to post directly to the ‘Blogle at some point. Stay tuned, and maybe one day you’ll be a shareholder at WarBlogle.com Enterprises.

Thanks again for reading this random dude’s Auburn related thoughts and War Eagle!

Toomer’s Eagles Return to their Homes

Auburn is Losing a Leaper, but Gaining Another Soon

You asked for suggestions, so here are my two cents on the whole vlog thing. I despise the youtube morons that tape their entire lives. I don’t watch those videos, and I wouldn’t watch them here. If you think you can make a living doing it, go for it, and more power to you. But no offense, I really don’t care what your trips to the mall with your family are like. I am here because I love Auburn.

If you were to limit the vlogs to football or auburn, it could be better, but I am mixed on this. As I am sure you are aware, ESPN started vloging in their blogs this year, and I am not sure I like it. It is good when Dinich does it (very cute) but I don’t really like C Lows vlogs, or anyone else’s for that matter. I think that there is a certain credibility to the written word that is sort of lost when you are just talking into a camera.

Those are just my thoughts, and reasonable minds will differ.

I’d probably be ok with it as long as you kept your blog of words as well. Things I think would be neat would be to show your kid dressed in Auburn gear or video of special Auburn stuff. Including regular life would be ok with me, too. You could do a combination type thing, because if you are anything like me, everyday life includes Auburn stuff (daily). Since I am back to work Monday (teacher), I will not be online as much but will still read and catch up in the evenings.

I agree with Craig. I consider vlogers too lazy or illiterate to write. If you do videos, they need to capitalize on some visual aspect of the post which can only be conveyed via the movie medium.

Talking heads are less impressive than the written word. But Cam flying into the end zone like Superman is a cool video.

I don’t like vlogging unless it is a special event/occasion like you need to SHOW something that works best in a video like the Lutzie. Everday vlogging is boring and like TigerEyez13 said, lazy. If I want video I’ll turn on the tv. I don’t think blogs have to be long, though, blogging every day or every other day is best.

I like the Keep Hatin’ Bama resolution. I’m going to adopt it. I would use it on UGA as well (really really really loathe the Dawgs, ugh, UGA) but I almost feel sorry for them this year. Almost. I have to say I have never felt sorry for Bama no matter how bad they were in the past, so I can say I can keep the resolution to hate them.

Whatever you do, keep on, brother!