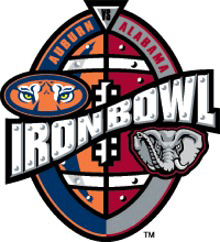 Let me start this preview by saying that if this game was being played at Jordan-Hare Stadium, I would say Auburn wins easily and leave it at that. However, the Tigers will not being playing inside their friendly confines on the Plains, and must make the northwest trek to Tuscaloosa.

The forecast calls for cold weather and rain before, and possibly during the game. First off, when was the last time the Iron Bowl was played at Bryant-Denny stadium when it wasn’t cold and rainy? Considering the two teams have only played six times in Tuscaloosa, I’d say there’s a pretty good chance that the answer to the question is “every time”.

If the forecasts are correct, it should benefit the Tigers. Auburn’s obvious strength is their running game, and unless the field is just a sloppy mess, the ground game shouldn’t be affected. Auburn’s obvious weakness is their secondary and pass defense. We all know that when rain is falling, thrown balls usually do the same.

Besides the fact that Auburn will be playing in front of the most hostile crowd they have seen this season, the only thing that worries me is the screen pass to Julio Jones. The down-the-line pass has killed Auburn almost all season, but in their defense (no pun intended), there is no way to perfectly defend that play. As long as the pass is thrown on the mark, the catch is going to be made. The defender just can’t get to the receiver that quickly to break it up.

However, the problem that Auburn has is the soft coverage that is typically used in Ted Roof’s defense. Most of the time, the defender is ten yards off the line of scrimmage, giving the receiver at least five yards of free room to run once they’ve made the catch. Then, if they play up on the line, they run the risk of the reciever running right past them. This is why cornerback is the toughest position to play, next to quarterback, in all of football. They are at a disadvantage in almost every situation. Anyway, it’s going to be raining, so who cares right?

Since Alabama’s passing game won’t be as effective as Tide fans would like, it will put the pressure on the running game that hasn’t been near as effective as last year’s. Given the fact that Auburn stuffed Heisman trophy winner Mark Ingram last year (30 yards), the much improved defensive line should have no problem with a ground game that simply hasn’t been that strong.

Trent Richardson is returning after a week off and could challenge the Auburn defense, but again, with the passing game possibly being slowed by the elements, the Tigers can lock down the running game, which is still Alabama’s strength, and force the Tide into throwing against the weather.

In Alabama’s loss to South Carolina, they fell behind early, abandoned the running game, and went to the pass. They did rack up their heighest passing totals of the season, but it was obviously not what they wanted to do and obviously not a strength. If Auburn can score first, and possibly get up by 14 in the first half, the Tide will be forced to do the same.

If I was Chizik, and the Tigers win the toss, I would take the ball first. You want your strength on the field first, and with Auburn’s offensive power it would be great to start the game with a quick score to show the Bama faithful that the Tigers aren’t going to lay down because of a raucous crowd.

It wouldn’t be a killer if Alabama took the ball first and scored, putting Auburn in an early hole. Auburn lives in an early hole, but coming back in front of that crowd against a team hellbent on ruining their season would be nothing like the earlier games where they fell behind early. That would be a completely different challenge altogether.

Like I mentioned earlier, this will be the loudest opposing crowd that the Tigers have played in front of this season, by far. This is also probably the toughest test they will have faced all season, given the situation. Shutting the crowd up early will be the best thing they can do. Giving up early points, or bogging down on offense is the last thing the Tigers need to let happen. A good, quick start is essential.

Now, after all that let me just make it quick and easy:

I always say that I don’t predict the Iron Bowl, but ever since I’ve said that (in blog form), I don’t think Auburn has won. I’m changing that this year.

Auburn wins the toss, takes the ball, and scores. The defense will give up a few touchdowns in the first half, but following the ever popular Ted Roof halftime adjustments, they will generally shut down the Alabama offense in the second half. Like all road games, Chizik and Malzahn will go into “just don’t lose” mode with a 10 point lead in the 3rd-quarter, which will give Alabama new life at the start of the 4th. The Tide will score to get it to a 3-point Auburn lead, but Cam and Company will use a long drawn out drive to drain the clock, scoring with just under a minute to play.

There are three possibilities to start the third quarter- you are winning, tied or losing. I want the ball in all three situations. I think rain favors the receiver since he knows where he is going and often corners have trouble keeping up, slipping when they make their cuts. WDE! AUTigerwalk.com

Honestly, I’d prefer that we abandon the “just don’t lose” philosophy and adopt the “we’re here to win” mantra. Meaning: let’s step on their necks and not let up. It’s going to be a great game. WDE!!!