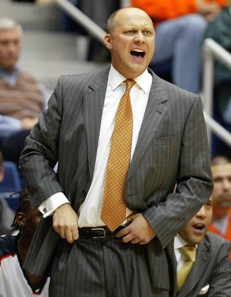 Much to the delight of some and the chagrin of others, Jeff Lebo was fired today. He ended his Auburn coaching career with a 96-93 record including a 35-61 record in the SEC. I will have more thoughts later, but for now here are the initial reports:

Statement from Jay Jacobs:
“I want to thank Coach Lebo for all that he has done for Auburn University over the past six years. Coach Lebo has worked hard and has always represented Auburn with character, class and integrity. However, we feel like the time has come for Auburn basketball to move in a new direction. We deeply appreciate. all that he and his staff have done for Auburn, and we wish each of them and their families nothing but the best.”

What are your thoughts? Did Auburn make the right decision? Who would you like to see hired?

Highlights of Auburn’s 73-70 Win Over LSU

Highlights of Auburn’s 90-86 Win Over Arkansas