I originally posted this on al.com‘s Tigers Corner, but after hours of replying to comments from Bammers that only proved my points even more, I decided that I couldn’t take it anymore and took it down. So now only you, the amazing WarBlogle.com readers, get to enjoy it. Let me know what you think.

Much has been written about the 2009 Iron Bowl, who dominated the game, who should have won, etc. Both sides will argue their case on these points, and others like them, until the end of time. The truth of the matter is that most of these questions don’t have a true answer, but these annual disagreements are what makes Auburn-Alabama a great rivalry.

For example, even when a team dominates for a good 95% of a game, the other 5% is enough for one side to forget the majority of the game and brag, even though just before the game, that side’s predictions were a blowout in their favor, but I digress. In general, there is never any sort of resolution with any sort of questions, quandaries, or issues regarding any game played between Auburn and Alabama.

All that being said, I believe it is now, more than ever, apparent that some sort of agreement can be made when it comes to one issue regarding our Tigers and their Tide: if you call yourself a good person, being an Auburn fan is classier and just makes more sense than being an Alabama fan.

I have played under at least twenty different coaches in various sports during my lifetime. I don’t think that it should come to a surprise to anyone, but every single one of them cussed in some way at some point of a practice or game. Cussing is just a part of male athletics. It’s just one of those things guys get used to early in life when it comes to sports.

On a side note, I always thought it was funny that in high school if your math teacher told you to get your a$$ together when it came to parallelograms, it probably wouldn’t go very well with the PTO. But put a hat on that same math teacher’s head and a whistle around his neck after 3:30, and he can say whatever he wants with no problem.

By now, you probably know where I’m going with this. If you guessed that I’m going to talk about Nick Saban’s choice of words during radio and television appearances, all open to the public, then you are correct.

There is a certain sect of people who don’t cuss, but will use every opportunity to quote someone who has cussed, as a free pass of sorts. I guess it’s their way of getting out the angst that only cuss words can release without actually stooping low enough to use the actual words. I personally think that they have an underlying thought that cussing is “cool”, and this is their free way to do it.

Is Nick Saban one of those? Not entirely, but I think he’s close. Saban is one of those people who apologizes immediately after doing something that he knew was wrong and thinks that somehow it makes it all okay.

During and after the Iron Bowl, he used the term “blank-storm” where the blanked-out word starts with the same letter that “storm” does and represents something that doesn’t smell very good. He said this term twice on live radio. Both times he immediately said “sorry for my language” following the S-bomb. Well that makes it alright coach.

During his post-game press conference, he used a term commonly used to refer to a donkey, immediately followed by “I shouldn’t use that language”. You’re right coach, but you did.

I will reiterate the fact that I know cussing in sports is just going to happen. When men get riled up on the playing field, 99% of the time a word that isn’t family-friendly will come out to help make a point. We all know that some words just help stress a point better than others, but 9-year-old kids listening to the radio during an Alabama football game don’t need any point made to them. There’s just no need for it, and it’s just not classy.

I am not naive to the fact that Auburn coaches cuss on the field as well, but that’s not my point. I’m talking about representing your team and school, and knowing when it’s best to be spitting out expletives.

On Auburn’s weekly show “Auburn Football: Every Day…”, Chizik is never seen cussing, even in the heat of the game, or in the locker room following a big win. Yes, I realize this show is not live, and is edited for TV, but I don’t think that matters. In fact, there have been two times that I remember where he was about to say “the d-word”, obviously the most innocent of all cuss words, and would remember he was on camera, catch himself, and smoothly turn it in to a “darn”.

Again, I realize that the state and direction of college football programs are not decided by which coach cusses the least, but it’s very telling when one coach stresses to change a “d-word” to a “darn”, and another guy drops any A-, S-, or F-bomb that he wants to on live TV and radio.

Something as small as this on the outside always pans out to something bigger on the inside. In this case, Saban’s lack of class, care, and couth shows the world what kind of program he runs and what sort of values he is teaching his players.

In last year’s Iron Bowl, when the game was well in hand, CBS’s sideline reporter informed the analysts, and the nation, that Saban was on the sideline yelling at his players to continue to score, and then asked his players “Don’t you know how much I f—ing hate these guys?!!”.

Speaking of piling on points…I was reminded the other day that in 2001, when Saban was still at LSU, Tuberville’s Tigers were up on Saban’s Bengal Tigers 31-7 in the closing minutes of the game. The good Tigers were inside the 20-yard line with another chance to score. Tuberville elected to take a knee and save Saban and LSU any further embarrassment. Seven years later, Saban returns the favor by throwing deep with his team up by 30.

Classy? You tell me.

Before I make my last point, I want to say that I am not using this blog as a religious platform for religious debate. This is a place for Auburn talk and banter, and that’s all it is. That being said, I’m pretty sure 99.9% of the people reading this claim themselves to be some sort of Christian. If not, I’d say the other 0.1% wouldn’t have any problem with the Christian actions and values that I am about to mention. 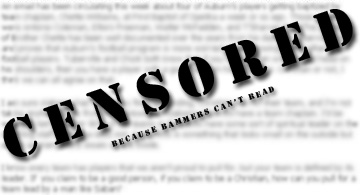 Most Alabama fans just like to ignore these facts, and only care about winning. Don’t get me wrong, during a game I could say the same about myself. Winning is very, very important. That’s sort of why we have athletics right? As I walk out of the stadium following an Auburn loss, I’m not thinking about our players being better men, but in the long run, that’s all that matters, and will eventually lead to better days and championships.

I know that if a program is built on solid values, class, and respect that many years of greatness will follow. I know that if you don’t care enough to bite your tongue in public, look like you want to punch someone just because they asked you a question, and demand that your players pile up the score to satisfy your hatred, then the house of cards will soon begin to fall.

I’ll end this with a question. If you are a recruit’s father and want your son to go to a good school with a good coaching staff that is worried about your son becoming a better man and then a better football player. Who would you choose?

Just read your review. Nicely done. I found it humorous that apparently RollTideGal signed up just to post her hate-filled diatribe as a comment – it’s her only activity on al.com according to her profile.

Am I not old enough to read this or something?

When I was in the Army, I was assigned for a year as a TAC Officer at Officer Candidate School at Fort Benning. One of the ‘restrictions’ placed upon us was that in this super-intensive program (16-20 hour days for 14 weeks) designed to graduate only 50-65% of those who attend, we as TACs were not allowed to cuss in any manner.

What we learned was to impart instructions and give commands and be just as imposing and intimidating without it. It was a revelation in human behavior. Having to chew out a candidate without the crutch of cussing meant that we had to focus on the use of normal language, both verbal and non-verbal to catch their attention and focus on the tasks at hand.

I remember one TAC had his platoon out for ‘corrective instruction’ at about 9:30 PM and began to contrast their recent (poor) behavior with soldiers who had fought before them. He spoke about the sacrifice (while dropping the platoon for various intensive exercises) of soldiers in historic battles like Meuse-Argonne, Antietem, Gettysburg, Bastogne, Cassino, Normandy, etc. Nearing 10 o’clock, he changed it to the vision of white crosses stretching to the horizon at Arlington and openly wondered how many might be there due to the ineptitude of thier officers. His last words, timed perfectly, were ‘….like you’.

At 10 PM every night on every training post in the Army, Taps is played over loadspeakers.

The effect was magical – there wasn’t a dry eye in the formation, and he left them at attention for a full three minutes as the echos from Taps died. From that moment on, his platoon exceeded all expectations and more importantly, began to gel as a cohesive team.

I see Chizik practicing this same sort of leadership with this team, with great effect.

You need to add the side of Alabama’s thoughts.

But auburn is way better than alabama

I am glad that somebody sees a logical, religious based answer of why we are better than bama. I live in Clemson tiger country, SC, and even still, there are bama fans. Every year, I must put up with their arrogance. I am glad that somebody actually took the time to put together, what I think, is a completely valid argument. I very well might use these points to evangelize the bama fans in SC. Again, well done, and War Eagle.