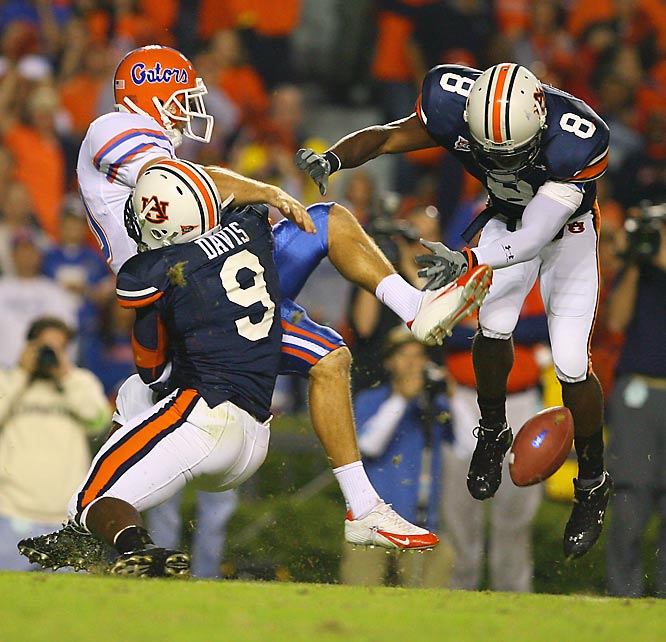 How I Remember It: I got to watch this one from the 50-yard line, about 30 rows up, behind the Florida bench. They were, at the time, the best seats I’ve ever had at an Auburn game, and it just so happened that it was for one of the best, or at least most exciting games that I have ever attended at Jordan-Hare.

The Tigers struggled in the first half, got their butts chewed at halftime, and came out and whooped the Gators in the second half. We got our first glimpse at Tim “I did everything but beat Auburn” Tebow. There was the Tray Blackmon fumble recovery (or was it an incomplete pass?) that ended a Florida scoring threat. Tre Smith did a flip after a blocked punt, and Patrick Lee returned a fumble on the last play of the game to pad the score.

In many of the top 30 games, I have said that they were one of the loudest games I remember. At the time, this one was THE loudest game I remembered at Jordan-Hare.

Going into the 4th, Auburn led 18-17. In the Gators’ first drive, they would get down to the Auburn 21-yard line, but Tray Blackmon, in all of his “see ball, get ball” glory, would cause a Chris Leak fumble. The play was reviewed, and the call was held up, much to the chagrin of Urban Meyer and Lee Corso.

Leak’s arm was moving forward at the time of the fumble, but not in a throwing motion. It was more of a “oh crap, look at that guy’s arms” motion. The fumble recovery ended Florida’s only real scoring threat in the 4th quarter.

Why did I pick this game? Loudest game ever (at the tie), win over #2 in the nation, who also happened to be Florida, and a dominant defensive performance in the 2nd half.