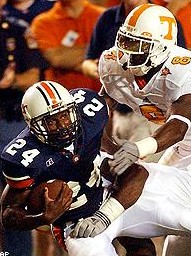 How I Remember It: This game was one of the loudest that I remember in my 25+ year Jordan-Hare history. Auburn was in the middle of its disappointing 2003 season, and if I remember correctly, Tennessee came in ranked in the top-10. Besides a late comeback by the Casey Clausen-led Vols, Auburn pretty much dominated the whole game. Well, they at least dominated long enough to get a good lead that would hold to the end.

I sat in the same spot that I sat for the loss to Ole Miss that made #28 on the list. I remember a pass to Ben Obomanu in the left corner of my endzone. I remember a few feelings of “man, how are we beating them this bad?”. I remember a few thoughts that my recently deceased grandfather was somehow making it happen.

Auburn then took six minutes to drive down to the Tennessee 29-yard line, but with a chance to seal the win, John Vaughn missed a 46-yard field goal with just over a minute to play.