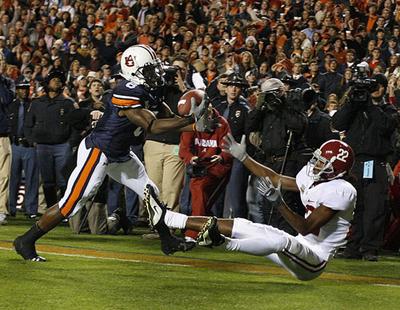 How I Remember It: The weather was supposed to be terrible. It was supposed to be very cold, and very rainy. I wore long johns under my jeans and rain pants over them. Like a woman, I took in a bag of blankets, towels, and a bunch of other gear you may need in a cold rain.

Well, it was pretty cold, but I don’t remember it raining. I do, however, remember regretting bringing in and wearing all those clothes. Don’t you know that adrenaline will warm you just fine, especially during an Iron Bowl, idiot?

Auburn was going for it’s 6th in a row over the Tide, as Saban brought in a 6-5 Alabama into Jordan-Hare. The game was a typical Tuberville-like win in a big game: get a lead, then hold on. There were a few big plays like Jerraud Powers’s interception in the end zone after D.J. Hall tipped the ball in the air. I remember Powers also being bitten by a police dog in the same endzone. John Parker Wilson had to be picked up of the ground a few times if I remember correctly.

All in all, it was a pretty uneventful game, but when it comes to the Iron Bowl, a win is all that matters.

What Really Happened: As shown by the score, this was a typical, defensive Iron Bowl. Auburn scored ten points in the first quarter (Ben Tate run, Wes Byrum kick), and Alabama scored seven in the 2nd to make the score 10-7 at halftime.

The teams went scoreless in the 3rd quarter, with Auburn keeping the three point lead going into the 4th. Brandon Cox scored on a 1-yard quarterback sneak halfway through the quarter, before Leigh, yes Leigh, Tiffin kicked a 49-yard field goal with two minutes left in the game.

Alabama attempted an onside kick, but Auburn recovered the kick, got a few first downs, and ran the clock out to win their 6th straight over the Tide.

Why did I pick this game? Some may argue that no Iron Bowl victory should ever be this low on any list, but in reality, other than this being a win over Alabama, there wasn’t anything too exciting about the game. Also, at this point, with it being the 6th straight win over Alabama, a 6-5 Alabama, winning the Iron Bowl had lost a little bit of it’s luster… at that point in time.

Play of the Game: Brad Lester’s 12 yard run on 4th and 1 to seal the win in the closing seconds.

Player of the Game: Ben Tate rushed for 77 yards and a touchdown. Those were seriously the best numbers of the game. I told you this game was ho-hum.

Quote of the Game: “It will last forever. It’ll mean something forever. We’re going to celebrate it tonight and the next night. Maybe about three or four days.” – Auburn DT Josh Thompson