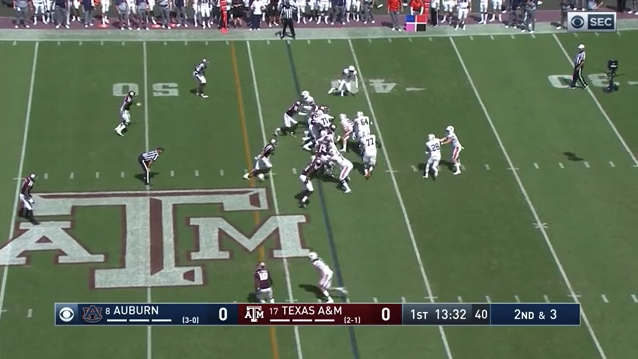 Welcome back to It’s Pronounced GIF! I know I missed both the Tulane and Kent State games, but being entirely honest, I doubt many people were reading too heavily into the strategic merit of analyzing performances against the Flashes/Green Wave. The Aggies however, are a different story. This is a team that recruited *very* well in the most recent offseason, and had a great deal of talent returning in their WR corps and QB.

I generally prefer to look at some of the less eye popping plays since I feel like those tend to reflect the state of the team much better than a few highlights would (worry not, I will go over that Schwartz TD), but there were a lot of great highlights this week, and sue me, I’m a little excited. Let’s get going.

We’re doing the Schwartz TD first, I can’t wait. People are going to look at this play and just see Schwartz being faster than everybody (and he is), but there are three key things that have to happen for this play to work:

Simply put, this is a perfect play call from Gus, and perfect execution from the offense, taking advantage of one of Auburn’s biggest strengths on Saturday: Perimeter speed.

Let us say with the largest understatement in human history that I really like the Gatewood packages. It’s very, very clear that Gus knows what to do with a very large, fast human being at QB. The GIF is a little fast, but I want you to watch the OL here. If that guard and tackle pulling across the formation looks a little familiar to you, that’s because that is exactly the same blocking scheme used for the newest buzzword in the Auburn offense: GT Counter.

This play is designed to go to Stove, but make no mistake, Gatewood can absolutely pull this ball if the defense is keying hard enough on Stove. Bo Nix is standing to the side, commanding almost zero attention (for now), but the blocking here is good enough, with a numbers advantage off tackle, for Gatewood to get a very nice gain out of this play. I like it a lot.

Continuing with the Gatewood thing, let’s all together say the strangest words ever spoken about a QB in a non-triple option offense. “He forces you to respect his throwing ability.”

This is throw all the way, there’s no read to it, and there’s barely any suspense to it for Gatewood. From the moment this play is called, Shenker and Gatewood know the throw will be there, because no one from TAMU has seen Gatewood throw the ball with any kind of regularity. Time to wake ‘em up. Shenker gets a free release because the defense is convinced it’s a run, Gatewood gets a beautiful set and throw because of an excellent block from Spencer Nigh. Touchdown Auburn.

Oh and for good measure, Gatewood had Cannella in the back of the endzone as well, on the off chance someone tried to cover Shenker.

For the record, I still don’t think this was a catch, but either way it’s an excellent throw by Kellen Mond, and Javaris Davis can’t cover that route much better. He’s in the right place at the right time, and shading towards the QB to make the throw as difficult as possible. It’s just one of those throws you have to give props over, and make sure they can’t do it to you twice.

Welcome to the game, Kaleb Kim. Kim gets a great block here, climbing a couple of yards before meeting the LB and opening two gaps to his left and right. Here, Whitlow makes a great snap decision and gets a really nice gain out of it, plugging along for a really solid gain here.

Notice also the lack of a HB or TE on this play. Auburn was running the ball with a lot more confidence in their OL late against TAMU, as the conditioning advantage began to make itself more apparent. Auburn was moving people in the 2nd half once again, and when Auburn runs the ball well, everything else gets oh so much better.

Y’all want trick plays? You got it! Buck Sweep reverse? Nah, that’s normal Auburn stuff. Backup QB fakes the run and tosses a TD to the TE? That’s not even a trick play, UGA fans know all about a supposed “run first” backup QB throwing strikes at will. Nope, Gus Malzahn, the master of all things trickery, in this most opportune time, opts to throw the mythical *slant* pass!

In all seriousness, I love the play design here. The double slants are meant to create a 1 on 1 for Seth Williams, Jay Jay Wilson more running his slant to draw the attention of the field side safety and keeping Seth alone. Bo Nix shows why he’s the starting QB here, by putting the ball in the perfect place, low and inside, to lead Seth Williams into the endzone. It’s a very simple play, but also a very helpful one to have in your back pocket on 3rd down or in the red zone.

If Texas A&M had covered the slant, Nix still had options on the other side of the field in Stove on an out or Cannella running a deep in for Nix to try and rifle the ball between zones.

Hey there’s that GT counter again! Whitlow does an excellent job here of following his blocks and being supremely patient waiting for his path to open up, and when it does, he goes from being a feather to a wrecking ball. Always a good sign when one of your pulling O-linemen doesn’t even need to block anyone.

Side note, this TD run is being executed from a 4 wide set as well, which tells me both that Auburn saw an advantage to spreading it out from a numbers perspective, and that Auburn is growing to have a lot of faith in their starting 5’s ability to move people and pass protect. They’ve given up 3 sacks this season so far. Three.

Last non-kneel down play here. I’m pretty sure this is a keep all the way by Nix here, as Nigh is coming around the edge for a reach block and there’s no unblocked defender on the weak side of the play. Gus saw that TAMU was playing Whitlow hard after that long TD drive, and opted to put the ball in his true freshman’s hands to ice the game. Nix also gets down inbounds here, saves Auburn from having to kneel it more than twice. Gotta protect those knees you know.

But hey, that’s all! Auburn played a great game against Texas A&M, and they did it on Auburn’s terms, which is I feel the most important part of the whole ordeal. I saw a lot of really really good things from Auburn, and just as much to improve on, namely the 2nd quarter offensive slump. Auburn needs to figure out a system for getting out of ruts deep in their own territory, and Nix needs to fix the deep accuracy, but other than that, Auburn played a good day of offense and defense.

These breakdowns are terrific. Thanks for doing them.