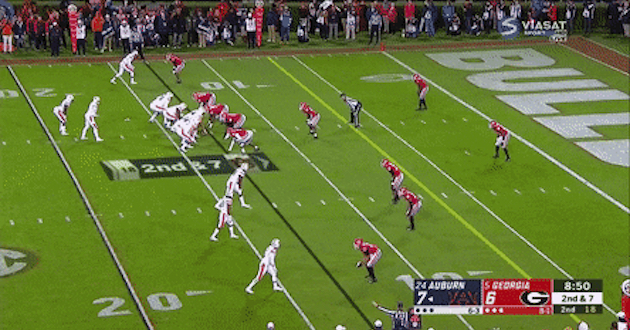 You can call me SanAUndreas. I’m an Auburn fan. I like GIFs. @WarBlogle likes GIFs and he is allowing me to cut up the previous weekend’s games and GIF them here. I really appreciate Blogle being nice enough to give me a platform from which to talk about my favorite team and sport. If you like this, let me know and maybe he’ll let me do it again. It’s a shame my first post has to follow a loss, but such is life. So here goes…

It wasn’t pretty, and I’m not going to try making it pretty. There wasn’t a whole lot of good on Saturday, and both sides dropped their responsibilities when they couldn’t afford to.

Auburn’s loss to Georgia reminded me a lot of last year’s Auburn basketball team. Everyone knew they had potential…

…that much was clear as day from minute one. They started strong and looked like they could hang with anyone…

The differences are in the downfalls of each team. For basketball, it was their lack of depth and size. They couldn’t physically match up with teams, and because of that, lived and died on the 3-point shot. For football, it was details: small mistakes, dropped passes, overthrown balls, barely missed shoestring tackles.

In some ways Georgia simply was too big in the places that matter to the run game, but in others, misreads and over pursuit killed any chance of an upset. Georgia’s offensive line won the line of scrimmage, plain and simple, but even when they didn’t, Auburn’s linebackers and nickelbacks were missing tackles.

But I will say this: the offensive playcalling, despite the execution, was not the problem. The gameplan that we all clamored for in previous was implemented by the coaching staff.

Ryan Davis was a factor.

There was a rotation at running back that did some good.

The gimmick plays were there.

The pass protection was as good as it could have been reasonably expected to be.

There is no reason this game could not have been won, and that, I think, is the real source of frustration with this team. When they find their rhythm and find something that works, it’s built upon and expanded, and it’s a beautiful thing to see, but when they can’t, it’s painful because you can see all these excellent athletes lose hope in real time.

Here are some areas for focus moving forward:

Continue to run the ball creatively.

Auburn had a good idea in trying to get outside runs working and for the most part it was effective. I want to see the staff continue to innovate on that concept and help make Boobee Whitlow another name on the list of 1,000 yard rushers. Keep in mind that he is doing as well as he is as a freshman, and while I know he wouldn’t accept that as an excuse, it’s encouraging that he’s a bona-fide SEC sunning back in his first real season on the Plains.

It feels wrong to type this, considering the background of teams that Gus Malzahn has coached, but Saturday’s loss is in heavy part due to routine mechanics of the game that were not executed correctly. Stidham’s crucial miss on 3rd down late in the 1st half is one throw that he should absolutely make every single time without question. It’s a simple dump off and it is no doubt practiced a thousand times before it sees the field, so I expect it to work when it’s called. This is just a single example of the nails that buried Auburn.

Here are a few others:

And finally, the missed tackles.

Let me be absolutely clear: if Georgia plays against Alabama the way they played against Auburn, they will lose badly. They did not, by any stretch of the imagination, play a complete game offensively or defensively. In the same vein, Auburn had to be able to capitalize on stops, particularly the stops the defense had in the first drive of the 2nd half and after the Jamel Dean interception. Those should have and could have been turning points in the game, but failure to execute doomed the team.

After the game, Deshaun Davis said that it’s good that we get frustrated at games like this. We know we’re better than that, and that we will be better than that. I understand feeling like the coaching staff failed the team, and I would agree with you in some respects, but let’s not tear down the program over one loss, or even a lost season. Yes, we have underachieved, but unless you have the best coach in college football history on your side, it’s going to happen from time to time.

Truthfully, I could go on forever about this game, and this season, and how it has diminished my faith in the fans who laud Gus as a great coach in one breath and call for his head in the next, but that’s enough grandstanding for me for right now. 0-12, 7-5, 12-0, I’m an Auburn fan, and tomorrow I’m going to go find someone in an Auburn hat and tell them War Eagle.

I recommend you do the same, it’s a great feeling.

GIFs are money. Keep the man. Double his salary!

So refreshing to see a level-headed post. Thank you. and War Eagle!