Baseball remains to be a sport of tradition and unwritten rules, as the use and enduring style of stirrups shows. Stirrups in baseball have a history of style, hygiene, and function. They’re just part of the game, but they’ll seemingly never go away. In fact, they’ve made a big comeback after falling out of fashion. 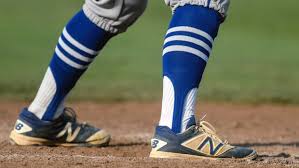 Read on below to discover why they’re timelessly cool.

A Brief History of the Stirrup

Manly calves are made to be shown, which is the origin of the stirrup. In 1848, the aptly named Cincinnati Red Stockings became the first baseball team to show off their socked legs. It was a publicity stunt, but it became as standard as caps and button-down jerseys.

However, these were just socks. It was Hall of Famer Nap Lajoie, who inspired the stirrup in 1905, with blood poisoning. After getting spiked on a rough slide, the dye in his socks entered his bloodstream. He was laid up for all but 65 games that season. Lajoie was a hustler and he wasn’t about to change his style. As a result, he took to wearing a white sanitary sock against the skin, with the characteristic stirrups in team colors on top. These stirrups actually looked like socks, not like the straps we see now.

In the 1920s, solids gave way to stripes, which opened a whole array of coloring options. Stripes on white was a standard until the 1960s when the Kansas City Athletics was the first to use a colored sanitary sock. In their case, it was a shocking gold.

Stirrups got pulled up higher and higher, to just below the knees, in the 1970s. It was the fashion, as it made the legs look longer. Then things just got out of hand.

We’ve seen a 2-in-1 sock with a painted-on stirrup. There have been retro trends back to the solid color, and again back to the stripes, and a whole variety of colors. But not everyone has embraced the sock brace.

Around the 1990s, out of either laziness, rebellion, or just boredom, the lowrider style swept Major League baseball. With players like Barry Bonds taking the lead, there was really no need for stirrups.

Many players took to wearing their socks all the way down to the ankles, creating a pajama-like look. With things like pre-scuffed helmets, evolving hairstyles, and a general desire to add more pizzaz to baseball, the trend remains.

Meanwhile, some players hold on to the tradition of high stirrups, while others, like superstar Bryce Harper, wear a whole variety of looks. As changeable as the weather.

Clearly, blood poisoning from sock dye is no longer a hazard. Modern uniforms are safe, rules are far stricter against aggressive sliding, and there’s really no need for stirrups. Yet they remain cool, for some, but not all players.

For one, many think they look cool.

Baseball stirrups typically come in 7-, 9-, or 12-inch cuts. A higher cut shows off more of the sock underneath. The color combination can be used in various ways. Some like an old-school look with less sock, while others tend to be more into the 70s high-cut look. As baseball players are notoriously idiosyncratic, many players have their own preference for their socks and stirrups, just as they do with their bats, gloves, and pre-game rituals.

Stirrups are also practical and can improve comfort. New features such as moisture-wicking fibers and odor-control can air out the lower leg. They’ve also been found to increase comfort and reduce foot fatigue.

Finally, in the show of solidarity that coordinated looks and colors create. For the same reason, every player wears the same basic cap and uniform, the stirrups can be coordinated.

Unlike sports such as football and hockey, the baseball uniform has not radically changed in the past 100-plus years. There are better materials, new color schemes, better-fitting helmets and caps, but the basic look is consistent. Stirrups are part of that look and project tradition with a touch of style.

5 Benefits of Having a Lightning Detection System for Sports Fields