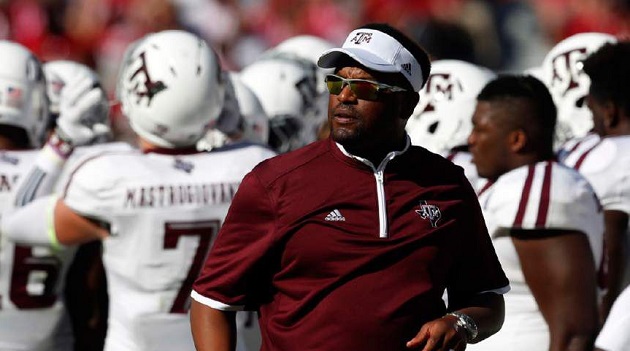 Matthew Bartlett (@_MBartlett_) is a national college football writer and a stats junkie. He always hopes for the upset and has never wavered in his support for Texas A&M. Matthew currently serves as the site expert for Gig’em Gazette and Saturday Blitz. Matthew is making his first appearance on the Other Sideline. Be nice to him. He’s not very high on his Aggies.

Auburn is one of the best teams in the SEC, but there still seems to be a differentiation between them and Alabama and Georgia. While the Tigers do have some flaws they’ve also continued to find wins at Kyle Field, which has been something Texas A&M has struggled to do. On the whole, I wouldn’t say Aggieland is that impressed.

Frustration. This team has done just enough to get our hopes up every year since Johnny Manziel left but it’s always ended with a sour note. Aggies haven’t given up on their team, but they’re grumbling about some of the performances and coaching decisions. What have you done for me lately has been the talk of the town for a while now.

3. Why has the road team won every game in this series once the Aggies joined the SEC?

Parity? It’s safe to say that Texas A&M and Auburn have been fairly evening matched since the Aggies joined the conference in 2012. More often than not its been miscues by the home team that have determined the outcomes of several of the games. There’s nothing mystical about playing at home, just two evenly matched (and mistake-prone) teams slugging it out.

4. Who is playing quarterback Saturday and why should I worry?

Kevin Sumlin is going to stick with Kellen Mond. He’s done enough to earn the starting job and the issues with the Texas A&M offense haven’t been his fault. The receivers have played extremely poorly and the running backs have disappeared. With a patchwork offensive line the running threat of Mond is the Aggies’ best weapon. That’s going to be the x-factor that could give the Tiger defense trouble. That said, we’ve seen enough of Kevin Sumlin’s quarterback decisions to give put little stock in probabilities at this point.

5. Where will Kevin Sumlin be coaching next year?

It’s not looking like College Station. When you look at his performance, he’s actually done a pretty decent job. The problem is he’s getting paid more than “decent”. I’m not sure where he lands, but if I were another Power 5 program I wouldn’t be scared at rolling the dice on someone that has beaten Nick Saban in Tuscaloosa.

Jeff Holland and Derrick Brown. The Aggie defense has been able to hold its own against some powerful offenses for the most part, so it’s the Tiger defensive front that is the most fearsome. If they can get pressure with the front four it’s going to be another long night for the offense.

Christian Kirk against the Auburn secondary. Defenses have done a good job containing him with a safety over the top. The offense needs a big play or two from him to stay on schedule and open up the rest of the passing game. Its entirely possible for the offense to be atrocious and Kirk to win the game by himself. He’s done it before, just not against Auburn. Kirk has zero career touchdowns against the Tigers, so that means he’s due, right?

Auburn was actually my SEC West Champion pick in the preseason. Although they stumbled against LSU, they still have the defense capable of going toe-to-toe with Alabama. I like Auburn to pull the upset in the Iron Bowl and finish at least tied for first in the division. I know, I know. Picking against Nick Saban is a dumb thing to do, but then again, he hasn’t finished undefeated since 2009, so history is on my side this time. As for the Aggies, history points to 8-4 and that seems like a real possibility right now.

10. Is Fish Camp weird to you? It’s a little weird to me, and that’s coming from someone that graduated from Auburn.

Fish Camp is weird. But then again, there’s something about Texas A&M that is distinctly weird, in a very good way. Sometimes it’s not how you make the soup, but what the final product tastes like.