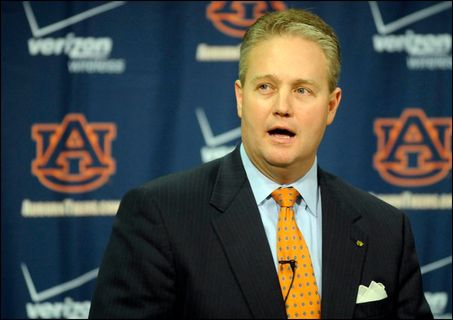 This was email was sent from Auburn Athletic Jay Jacobs to various Auburn season ticket holders and such last night. In the email, Jay extensively details Jordan-Hare Stadium’s recent improvements for gameday with the reasoning behind each. He also touches on ticketing improvements with a slight jab at the media for getting how the system works twisted. Necessary, IMHO.

As the plane prepared for its slow descent to Auburn, which is always the best part of my flight, pilot Ron Pilz pointed out the window.

Far in the distance we could see Jordan-Hare Stadium bathed in blue light. Then an electric orange. And then a white so bright we could have played a football game under the clear night sky.

I asked Ron how far out we were. His response?

The amazing thing was the “big board” we’ve all watched with anticipation wasn’t even on yet. Jordan-Hare was illuminated that night only by the 435 feet of “ribbon boards” on each side of the stadium.

I told Ron I couldn’t wait to fly again when the new video board is powered on. We might be able to see it from Birmingham.

Fans will finally get to see our new video board come to life on Saturday when we host Jacksonville State in Jordan-Hare Stadium. It will be the culmination of months of meticulous planning and terrific teamwork by an amazing group of professionals. It will be a day to celebrate our unrivaled gameday experience.

While construction of the video board began about six months ago, the vision that led to it was cast long ago when we made improving the gameday experience one of our strategic goals.

Other schools across the country have since discovered what we knew was important well before every game was on TV in HD: We have to continue to look for ways to preserve our rich tradition and enhance the gameday experience at the same time. We have to be relentless in looking for ways to get better so our fans and donors will want to keep coming back on those special autumn Saturdays.

That is why we have been strategically focused on finding out what our fans and donors want and then delivering on their desires.

A few years ago, surveys told us parking was a primary issue. So we added 2,000 free parking spaces. Even more parking has been added this year. Concessions were high on the agenda next, so we improved variety, cut the price of bottled water in half and reduced the price of hotdogs. We also added massive free water refill stations, and other schools came calling wanting to know how we did it. This year, we are adding a new “Restaurant Row” concept to give fans even more food options.

Connectivity has been a major concern for several years, and we have worked with Verizon to dramatically improve the cellular and Wi-Fi infrastructure. More than $12 million has been spent on a DAS and Wi-Fi system so fans will have a better experience trying to connect, communicate and share on their social media platforms. In one game alone last year, we had 26,000 fans connected to the stadium’s free Wi-Fi system.

The top two issues for fans the past several years were a new video board and sound system. We’ve addressed both in a big way. Literally. The towering new board will roar to life Saturday with more than 10,000 square feet of LED panels. That’s about a quarter of an acre. The video board will be complemented by the ribbon boards and a much richer and cleaner sound system engineered so that every fan has a better experience.

There are a host of other gameday improvements for 2015. You can read about some of them here on our website but let me mention a few. Many of them came from fan surveys and focus groups held over the summer.

Those are just a few of the many improvements in store this year. I would ask you to continue to send us your suggestions to me personally at athldir@auburn.edu.

One area donors and fans often ask about is our ticketing system. Auburn was one of the first schools in the country to develop a priority seating program decades ago, and our system has continued to reward loyalty ever since.

Historically, as long as Tigers Unlimited members renew their seats every year, they get to keep their same seat locations. Not every school does it that way, including some that reseat their stadiums every year in a process that can cause donors to lose their locations, but rewarding loyalty is the foundation of our ticketing program.

The media sometimes get confused about how it works, but my goal as AD is simple. I want to fill the stadium with Auburn fans. The ticket office conducts its business using modern technology so that goal can be fulfilled.

One area often misunderstood is how we end up with available tickets even after announcing a sellout. Just yesterday we announced that for the first time we are sold out of tickets for all seven home games before playing our home opener. That includes season, individual and group tickets. This strong demand for tickets is a testament both to the state of our football program and the strong support of fans and donors.

Additional pre-allocated tickets that we don’t end up using will still likely become available for some games even though we have announced a season sellout. A lot of issues come into play, but here’s how it works. Visiting teams might return unsold allotments days before the game, or the number of tickets needed for high school coaches or prospective student-athletes and their families might be below what we expected.

Tickets available to coaches or staff are sometimes returned to us just days prior to a game. So yes, the game is sold out, but we still have a few dozen, or sometimes a few hundred, last minute tickets available. We want to fill those seats with Auburn fans.

Our Ticket Office has to manage inventory for all of those contingencies, and they make every effort to sell every ticket that becomes available.

One new technology that will allow us to do that quickly and fairly this year is a program we are introducing called “ReplyBuy.” Any donor or fan will be able to sign up for a text alert system that allows them to receive notifications when tickets become available. They will even be able to buy digital tickets right from their smart phones.

The Ballena system has been a big success. It ensures greater transparency, improved accuracy, better service and absolute objectivity in the ticket allocation process. It is pretty simple: Donors with the highest priority get the earliest access to the best options.

The system works like this: On April 1, the donor with the highest priority has a five-minute window to log on and select or add seats. The system then goes through all of our donors in priority order. The dates and times for all donors to log on are staggered based solely on their priority. The higher their priority, the earlier they can log on.

Ballena was a vast improvement over the old process, when seats were allocated in priority order based on written requests. Donors often wrote “improve seats” on their forms, but what’s better for one donor might not be better to another. Some want to sit on the 50 yard line, but others may prefer the shade or being closer to an aisle. Other fans like the corners or even the upper deck. The 3D seat selection map puts all the power in the hands of donors, who can see exactly what is available and decide if it’s best for them.

Ballena is just one of many improvements we’ve made to our ticketing system the past few years. We’ve also added electronic tickets, print-at-home tickets, mobile delivery, Tiger Ticket Share for season ticket holders, Ticket Return (allowing fans to donate unused tickets to groups like Gameday for Heroes), pick-a-seat maps for both single game tickets and season tickets, and StubHub integration, which provides a quick and secure way for season ticket holders to sell tickets.

We are excited to roll out ReplyBuy this season, and we will continue to look for innovative ways to enhance customer service and fill up our stadium with Auburn fans in the fairest way possible.

The new video board and our home opener are reason enough to be pumped up this week, but I’m most excited about greeting some very special guests coming to Auburn. The second grade scholars from Schmid Elementary in Chicago who captured the heart of the Auburn Family last summer will arrive on Thursday.

Most of these young scholars have never been out of Chicago. With tears streaming down their faces during our visit to Chicago, Schmid teachers and parents told us this trip will be the opportunity of a lifetime for their children.

They will tour campus, meet professors and visit with coaches. They will get to ride horses, have their pictures made with the eagle, tour our world-class Fisheries facilities and see our veterinary school. They will even watch a drone take flight at Auburn University Regional Airport. Oh, and just like we told them in Chicago, there’s one more thing: They will be our special guests at Saturday’s football game.

Of all the moving sights and sounds we will see on our new video board this Saturday, the one we remember the most just might be the moment these young people appear on the screen.

The truth is we are the ones who will be truly blessed by their coming visit. It is a chance to impact their lives in ways that might not be evident until years from now. Who knows?

Maybe a child who first caught a glimpse of what great looks like while they were visiting Auburn will decide college is not just a far-fetched dream realized only by a privileged few. Maybe a child will decide they want to be a pilot, or a veterinarian, or even an engineer.

This week will be all about having fun, but it will also be about planting seeds. It will be about giving hope to people who need and deserve it.

I am grateful to Ward Swift, a member of my Executive Staff, for being the driving force behind this project from the beginning. I am also thankful for Auburn University for helping make it possible and for the donors who stepped up to fund practically the entire trip.

It has reminded us what the Auburn Creed and the Auburn Family are all about. It is about a belief in the human touch. It is about having sympathy and respect for our fellow man. It is about making a difference in the world, which Auburn does every day.

That is who we are. That is why we all believe in Auburn…and love it.