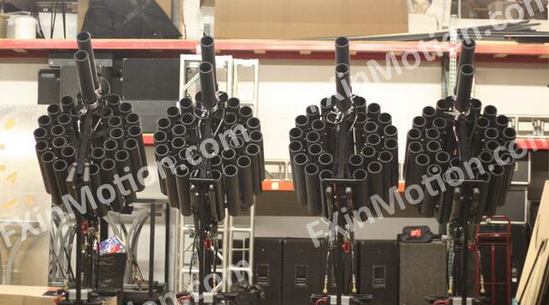 The US was never able to find Saddam’s weapons of mass destruction, but I may have just stumbled onto Auburn basketball’s next weapon of mass entertainment… and I’m not talking about Bruce Pearl.

Two nights ago, Assistant Athletic Director for Marketing & Sales, Jon Sirico, tweeted a picture of this massive wooden box from FX in Motion.

It’s always exciting to receive giant containers from @FXinMotion. Our fans will enjoy this one. #WarEagle pic.twitter.com/bwHkWvHJPW

I naturally began to wonder “WHAT’S IN THE BOX?!” so I took a look at the @FXinMotion Twitter feed. What I found was multiple tweets and retweets containing pictures and videos of a humongous t-shirt Gatling gun.

I then took took to FX in Motion’s website to get a little more info. There I found a huge list of the products they provide for fan entertainment. Based on the size of the box, I’m pretty sure it’s a huge t-shirt Gatling gun in the box. I guess it could be a Ball Blaster, but that’s a big box.

At first I thought this may be something for football, and I guess it still could be, but I know Jon Sirico works with basketball a lot and I don’t see how you’d roll that gun around the grass at Jordan-Hare. I guess we’ll find out if it’s dual-purpose in 3 days.

Anyway, that was a lot of work for a t-shirt gun, but if you show me a box, I’m gonna try and figure out what’s inside. Do you like the idea? I like t-shirts.

Update: previous versions of this post were all centered around this gun being in Jordan-Hare. I switched it to Auburn Arena because all of the pictures of the gun were at basketball games. I can prove it if I need to, but bottom line: my investigative blogling got that scoop. Hard-hitting stuff.

al.com Asked Me About Being Called a ‘Boog’