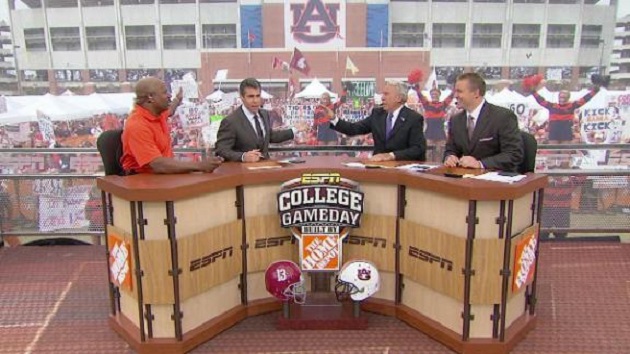 As you all know by now, ESPN’s College Gameday will be on campus for the MOTHER OF ALL IRON BOWLS this weekend. This will be the 8th appearance by the show in Auburn, and 14th involving an Auburn game. It will be Gameday’s 5th Iron Bowl, and the 3rd on Auburn’s campus (1995, 2011). Gameday has never been to Tuscaloosa for an Iron Bowl.

Since the only thing that matters in football games are past records and if Gameday is in town, here are a few numbers to compare against Auburn’s current situation (Gameday in Auburn, lower ranked team, Iron Bowl, etc.)

So yeah, who cares about numbers and past records? All pointless and stupid anyway, right?

One of my favorite parts of College Gameday is the guest picker. To be honest, though, the only one I remember in Auburn is Bo Jackson in 2011. I know there wasn’t one in 2010 for the Clemson game, but this year there are many new and likely candidates. Here are the ones I can think of in order of likelihood that they could be used.

So to recap, the numbers aren’t completely in Auburn’s favor if you care about past records when a certain TV set is outside the stadium, and Auburn has many viable, eclectic, and really cool options for the guest picker. We’ll see how it all shakes out Saturday.

If you recall, Barkley was the guest picker for the 2006 UF game and picked the score nearly perfectly. (If not for the last second TD by Auburn)

Do you think Cam Is a possibility of being a guest picker.

Someone mentioned to me Katherine Webb. What a let down that would be.

Is Octavia Spencer a football fan?

Tommy Tuberville will be at the game as well.

Tuberville may be the guy considering his record VS. Bama

I think both Cam and Fairly will be at the game also.