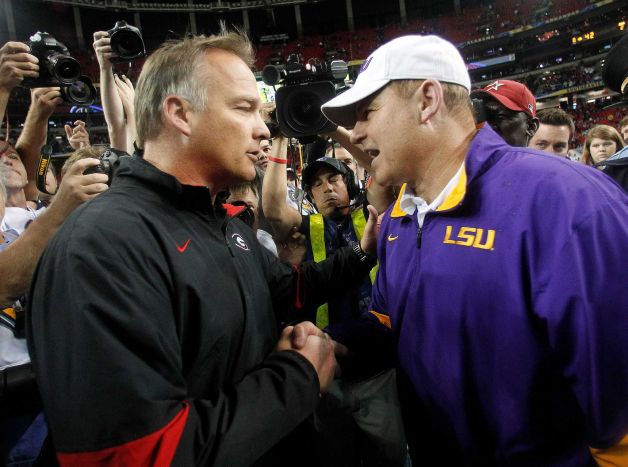 There are actually some decent games this weekend, and it couldn’t come at a better time with Auburn’s bye week. After four weeks of tailgating and traveling, I could take a week off to sit back, predict some games, and watch the money roll in. I’m just kidding. I don’t bet on games. I only play three card poker in Biloxi on the way to Baton Rouge.

Right now my predictions are hitting at a 85.0% click, but my against the spread picks aren’t so desirable. Probably better than yours, though. No? Well prove it.

Florida (-12.5) at Kentucky – Earlier in the season I picked Kentucky to be blown out by Louisville. That did not happen. Florida is without their starting QB for the rest of the year. Kentucky is at home. I think Florida wins, but it will be close for a while.

Texas A&M at Arkansas – The line for this game started off very low. Now there is no line. Something’s up. I don’t know what it is, but I think Texas A&M will drill Bielema as the Manziel-led hurry up kills the front seven for the Hawgs. Right there on the field. Travesty.

UAB at Vanderbilt – Is this a real game? Who would ever want this to happen? I just fell asleep thinking about it.

Arkansas State at Missouri (-21) – People are starting to get a little high on Missouri because it’s week 5 and they haven’t lost yet. Let’s see, they’ve beaten Murray State, Toledo, and Indiana. WATCH OUT! TIGERS ON THE LOOSE. I mean, they’ll win (while giving up a lot of points), but let’s slow down. The line on this one is kinda crazy by the way.

LSU at Georgia (-3) – I’m really torn on this one. They are both good, but they both have weaknesses. I think LSU will run for a ton, and Georgia will pass for a ton. I still think LSU is more complete, though. They’ll win semi-convincingly.

Ole Miss at Alabama (-14.5) – Everybody wants this to be a good game because it’s fun to say Ole Miss is a dark horse. They are not a dark horse. They are a slightly better than normal Ole Miss. It might be close in the 1st half because Alabama is not as good as everyone lazily wants them to be, but the Tide will pull away late in the game.

SMU at TCU (-19.5) – Meh, we want to act like TCU is the TCU that dominated the Mountain West for years. Now they are a mediocre at best Big 12 team. The problem with SMU is that they are worse than that. The Horned Frogs will gore the ‘stangs with their horns. Frogs have horns?

Virginia at Pittsburgh (-5) – Pitt beat Duke 58-55 last week. I can assure you I have never seen that score in football. I had to double check and make sure I wasn’t accidentally looking at the basketball score. Virginia has been blown out by Oregon and had a few lackluster wins. Playing at Ketchup Stadium will be enough for the Panthers.

Florida State (-21.5) at Boston College – Florida State is in the upper echelon of the ACC. I’m not sure how good that makes them. Boston College has won a few but lost badly to a mediocre USC team. Wow these two teams have beaten nobody, but the ‘Noles are better. NCAA 14 is on crack.

Army (-1.5) at Louisiana Tech – This game is here because of PickOrPlay.com chose it. I don’t have a clue, but I always go with America. Army wins.

Wisconsin at Ohio State (-7) – Oh, it’s the 2nd biggest game of the Big Ten year… and nobody cares.

Highlights of Auburn’s 19-13 Loss to Clemson

I really don’t understand why you are so down on Vanderbilt? They are the 4th best team in the SEC East right now, and they will probably beat Florida later in the year to move to 3rd.

Because I hate unwarranted little man love. People want Cinderellas so bad they make them up. 4th best in the East? Stop the presses.

No one is saying they are a cinderella. But compared to the Vandy of years gone by, they are so much better. All I’m saying is you act like they are the same Vandy from 5 years ago, when they deserve much more credit than that.