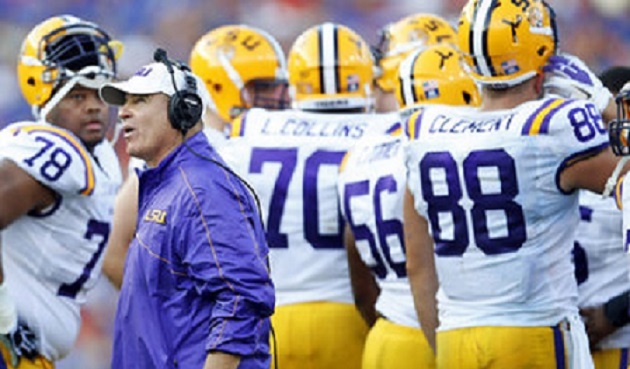 Jason Esthay (@TigerHype) runs TigerHype.com, an independent <corndog> website featuring LSU sports, news, and <corndog> opinions. You may remember Jason from this summer when he answered a few <corndog> questions about the <corndog> LSU Purple Tigers. On the real, though, he’s not the normal <corndog> fan I’ll be passing on the way to Tiger Stadium this Saturday. He’s actually a nice <corndog> guy.

1. What is an LSU fan’s first thought of Auburn football right at this moment?

Auburn is exactly where I thought they would be right now in the season (3-0, 1-0), with wins over a decent Washington State team , an average Arkansas State squad and, of course, a hapless (i.e. Dan Mullen-coached) Mississippi State team. I think I was expecting a little more defensively out of Auburn then what I’m seeing right now, though.

2. What’s the overall vibe in the LSU fanbase following two wins over cupcakes and one over a TCU that just isn’t what they used to be?

The vibe is good, despite the “quality” of the opponent. LSU has had a recent history of playing down to the level of their competition and letting off the gas early against lower-level opponents and, so far, we’re not seeing that this season.

3. It seems that Zach Mettenberger has been successful under Cam Cameron’s system this year. Is that something fans are excited about or are they considering the opponents?

It’s still exciting to the fans, especially when your QB is the highest-rated passer in the SEC over the likes of QB’s such as Manziel, McCarron, and Murray. This time last season, Mett was still struggling against weaker teams and there has been absolutely no sign of that same “struggle” this year, even against an experienced TCU secondary that featured All-American CB Jason Verrett.

4. Who are two new LSU Tigers that have shown out so far this season?

While not “new” to the team, first-time starters DT Ego Ferguson (leads team with 16 tackles, 2.5 TFL and 1 sack) and RB Terrence Magee (leads team in rushing with 212 yards, 8.1 YPC, 3 TDs) are really making a name for themselves at their respective positions.

5. Who are two Auburn Tigers that worry you based off their performances so far this season?

QB Nick Marshall and RB Tre Mason – Marshall because of his dual-threat capability (LSU had some difficulty containing TCU’s Trevon Boykin) and Mason because he’s a threat to break one from both the LOS and on special teams (LSU did give up a return for a TD against TCU). Defensively, no one really stands out as a “threat”, though Robenson Therezie could potentially cause us a few problems.

Miles’ voodoo actually ran out a few seasons back, but then he discovered that he could regain some of it by eating the grass in Tiger Stadium. When that quits working, we’ll give him a magic wand made out of corn dog sticks that was blessed by a voodoo priestess from New Orleans.

7. Of the voodoo-laden comebacks and last second wins that Les has over Auburn, which one was your favorite?

8. What is your score prediction of this week’s game?

Initially I predicted 28-13 with the game being close until the third quarter (14-10 at the half). After what I’ve seen out of both teams so far this season, I’m changing my final prediction to 31-14, with LSU leading at the half 17-7 and even that won’t be as close as it seems. Auburn has been giving up too many passing yards and too many first-half points and LSU will take advantage of it by exploiting Auburn’s under-performing secondary early.

Looking at the teams on your schedule and how they’re all playing thus far, I still think that the best possible finish that Auburn can hope for is 8-4 (allowing for one upset win, possibly over Ole Miss) but 7-5 would probably be more realistic. I’m still holding at 10-2 for LSU, but if Bama doesn’t find some consistency on both sides of the ball (poor offensive showing against VT and poor defensive showing against A&M) and A&M & Georgia don’t find some defense, then 11-1 and an SEC title game is a real possibility at this time as long as our offense doesn’t regress and our defense continues to develop.

10. I will be traveling to Baton Rouge this weekend. Give me two of the best places to eat. I don’t eat alligator or squirrel.

For “fine” dining, without alligator or squirrel as the main entree, I’d recommend either Jubans or Texas de Brazil. For game day “atmosphere” you may want to try Chimes, The Bulldog or, of course, Walk-Ons.

I really like these articles each week. Keep up the great work!

Walk-Ons and Chimes are awesome. The scenery at Walk-Ons is excellent, too.

Chimes and Walk-ons are both good choices. I’d prefer Chimes over the 2. TJ Ribs off I-10 at the I-10/12 interchange and Cheesecake Bistro (Mall of LA) are excellent choices too.

Here’s the deal with food in Baton Rouge. Most places (even chain restaurants) have culinary trained chefs or sous chefs that are going through culinary school. All the popular places have well prepared food. And Baton Rouge has a lot of home town places that are excellent. If you’re going to Baton Rouge, don’t don’t go to a chain restaurant IMO.