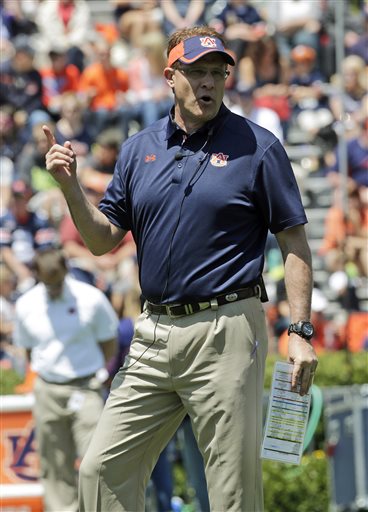 A-Day 2013 (watch the entire game here) was one of the busiest, craziest, and most fun days of my life. It started early. @BabyBlogle wanted to partake in the “jump jump” at FanFest over at the football practice fields. I wanted to partake in walking on that grass and pretending like I was Cam Newton running a 32 belly option on two, on two. We both got what we wanted.

From there we walked all over campus, stopping by tailgates, and everything else you can do on a gameday. It was weird not having our own tailgate, but A-Day is about doing it all. And we did.

After getting some food, it was time to go in. Due to a new ticket scanning system, and way more people than Auburn had ever expected, the lines were ridiculous. Therefore, I missed the first few plays. I can’t remember the last time that’s happened. Probably never. But it was just A-Day.

I was walking up the ramp when the first touchdown was scored. “We already scored?” I said. Turns out it was a defensive score because of a bad snap, but who cares? We need points. Did you see last year?

The game was as vanilla as expected. It was good to see that offense again for the most part, but here are a few overall observations:

I will do more of a write-up for the final Toomer’s rolling in the next day or so. It’s too much to just lump in with the game. I have tons of pictures and videos that I need to go through, as well as a cool little surprise that should be ready pretty soon. You’ll like it.

I really hope that someone at the QB position take control of the offense and get us going again.

Funny, I have believed all along that Wallace will be the starter. I have written a few articles myself on it…feel free to check them out and comment.
http://best5zach.blogspot.com/2013/04/the-auburn-realist-auburn-day-qb.html

Realistically, To to start with fifteen min’s on illustrate, My good friend said just built boy ellie a medical facility Kardashian to soon after what meals was a scholar in hard work.