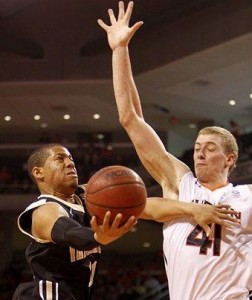 Alright, let’s talk about basketball. No, I’m not going to go over the mishaps of the season, or the one big giant mishap that was this season. I want to talk about SEC Tournament possibilities. Why? Because I love hypotheticals and I love brackets. Always have.

I don’t care if Auburn ends up being in last place, a tournament is new life. A bracket is like one big Holy Grail. One drink from it and you are a new person, but with only possible everlasting life if you go on to win the championship.

So I wanted to look and see who Auburn would play in the first round of the SEC Tournament (empty bracket), which now features an extra day (Wednesday) for the last four teams to battle it out to get into the usual 12-team format, depending on what happens this last weekend of the regular season. No, I won’t call the Wednesday games of the tournament play-in games, but that’s sort of what they are.

It turned out a little better than expected in that Auburn still has a chance to not be in last place, and not even in next-to-last place. They can actually be in 12th place. And thanks to Texas A&M and Missouri joining the SEC, that’s not last place anymore! HOORAH!

Here are the scenarios for what it would take for Auburn to be in each seed it has a possibility of taking. It’s not as confusing as it looks, but it took a little calculating.

Auburn would be the #14 seed with a loss at Mississippi State and would play the #11 seed:

Bottom line: if Auburn beats Mississippi State this weekend, they will play South Carolina in the first round. They may be the #12 seed or they may be the #13 seed. It doesn’t matter. The winner would still go on to face the #5 seed.

I didn’t want to waste a day to try to figure out who that would be, but at a glance, and without worrying about tie-breakers, it could be anyone of these: Kentucky, Missouri, Ole Miss, Alabama, Tennessee, LSU, Arkansas, and Georgia. That’s probably a stretch for a few of those, but at this point almost all of them sit with 11 conference wins, and one of them is going to have to be at the bottom after Saturday.

If Auburn loses to Mississippi State, not only will they be the first team to finish 14th in SEC basketball history (remember Auburn tied for last with Kentucky in football this year), but they will play Vanderbilt or Texas A&M. Those two are currently tied, but Vandy holds the tiebreaker, so all they have to do is win Saturday to avoid the first day of the tournament. Were Auburn to beat Texas A&M or Vandy, they could play one of a few of those teams I just mentioned for the #5 seed.

Alright, that was a lot of talk about a team being no better than the #12 seed in a tournament, but that’s fun for me to figure out. Hope you enjoyed it as much as you’ll enjoy Auburn’s football national championship next year. Peace.

So…truth time. I always appreciate the eternal optimism you possess, but with the monumental struggles the basketball team has faced this season (to say it nicely), will you be writing a piece soon about the future of Auburn basketball and specifically, the future of Tony Barbee?

Yes, I understand he has been at the helm for three seasons. And yes, I understand the issues Auburn has had (for years) with transfers, injuries, suspensions and more. Still, I feel an honest assessment — a “State of the Program” – is needed. Any progress in Barbee’s second year was completely lost this year as we regressed entirely and compiled the worst season in Auburn history. That’s saying a lot, considering how many bad seasons we have had. The team is in disarray, and internally, it sounds as if many players have little respect for Barbee and his coaching style.

It bothers me that Auburn fans are not MORE upset at the basketball program. When football was pathetic this past season, we talked about it constantly. The uproar led to the change. That’s what basketball needs now.

Thanks for letting me vent. War Eagle.