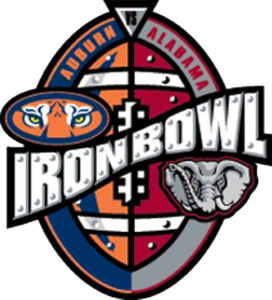 It’s here. The game we love to hate against the team we love to hate is finally here. You can throw out the record books in this one. Wait, no you can’t. The better team usually wins. I can only think of maybe two or three big upsets in the last 40 years. The better team this year is Alabama, the game is in Tuscaloosa, and they’ve somehow backed into another chance to get to the National Championship game. Every single odd imaginable is not in Auburn’s favor.

The betting line is somewhere around 34 points. It’s the biggest line for an Iron Bowl since they started doing lines, and I don’t mean the lines that Joe Namath used to do. It’s not even being looked at as a real a game by the national media. Analysts aren’t even giving it a passing thought. But that’s to be expected. I mean we are 3-8 and 0-7 in the SEC. Alabama is 10-1 and 6-1 in the SEC. It looks like a no-brainer.

I’ll even admit that it will take a small miracle for Auburn to put up a big fight this weekend, but as the sports cliche goes: crazier things have happened. Auburn was down 16-0 in the 4th quarter to the #2 Tide in 1972 and won 17-16. Auburn was down 24-0 to the #9 Tide in 2010 in Tuscaloosa and came back and won 28-27. Auburn was the better team in 1997, but found themselves down late in the 4th quarter when Ed Scissum fumbled, giving Auburn the chance to kick the game winning field goal and win 18-17.

So while the better team usually wins, it doesn’t mean the better team usually dominates. If Auburn can keep Alabama from dominating, they’ve always got a shot. We’ve seen Alabama look ordinary two of the last three weeks. Yes, I said ordinary. They’re a play or two away from being 9-2. They aren’t the unstoppable machine their weak schedule of the first two months had us believe.

But without a doubt, their stadium will be rocking on Saturday. There is no reason to throw fake money or play “Take the Money and Run” so maybe they won’t be as amped up as last time, but it’s going to take Auburn’s best performance of the last two seasons to muster up any sort of challenge. That’s just the truth. But I’m not saying it can’t happen. It can happen. We’ll see if it will.

Oh, but don’t let the slim chances keep you from taking part in the best part of a rivalry game. It doesn’t matter what the records are, you better talk trash. I’ve been doing plenty of it on Twitter. That’s what it’s really all about for the fans anyway. And if Alabama wins, you can just make fun of their fans. Auburn always wins at that.

As Paul Finebaum said: “This is the worst Auburn team in our lifetime.”

I agree with his assessment that we have zero chance this year. To pull off a miracle requires players that have heart. Save one or two guys (not enough to make a difference), we don’t have that this year.

I would love to be proven wrong this Saturday.

It would be a festivus miracle.

Wait a minute…not ridiculously predicting an Auburn win like you did against UGA? Come on! Put the orange colored glasses back on!