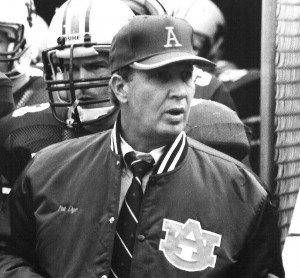 Patrick Fain Dye turns 73 today, which is pretty fitting given that it’s Georgia week. He played for Georgia if you didn’t know. I guess it’s been Georgia week for quite a few of his birthdays, but I’m just now noticing.

Dye was responsible for pulling Auburn out of the shadow of Bear Bryant and bringing the program back into the spotlight. Since he took over in 1981, Auburn leads the series with the Tide (17-14), Georgia (16-14-1), and has split with LSU (12-12). At this point in time, Coach Dye is still my favorite Auburn coach of all time.

The recent struggles of the football team mixed with ridiculous message board fodder and Finebaum-ism has caused certain fans to believe the notion that Dye is running the program from his tractor in Notasulga. On top of that, he’s running Victoryland, funneling secrets to Alabama and Georgia, and calling Scot Loeffler in the booth on gamedays. That’s all ridiculous. He has repeatedly said that he offers no advice unless he’s asked for it.

There’s also been much said about what he says on his weekly call with Finebaum. Most say he’s hurting himself and hurting Auburn with his brash truthfulness. I love it. How many old guys do you know that care what you think about him? None. He’s an old guy. He’s hard-nosed, and that’s how he’s always been. He knows more than most of us will ever know about Auburn, and he knows exactly what he’s doing.

Bottom line: he’s an old man on a farm that loves Auburn. That’s it.

Coach Dye did most of his coaching while I was a little Blogle, but I do remember a few things. Most memories, however, have come from watching those old “Decade of the 80’s” and “First Time Ever” VHS tapes. The games, and especially the wins were fun to watch, but where Coach Dye hit me the most was with his postgame speeches. Personally, that’s why he is my favorite.

He won, and for the people that personally experienced those wins, I know it was great to them. But for me, seeing how he coached and how he cared about the players was what made me respect him.

I know I’ve posted these videos probably a hundred times on this site, but we need to watch them today to honor the man responsible for setting Auburn up for the successes we’ve had for the last 30 years. Happy Birthday, coach.

Week 10 Predictions: It’s a Tough One

Thanks for reminding me why I love Pat Dye! I started going to the Iron Bowl the year after 17-16. I saw 10 straight defeats. Pat Dye brought victory and I helped tear down the goalposts in one endzone. What a time! War Eagle!!!

What, me? Crying? NO! There’s something in my eyes dammit!!! War Damn Birthday coach Dye!