It has now been over three months since the last mailbag entry. That is entirely too long. How have you managed? I know it’s been tough, but you’re all warriors. Anyway, let’s get back into it like we never stopped.

Close personal friend of the Blogles, @ImALegendKiller, writes in to tell us of a dream he had. It involved a certain Auburn football player. This is common and completely accepted among all male Auburn fans. There is no need to be ashamed… 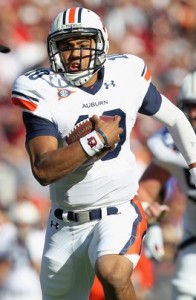 Last night while sleeping, I saw Kiehl Frazier lead us to a season opening victory, supported of course, by an aggressive D. O-Mac even took a kickoff to the house to give us the lead back for good. So, was this all a dream or is it a vision of things to come?

Well, obviously it was a dream. I mean, you were sleeping. But don’t let you think that it has to stop there. It could have been a vision from the great Auburn fan in the sky.

As I’ve blogled about a few times, prior to the 2010 season, while daydreaming of… well, that’s not important, before we had ever seen Cam Newton in an Auburn uniform, I had this quick vision of him running through and around multiple defenders. I then got this feeling that reminded me of the feelings I had in 2004. It was like I was given a shot of invincibility. I just felt like we were going to dominate.

And before you blow it off and call me crazy, I’m not kidding. This is real. A few coworkers can vouch for me. I was given a vision and it became real. So yes, while you were dreaming, you could have really been given a look into next season. Tell me what happens next.

Will S. wants to take this back down to serious land with a real football question…

Where do you see the team going with recruiting players for the new defensive scheme and how will the current players take to the new pro-style offense and will Frazier be able to shine in it?

I think the days of Mr. Tiny Linebacker are gone. They will not work with the aggressive, and NFL-style defense of the one they call BVG. They had their day in Auburn lore, and for the most part they played quite well, but I believe we’ll begin to see more of a Takeo-sized guy over someone who can easily drop back and play safety if need be.

From all reports, it sounds like the current offensive players have taken to the “new” offense pretty well. Admittedly, it is not 100% pro-style yet  by any means, and does still include a few Malzahn-isms, but it sounds like the transition has been as smooth as expected.

Frazier should and probably will be the starter based on how he was played in the A-Day game. Moseley, had a hurt shoulder, and is supposedly going to be given a full shot in the fall, but it may be too late. Frazier is obviously the future at QB for now, and he seems poised and ready to step in and take over.

Dan B. wants to get all nostalgic with a tough question that I may be able to answer…

Did Bo ever wear a number other than #34 at Auburn (namely #41)? I have the pre-Championship edition of the AU Football Vault, and while looking through it the other day, I came across a huge picture of Bo wearing a #41 Jersey. I’ve Googled this and not come up with anything, and I’m fairly sure I’m not crazy, so I was wondering if The Great Blogleini could shed some light on this. Was this a practice jersey, and if so why would they publish it? Or am I indeed crazy/seeing things.

I too have that same book and I too saw that picture of Bo wearing #41. I too was very puzzled, but then I realized that it was probably just the first jersey given to him during his freshman practices. I know he never wore it in a game, so it has to have been an early practice jersey.

As to why they would have published it, I would say that your original question is the reason. It’s something cool and nostalgic, and something that most people didn’t know about. Not even THE GREAT BLOGLEINI (which I shall be called henceforth) knew about it, so it’s definitely something vault-worthy.

Do Auburn fans/bloggers/beat writers have the best sense of humor in the SEC? I don’t follow other school’s fans/bloggers/beat writers so I have no point of reference, but I’m wondering if UGA fans made t-shirts with VanGorder’s mustache or if UF photoshopped Muschamp in a tacky sweater holding his cat in a Christmas card. Don’t misunderstand. I get a huge kick out of self-deprecating humor. I just wonder if Auburn leads the pack in this department.

Why thank you. I try very hard to be very entertaining. My mom always told me I was funny. But seriously…

I do think Auburn fans are the best at making fun of themselves while making fun of other schools because we’ve had plenty of opportunities over the last few years. With every hilarious accusation and allegation since 2010, we can now just sit back and laugh at how stupid all of it was. Think about the time and energy spent by millions of people to convince themselves and the rest of the world that Auburn was such a dirty, rotten place, only to be proven wrong in almost every way. We Auburn fans and bloggers got so used to it, that it got much easier to come up with a sarcastic or snide remark at the bombshell of the day.

Other schools do have some pretty funny blogs, but like in most things, they don’t really live up to Auburn’s. We are a unique, “us against the world” bunch, and I’ve always felt that if you make the joke before they can, they have nothing to say. Auburn fans for the most part do that, which ends up just making everybody else look stupid.

Thanks to everybody who sent in questions. That was fun. We really shouldn’t wait that long to do it again.