Unless you’ve been under a rock, or just don’t have Twitter, you know by now that Gus Malzahn is expected to be announced as the next coach at Arkansas State sometime tomorrow/today. Yes, Arkansas State.

At first it stung. Again, ARKANSAS STATE?!? That team we beat 52-26 in the 2010 opener?! I don’t understand. He turned down Vanderbilt and Maryland for that?! 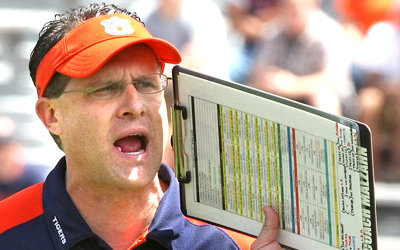 After reading the typical and expected tweets from rival fans and some seemingly uneducated national journalists, reason began to creep back in my head. It’s amazing how being defensive helps you come up with some pretty good and reasonable explanations.

Malzahn will reportedly make $800,000 a year at Arkansas State. This is all just rumor right now, but that’s the number being thrown around. If true, this is a pretty substantial drop from his $1.3 million deal that he signed with Auburn a year ago.

The first thought is why in the world would anyone take a paycut to go from Auburn to Arkansas State? Well first off, he’s not just moving to Jonesboro to do what he’s doing at Auburn. He’s going to be the head guy. He’ll make the decisions, and pretty much have nobody telling him what to do.

On that note, it was very obvious that Malzahn was not allowed to run his full offense at the pace he desired this year. In some ways, it appeared to be a good idea. Auburn struggled mightily at quarterback and on the offensive line, which limited the offense anyway. It appeared that Chizik told Gus to keep it as simple as possible. The more you open up, the more chances have to make mistakes.

As far as the pace, again with the Auburn offense struggling, there were lots of three-and-outs. If you run at a quick pace, while only running three plays, your defense has maybe 3-5 minutes to rest between drives. This was known as the Gus Malzahn effect. Maybe Ted Roof’s defenses weren’t so bad. Maybe they were just so tired because the offense was scoring or punting so quickly. No, I’m not entirely serious.

The bottom line is that Malzahn probably wasn’t entirely happy with the way he was allowed to run his offense this year. I can’t blame him, but I can’t totally blame Chizik, either. They were probably both right in some ways.

That’s the only semi-negative that I can think of that would make me think that Malzahn would look elsewhere. But then again, we’re not talking about looking elsewhere for a lateral move. We’re talking about moving up the chain.

Malzahn is an Arkansas native. He’s wanted to be a head coach for a while. He’s inheriting a team that just won the Sun Belt, but still at a school where he won’t be heavily scrutinized in his first few years of getting his feet wet. It’s also worth mentioning that former Arkansas State head coach, Hugh Freeze, is one of Malzahn’s best friends, and most likely helped sell Gus on the job.

Being the head coach at Arkansas State will be less stressful than being the offensive coordinator at Auburn. It’s a fact, and probably helps justify the drop in pay.

Malzahn had two really good years at Auburn, and one that was not so good for various reasons. He’ll always be part of the Auburn Family and always be one of my favorite coaches. I wish him well.

So what’s next? I’m glad you asked.

Recruiting. So far, I’ve seen one 2012 commitment tweet his displeasure, while another had no problem with it. It’s going to be tough to keep everyone committed, especially with Ted Roof being gone as well, but that all depends on who is hired as a the two coordinator replacements.

Candidates. We knew this was going to happen, and so did Chizik. He has names ready. I’m sure of it. The guy who knows Gus’s offense the most is Samford OC, Rhett Lashlee. He was a GA at Auburn last year. Chizik may not think he has enough experience, or Lashlee may go to Arkansas State. It was rumored that he would have gone to Vanderbilt with Gus had that happened last year.

Chad Morris, Clemson’s OC, is a Gus disciple, and would be a good candidate, but he just signed a huge contract extension.

As far as the guys who could run this offense right now without a hitch, these are they. But does Chizik want to run the Gus “we don’t call it the spread”? Wasn’t that sort of the problem this year? Or was it that the personnel/experience didn’t fit the offense this year? Chizik was planning on having this offense next year, but was he going to limit it again at the first sign of struggle? All good questions that I do not have the answer to.

On that note, I believe Auburn should stick with a similar style. The last three recruiting classes have been based off of this offense. We have the players to run it. A major change could cause big time athletes to jump ship and cause a major rebuilding project.

Kiehl Frazier. I have read and watched Frazier say that he came to Auburn for Gus Malzahn. He said wherever Malzahn was coaching, he would go there. He was recruited by Gus since the 8th grade, knew the offense, and wanted to play for him. So does that mean Frazier is gone? Will he sit out a year and transfer to Arkansas State? You have to think that one year in Auburn was enough to make Frazier realize that this is the place he wants to be regardless, but we’ll see.

Tonight/last night, Kiehl’s dad tweeted a congratulatory message to Malzhan as well as “It’s GREAT to be an AUBURN TIGER!!” That doesn’t sound like he plans on moving on from Auburn, but that’s not Kiehl.

Michael Dyer. This is a tricky one. Was Gus bothered by Dyer’s suspension? I would hope not. Was Chizik limiting Dyer’s role due to his rumored bad attitude, which limited Malzahn in calling his offense even more? That may have added to or been a part of Gus’s displeasure with how things were run this year.

Chizik said that Dyer has been “temporarily removed” from the team and will have to work his way back on the team. Will the departure affect Dyer’s decision on if he even wants to come back? Again, we’ll see.

Gus will go down as one of the greatest offensive coordinators in Auburn history. I hate to see him go, but I know that Chizik will bring in someone that can produce just as well. He’s done it before and he’ll do it again.

As Chizik says, “Auburn was great way before (Gus) got here.” Gus kept it great, and even more. Auburn won before Gus, and Auburn will win after Gus. We’re fine. You can take that to the bank.

I agree with all of the national “experts” that the Gus Bus was restrained this season. But I do not agree with those that point to Coach Chiz as the leash holder. The offense didn’t do itself a lot of favors with numerous three and outs but, at the same time, the defense stayed on the field an awful lot. Players (particularly QBs and O-line) had a lot to do with the lack of success too.

Blogler – what do you say to those that are worried about the type of recruits that have been brought to Auburn during Gus’s time – and how they were specifically recruited for his offense? These players would perform well in other offenses too, right?