We all had to know that Ted Roof would not return to Auburn next season, but none of us knew that it would be because he left to take the same position at Central Florida, as Auburn Undercover reported earlier this afternoon. My immediate reaction was that Chizik did the honorable thing and let Roof find another position before letting any information out to the public. You know, instead of just firing the guy on the way home from a family member’s funeral.

However, Phillip Marshall insists that Roof was not asked to leave or find another job. That doesn’t mean he didn’t feel the pressure or need to do so after the bowl game. I’m not the type to call for anybody’s head regardless of how bad they’ve done their job, especially since he’d do a better job than I would ever do, but it was time for Roof to move on. Roof even knew it himself. Otherwise, why would you give yourself a demotion? Roof did the tough and honorable thing, and I wouldn’t expect any different. 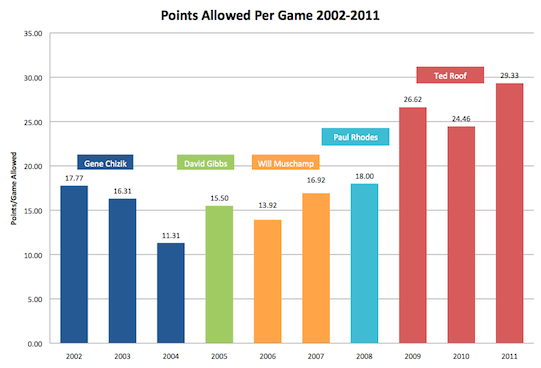 This graphic, created and sent to me by @robbielaney, is quite depressing, but amazing at the same time. While giving up that many points, Auburn still won 74% (29-10) of their games over the last three years. By the way, anybody remember that Chizik guy? Let’s get him back.

Roof, we love you. You’ll always be a part of the Auburn Family and a major part of the first of Auburn’s many championship over the next century. War Eagle Forever.

Ill admit I was one of the biggest mob members starting 3 years ago for ted roof to be kicked out. However now he’s going to UCF where ill be enrolled next year… Oh the irony!
Hope we get a great replacement I miss our old defense

[…] 2012 Schedule Rumor: UGA vs. Bama In Athens Texas Football: Was The 2011 Season A Success? Ted Roof (And These Numbers) To Central Florida Air Force Will Remain In The Mountain West Conference ch_client = "taleast"; ch_width = 450; […]

The graph’s representation of the numbers is striking. We do have to be fair and recognize that one of the guys to whom Roof is compared has been in charge of the entire team during Roof’s tenure.

I don’t understand this dynamic – how has the defense been so bad, regardless of the coordinator, while the head coach is the coordinator from 2002-2004?

Yes, I understand head coach is something of an administrative position from which responsibilities are delegated. And, I do not disapprove of Roof’s departure. I just find the disparity between the numbers from 2002-2004 and 2009-2011 difficult to explain.

I’d like to see those numbers along side some offensive numbers from those same years, particularly plays per game, or offensive snaps per game, time of posssession, etc. See if the theory of the “up-tempo” offense affecting defensvie performance holds any water. Another good metric to check would be 3rd down efficiency – I feel like that’s been the defenses achilles heel the past 3 years – our inability to get off the field and allowing teams to sustain drives. It wouldn’t hurt to check the average years of experience of the defensive starters on each of those teams either.

I’m not defending Roof or the poor defensive play, because it was pretty evident by just watching games. I just think you can’t just look at points per game as a decisive metric for judging the effectiveness of a defense.

Maybe someone with a Media Guide, Excel, and way more time than me can put something together!

I agree with jdinmacon. Would like to see # of offensive 3 and outs. But what has worried me was paul rhodes statement when he arrived at Iowa State “I was shocked when I got here, these kids can’t tackle” ted roof was not at iowa state and I think tackling has been the biggest problem the last 3 yrs

I’m not one to call for anyone’s head, and do feel Roof got a bit of raw deal in his time at Auburn. The rotating door of freshmen starters, losing a playmaker in the secondary like Mike McNeil because Mike McNeil’s a dummy; he had a lot of things working against him. But his name is attached to a little crystal ball sitting in a case somewhere, so my hat’s off to him.

Mark Stoops and FSU’s defense ranked 4th in the nation in points allowed at 15.2 which includes back to back 35-30 losses to Clemson and Wake. Granted, it was against the ACC, but that’s a lot of teams that like to air it out that FSU handled relatively well, whereas it’s an area that Auburn’s been getting torched lately, including last season. FSU simply had ZERO running game (118yds/game – Woof…) so the record really hides the good job he did. Maybe Dameyune Craig can convince him.