With Halloween and the “R— T—/War Eagle” premiere last night, I just flat out ran out of time to post the Mailbag yesterday. So here you get it on a Wednesday. But don’t worry, the Mailbag is just like pizza: even better one day later. 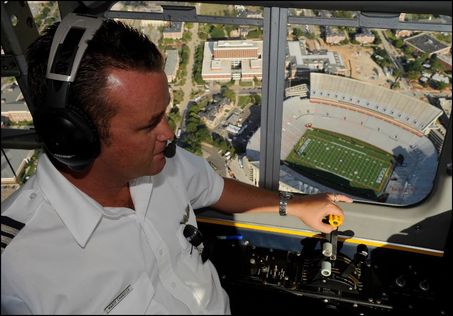 Why don’t we have fly-overs?

Auburn has had many fly-overs over the years. They just haven’t had one this season, and if I remember correctly, there wasn’t one last season either (Update: there was a fly-over for the LSU and Georgia games last year). I have a feeling it has to do with gas prices and overall spending. It ain’t cheap to get 3-4 jets to fly over your stadium, not to mention the fact that it’s just to have a cool 2-second effect before a football game. It just seems sort of wasteful, doesn’t it?

I do agree with most that they are awesome and definitely do get your blood pumping, but I think they are just reserved for “Games of the Century” at this point. And who knows, given the way that name is thrown about so easily these days, we may have another one pretty soon.

Brett Walker (@AUChief), who I met in Vegas before the National Championship Game, asks a very tough question about the SUPER BOWL TO END ALL WORLD HUNGER…

I have found myself in a bit of a quandary: Do I go with my gut and pull against Bama this weekend or do I hope for them to win so that we can crush their hopes and dreams along with their spirits in one fell swoop?

I always love to see Sabanation taken down a notch, but it is so much sweeter to do it ourselves (see: 28-27). The biggest problem is, if Bama beats LSU this weekend, the arrogance will reach a fever pitch that might become absolutely unbearable leading into the Iron Bowl. On the other hand the bigger they are the harder they fall, right?

To be honest with you, I have no idea. I see both sides of your argument, and I’m on the fence about this every time I see the Crimson Tide playing anyone but Auburn. I understand why people want to be Alabama’s only loss, but if we want Auburn to have it’s best postseason chances, that means the Tigers can not lose more than one game each season either.

I tend to look at the bigger picture and think that we want every SEC team to lose as many games as possible to help Auburn’s standing, especially the ones that have a better record at that point in the season. Since either LSU or Alabama will only have one loss and the other will obviously remain undefeated following this weekend, it’s pretty much a guarantee that either will win the West.

That being said, I still have no idea who we want to lose. Since we dislike Alabama more, I guess we choose them, but then some want us to be their only loss… dang it, I don’t know.

Update: I’m doing what’s best for the State and pulling for LSU to beat Alabama. This has to stop now.

Rod Guajardo (@rzg0002) was just as confused about a certain penalty called against Ole Miss as most, and he expects me to be able to explain it?!

What was the deal with the defensive delay of game call during the Ole Miss game? No one around me seemed to know what that call entails or why it was called. However, I’m pretty sure I was sitting in front of Early from Squidbillies, so that might explain the lack of explanation from my section. Can you break down that play and or explain what exactly happened?

I guess I’m the only one that remembers Auburn being called for the same thing in the LSU game in 2009 (just one of some ridiculous calls that night). Basically, defensive delay of game is exactly what it sounds like, the defense is delaying the game. This can be done by getting off the pile slowly, kicking the ball away so that it can’t be spotted quickly, or just moving slowly to keep the offense from getting set.

According to Chizik, the officials explained to him that the defense was slow out of their huddle. Now why it matters when the defense comes out of their huddle, I do not know. But that’s what he was told, and that’s why it was called. I have a feeling it may have been going on all night, and the officials may have warned the players, but eventually they had to throw the flag to get their attention. That’s my best guess.

St. Nicholas Cottrell makes his second appearance on the Mailbag with a question about Georgia…

So, obviously the big story this week was on the offensive end of things, with Moseley throwing more touchdowns than incompletions. But let’s talk about the defense for a minute. How do you feel the defense will perform against a surging Georgia team next week? If you’re Ted Roof, what would you be working on to prepare for that game?

First off, I don’t see Georgia surging at all. I see that they have played the worst teams in the SEC over their six straight wins: Ole Miss, Mississippi State, Tennessee, Vanderbilt, Florida. The only team missing from that list is Kentucky. To the untrained eye, the Bulldogs may have looked semi-impressive by beating Florida, but we all know those aren’t the Gators we’re used to seeing. Georgia started the season 0-2 and if they had played a real schedule since then they’d have many more losses.

To answer your question, I think the defense will do just fine. Georgia runs a traditional run-based offense, and Auburn has, for the most part, stopped those types of attacks pretty well recently. If the game was being played in Jordan-Hare, I’d guarantee an Auburn win, but since it’s in Athens, and given that this rivalry is just as unpredictable as the Iron Bowl, it’s still up in the air.

There was a flyover for the LSU game last year. I don’t know about any others.

The actual explanation of the lack of flyovers is due to a change in military policy. The new rule is that we can only have flyovers within seven days of a military remembrance holiday. Since Veteran’s day is November 11, an we have a bye game the weekend before and an away game the weekend after, there will be no home flyovers this year. I think we had two flyovers last year, before the implementation of this crappy policy.

And that crappy policy has more to do with budgeting than any thing else. Yes, we’ll see flyovers for the major bowls this year but I have a feeling that the bowl’s will be paying for a portion of the fuel.

Flyovers don’t happen at Auburn because there is someone in or associated with the band who does not like coordinating the flyovers….seriously. The whole “economy” myth of gas and cost is presented frequently, but it is not the whole story. The planes fly a set amount of training missions regardless. While it maybe true that less training missions are conducted on the whole due to the economy, the jets don’t just sit on runways until needed for flyovers or war, I can promise you that. Look at all these flyovers happening this month:

And that’s just the NAVY!!!

The Navy, Marines, Army, and Air National Guard ALL have sites and paperwork to fill out to apply for a flyover. They support them. In their eyes it is a recruiting tool. It only takes a couple weeks to get the paperwork approved. Once an event is approved (usually has to be within some time frame of a military holiday), it is simply a matter of the local commanding officer scheduling the already required training missions around the desired flyover time. I’ve researched this thoroughly and have links to all the divisions websites and paperwork.

I’ve asked multiple people who work in Athletics and have been told whoever this individual who is against flyovers simply doesn’t like having to work the band’s pre-game schedule/routine around this. Hopefully I’m wrong, and that is not true…because that sucks if some petty individual is preventing something as awesome as a flyover because of his/her preferences. I have statistics showing that in the past 10 years, our win rate in games where we have flyovers to be 94%. In games with no flyovers, we fall to roughly 82%, and in my mind, that is not coincidental. I believe flyovers are to the fans what the fans are to the football team.

All that being said, I have heard there WILL be a flyover for the bama game.

There won’t be flyovers for the major bowls. There are five approved dates: veterans day, pow/Mia day, armed forces day, memorial day and Independence Day. Only two of those are in football season: September 22nd and November 11th. Both of those dates have been flanked by Auburn away games. The band coordinator honestly doesn’t have much to do with it, he just holds a radio day of. The organizer for Auburn is the Navy ROTC aviation officer for the naval flyovers, Air Force officer for the AF squadrons. It honesty depends on how much those guys work on getting flyovers. That being said, we had a guy that got as many naval flyovers as possible last year, one for LSU and one for Georgia I believe. At least one squadron was from LeMore, CA.

they have flyovers at nearly every NASCAR race.

I am glad to know that it’s not up to that band guy. Flyovers have a special place in my heart, and I hope they increase in frequency. REALLY looking forward to the Iron Bowl one (from your comment below)!

Correction to that: the Navy only has those rules, not the Air Force. From what I hear, we will have a flyover of F-16s for the Alabama game!

We always have Stealth Fighters flyover for every game. I can’t believe you miss them!

I know this doesn’t really matter, but there was also a flyover at the UGA game last year. I had my fancy camera with me and got a shot of the jets.

It totally matters. Thanks for reminding me. Now I’ve been wrong twice in this post.

There was a flyover at the Alabama-Tennessee game just last weekend! It has nothing to do with the economy.