It’s Mailbag, Mailbag, gotta get down with Mailbag. It’s only Tuesday but everybody’s looking forward to the weekend, weekend. Alright, just stop ‘Blogle.

Chris Pollone, yes THE Chris Pollone (@ChrisAla13) of NBC 13 in Birmingham, wants to talk about Trotter and Moseley. Ok, Boloney, if you insist… 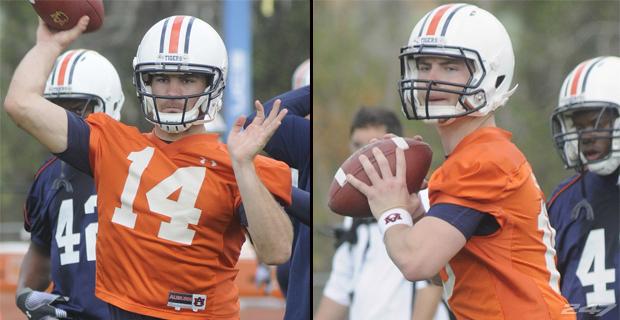 Did the coaching staff make a bad call in starting Trotter over Moseley this year, and did they stick with him too long?

I don’t think we can answer that just yet. We have yet to see Moseley play a full game in a situation where he’s given longer than two seconds to think of what to do with the ball. I will say that I don’t think they made the wrong initial decision to go with Trotter. He seemed like the obvious choice to me once Cam left, and he must have showed that he should have been the starter all throughout fall camp.

And let’s not act like he was bad all year. Somewhere around the 2nd half of the Clemson game, the offense stopped clicking. The injuries to Blake and Reed hurt as well. It’s hard to look good throwing the ball when there’s nobody to throw it to, or at least nobody that can consistently catch it. If Moseley doesn’t add any major spark against Ole Miss, I wouldn’t mind seeing Trotter go back in.

As far as sticking with Trotter too long, they might have left him in for a half or two too long. There were some situations like against Arkansas where I either wanted them to put Frazier in full time or give Moseley a series or two. But I don’t make those decisions. The National Championship coaches are paid to do that, and I trust whatever they decide to do.

St. Nicolas Cottrell wants me to get a little more specific about Moseley. You want specifics? I’ll give you specifics.

What do you feel were the upsides of Moseley at quarterback this week? How do you see him developing over the remainder of the season?

Without getting too specific, I’d say the upsides for Moseley against LSU was that he was able to position himself in a way that when he took hits his head did not completely spin around or pop off and land somewhere in the seats. Can you imagine what those people would do to a severed head from a rival quarterback. Let’s just not even think about that, ok?

Seriously though, Moseley made some good throws when he had the time, and he definitely showed more escapability (that’s not really a word) than Trotter has this season. As much as I hate the term “gunslinger,” that’s exactly what he looked like in a few situations. I think it was the third quarter where he broke a few tackles, ran around a little bit, and completed a pass to Benton. That was good to see.

I’m not sure of his development for the rest of the season. I know he’ll get better as he gains more experience, but I have to believe that he knows that Frazier will probably end up being the starter next year. I just don’t see Trotter or Moseley taking that spot once Frazier gets a grasp of the entire offense. I don’t doubt his playing ability, but we all know Frazier is better and that Malzahn is grooming him to be the future. We’ll just have to see what Clint does for the rest of the year, if he’s given the chance.

Drew Scelsi has a bevy of questions. Let’s knock em out one by one.

1. Is it wrong to root for Bama when they’re not playing Auburn? Don’t get me wrong I’m not saying I like them, nor will I ever utter the words r*** t***, but I’m an SEC fan (secondary to being an AU fan of course) and I’d much rather see a B1G school lose than an SEC school.

I wouldn’t say it’s wrong. Sometimes we, gulp, need the Crimson Tide to win to help Auburn’s situation. So completely being against it is not a must. Although it’s very hard to ever pull for them to win, I’ve just gotten to where I don’t care what they do. I pay attention to Auburn’s games and that’s pretty much it. And yes, I am an SEC fan too, but I can’t say I’ve never pulled against an SEC team in favor of another conference’s team. I’m usually going to pull for whatever would help Auburn in the polls or whatever.

Any tips on a clever sports blog name? I’m trying to incorporate my name (Drew) or something into it.

Why would you want to do that? I mean it’s just inevitable that your “blog” would be squashed by the all-powerful WarBlogle.com. I wouldn’t waste your time.

But no seriously… I don’t have any good ideas for names at the moment, but I would just try to mix something Auburn related with whatever approach you want to take with writing about them. “WarBlogle” was the first thing that popped into my head when another guy and I thought about doing this back in 2007, and I’m pretty proud and happy with it. I wouldn’t say the name is the most important thing about a website, but if it’s catchy, it will attract attention before anybody even reads your stuff.

Will you be at the Samford game with a ‘Blogle tailgate?

I have not missed a home game in twelve years, so of course I will be there. As far as tailgating, I will be doing that as well, but it won’t be an official WarBlogle tailgate (whatever that is). As I’ve been for the past five years, I’ll be at the corner of Roosevelt and Mell. Stop by and say hello. In fact, all three of you that are reading this should do the same.

My Brit brother from another mother, Ross Collings, wants talk about the day the Earth stood, or will stand, still.

What is your view on the Super Bowl being played on November 5th?

I don’t know about you, but every time I think about it, I get chillbumps. Am I the only one? Think about it, this is the first time 64 1st-round draft picks will ever take the field at the same time. 64! This is the first time two college teams that would beat the New England Patriots and Green Bay Packers on their best days will meet meet on a college gridiron. I heard they aren’t even playing it on grass. They are bringing in some sort of synthetic gold. Wait, what’s that you say? Synthetic grass? Keep the Honey Badger away from it. And isn’t it true that gold is bad for your stomach? Sorry, Les.

F’real ‘doe. It’s just a football game, people. They are two good teams that are both undefeated. After the game, one will have a loss, and the world will continue spinning. I know it’s been sort of a boring football season, but are our lives so boring that we have to talk about a regular season game for an entire month? Given the hype that’s surrounding this game already, it is now a given that one team will win by at least two touchdowns. It’s just how the world works. Check it.

From the Other Sideline – Ole Miss (Summer Edition)

Love the mailbag! I always cheer for Bama when they play. They’re just not that important for me to hate that much. I like to save good hatred for non-con foes like Clemson-much more fun!

How do we all know Frazier is better than Moseley? I understand that KF was much more highly rated coming out of high school, but so far Moseley has proved to be a significantly better passer. More reps, 1 more year in the system… sure, I get that. But while one can’t assume that KF won’t be starting next year, it seems, at this point, a bigger stretch to assume that he will be. WDE

On ESPN’s “Depth Chart,” Gus Malzahn states that Kiehl Frazier is easily the most talented of the three, but he just doesn’t have the experience yet. That’s all I need to hear.

As far as him being a significantly better passer, I don’t think we can base that off of 1.5 games worth of play by Moseley. Not to mention that Frazier has only thrown the ball 10 times all year.

and that his first forward pass (at Arky ::shudder::) was in interception…::sigh::… KF is the future; but we have to wait for the future to get here.

I have to say; I hate all the “fire Roof” and “Put Moesley/KF in!!” talk. Really? REALLY?!?!?! So you’re telling me that if you were paid $1.5 MILLION to fix nuclear reactors, but someone came up to you and said, “hey, you need to cut the red wire, not the blue one”… You’d listen? I’d guess not. These guys got where they are because they are awesome. Let them do their job, and we’ll let you do yours…

P.S.- Good luck in Japan and that nuclear reactor….

I agree, let the coaches do their jobs.

Love the mailbag, never can think of good questions to ask for it. I keep meaning to come visit the tailgate since I actually live in Auburn but some amber beverage always makes me forget.. I vow to meet the actual WarBlogler soon. On a side note, I think I may have just decided on my Halloween Costume. Now where do I get my “I may or may not be the WarBlogler” shirt? Oh yeah! The store! War Damn Blogle!